Vietnamese Deputy Prime Minister and Foreign Minister Pham Binh Minh held talks with UK Secretary of State for Foreign, Commonwealth and Development Affairs and First Secretary of State Dominic Raab in Hanoi on September 30, during which they agreed on joint efforts towards a higher level of the bilateral strategic partnership. 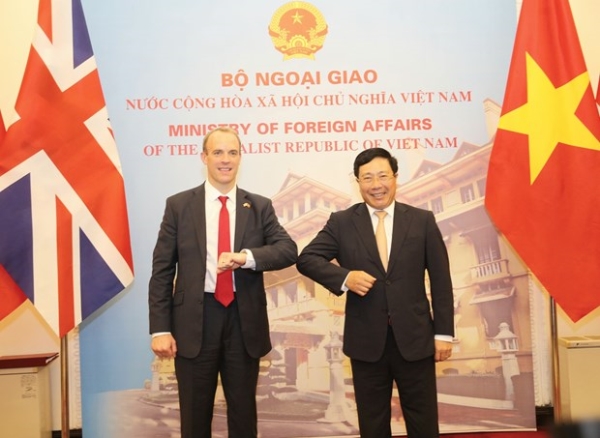 Minh welcomed Raab’s official visit to Vietnam on September 29-30, which takes place at a special time when the two countries are celebrating 10 years of their strategic partnership, believing that the trip will create new momentum for the bilateral relations.

He affirmed that Vietnam always considers the UK a leading important partner and highly values the latter’s role on the international arena.

For his part, Raab expressed his delight at his first visit to Vietnam and that he is the first European politician to come to the Southeast Asian nation since the COVID-19 pandemic broke out.

The UK Government wants to effectively promote the strategic partnership with Vietnam, and it also appreciates Vietnam’s increasingly important role and position in the Asia-Pacific and Southeast Asian regions, he stressed.

At the talks, both officials noted with satisfaction that since the Vietnam-UK diplomatic ties were founded in 1973, especially since the establishment of the strategic partnership in 2010, the bilateral cooperation has been developing extensively and effectively.

They underlined the determination to build a new vision for the Vietnam-UK ties for the next 10 years and make joint efforts to develop the strategic partnership to a higher level.

They agreed to build plans to resume all-level delegation exchanges when possible and increase substantive content in cooperation mechanisms, especially the security-defence strategic dialogue, the joint committee on economic, trade and investment cooperation, and the defence dialogue.

The two sides shared the view that their countries’ economic links have grown impressively, with bilateral trade hitting 6.6 billion USD in 2019 and the UK’s direct investment in Vietnam reaching 3.7 billion USD.

The officials also agreed to facilitate partnerships between Vietnamese and UK businesses and investors, particularly in the areas the UK has strengths and Vietnam has demand for like high technology, telecommunications, oil and gas, finance, banking, insurance, renewable energy development, and smart city building so as to help with post-pandemic growth recovery and make use of the shift of supply chains and investment. 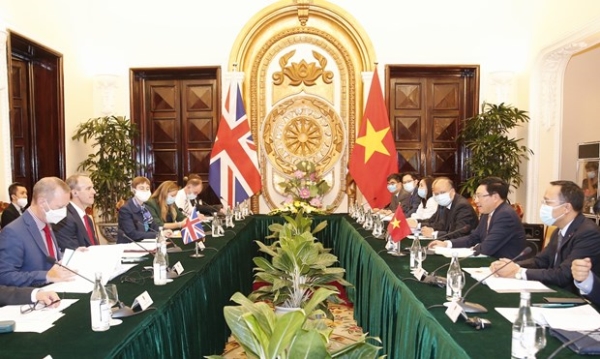 The talks between the Vietnamese and UK officials in Hanoi on September 30 (Photo: VNA)

Meanwhile, Raab thanked Vietnam for agreeing to apply this deal to the UK in the Brexit transition period, reiterating the country’s commitment to soon finalising the negotiation on an FTA between the two countries so that it can take effect early.

Besides, they discussed ways to enhance connections in important spheres such as security-defence, development cooperation, education-training, science-technology, sustainable development, people-to-people exchange, as well as cooperation between the two foreign ministries so as to help reinforce the strategic partnership.

They also spoke highly of Vietnam-UK cooperation at multilateral forums, especially when Vietnam concurrently serves as ASEAN Chair in 2020 and a non-permanent member of the UN Security Council for 2020-2021.

The two countries will enhance coordination to boost the UK’s ties with ASEAN and to prepare for the UN Climate Change Conference (COP26) that the European nation will host next year.

At the talks, Minh and Raab also exchanged views on international and regional issues of mutual concern.

They emphasised their support for multilateralism, a rules-based regional and international order, and international coordination to cope with common challenges like maritime security, climate change, and the COVID-19 pandemic.

Both officials stressed the importance of maintaining peace, stability, security, safety and freedom of navigation and overflight, resolving disputes via peaceful measures, not using or threatening to use force, and respecting international law, including the 1982 UN Convention on the Law of the Sea (UNCLOS).

They voiced their support for the Chairman’s Statement of the 36th ASEAN Summit and the joint communiqué of the 53th ASEAN Foreign Ministers’ Meeting, which affirm that the 1982 UNCLOS is the legal framework regulating all activities in the seas and oceans.

Concluding the talks, the two sides issued a “Joint Declaration on the Vietnam-UK Strategic Partnership: Forging Ahead for Another 10 years”.

Meanwhile, Raab affirmed the UK’s support for ASEAN’s central role and highly valued the bloc’s achievements in the community building.

He also announced the UK’s aid package worth 50 million GBP for ASEAN’s response to COVID-19.

The UK also proposed stronger cooperation in maritime security, the law of the sea, and climate change response./.