Vietnam on Thursday reaffirmed its sovereignty after the U.S. Embassy removed from its Facebook page an accurate Vietnamese map including its East Sea archipelagos.

"Vietnam has consistently maintained the Hoang Sa (Paracel Islands) and Truong Sa (Spratly Islands) as inseparable parts of the Vietnamese territory. This consistent stance has been taken multiple times in multiple forms, including at the United Nations, and is supported and respected by many countries," Foreign Ministry spokeswoman Le Thi Thu Hang said at a press meet Thursday afternoon. 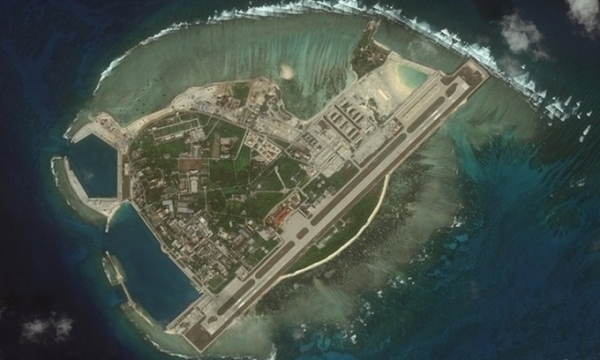 She was asked about Vietnam’s reaction to the U.S. Embassy in Hanoi uploading on Facebook a map of Vietnam including the Paracel and Spratly archipelagos on September 9, but later replacing it with an image without them.

The map had been uploaded as part of a post commemorating the opening of the 53rd ASEAN Foreign Ministers’ Meeting (AMM 53) and other relevant meetings.

Hang reiterated that Vietnam has full legal basis and historical evidence to assert its sovereignty over both archipelagos under international law.

The East Sea is internationally known as the South China Sea.

The U.S. has said in the past that it has interests at the South China Sea and doesn’t side with any party on disputes in the area. It has said that it supports peace, stability, freedom of navigation at sea and in the air in the South China Sea. It has called on relevant parties to resolve conflicts through peaceful methods and abide by international law, including the 1982 United Nations Convention on the Law of the Sea (UNCLOS).

In July, U.S. Ambassador to Vietnam Daniel Kritenbrink said the U.S. would increase diplomatic activities with partners in the region, including ASEAN, help countries improve their maritime capabilities and develop the U.S.’s military capabilities, including activities to protect freedom of navigation at sea, in order to maintain stability in the South China Sea.