The “blue checkmark” Facebook page U.S Embassy in Hanoi, an official account of the US Embassy to Vietnam has posted an article looking at the United States – Vietnam partnership during the last 25 years, in which the map of Vietnam has fully depicted with Paracel (Hoang Sa) and Spratly (Truong Sa) Islands in the South China Sea or Bien Dong Sea.

Accordingly, the article was posted right after the opening of The 53rd ASEAN Foreign Ministers’ Meeting (53rd AMM), at which Vietnam presided. The significant event took place from September 9-12.

In the article, the US Embassy hailed the breadth and depth of cooperation between Vietnam and the US in all fields from business, education, health, energy to security. “As trusted partners, we prosper together!”, stressed the US Embassy. It also used the map of Vietnam with Paracel (Hoang Sa) and Spratly (Truong Sa) Islands. 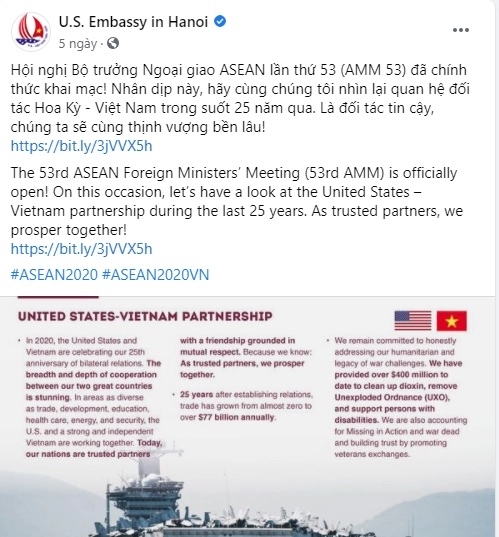 The US Embassy in Hanoi updated the article noting the US- Vietnam relationship over the past 25 years on September 9.

Recently, China has launched many activities that violate Vietnam’s sovereignty over the two islands, Paracel (Hoang Sa) and Spratly (Truong Sa). China has publicized the revision of Technical Rules for the Statutory Testing of Seagoing Vessels on Domestic Voyages, which had been published in 1974.

China has established the so-called "Hainan-Xisha Navigation Area" in a recently changed document as posted on South China Morning Post on July 31. The area is bound by two points on China’s Hainan Island and three in Vietnam’s Hoang Sa Islands, which China calls the Xisha Islands, the paper added.

Foreign Ministry spokeswoman Le Thi Thu Hang said: "We consider China bringing Vietnam’s Paracel Islands into the 2020 Technical Rules for the Statutory Testing of Seagoing Vessels on Domestic Voyages as a violation of Vietnam’s sovereignty over the Hoang Sa (Paracel) Islands and not beneficial for the maintenance of peace, stability and cooperation in the East Sea".

China had seized the Paracel Islands from South Vietnam by force in 1974 and has been illegally occupying it since. The country has also been ramping up its aggressive behavior in the South China Sea since the start of this year while other countries have had to focus on combating the Covid-19 outbreak, including announcing the establishment of the so-called "governed" administrative districts over Vietnam’s Truong Sa (Spratly) and Paracel Islands, sinking Vietnamese fishing vessels and unilaterally ordering a ban on fishing in Vietnamese sea territory.

In a related move, speaking at the 10th East Asia Summit Foreign Ministers' Meeting within the framework of AMM 53 and related conferences on September 10, US Secretary of State Mike Pompeo committed support ASEAN in protecting the law, respect sovereignty and transparency in the South China Sea and the Mekong region, as well as criticized China's threats in the region.

Pompeo also emphasized that the US will raise the voice against China’s provocative and threatening activities that have escalated recently relating to the sovereignty of countries in the area. “The US is committed to working with partners in the Indo-Pacific to uphold the rules-based order that has underpinned security and prosperity for more than 70 years”, said US Secretary of State.