The record trade surplus Việt Nam ran in the first eight months of this year amid the COVID-19 pandemic was not necessarily a good thing, experts have said. 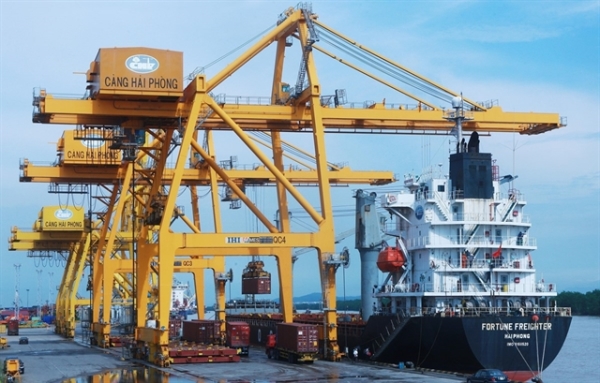 Containers being loaded at Hải Phòng Port. The record trade surplus Việt Nam ran in the first eight months of this year mainly came from a drop in imports. — VNA/VNS Photo

A trade surplus helped increase foreign exchange reserves, which was a good thing, Phương told Hải Quan Online. However, the record trade surplus from January-August amid the pandemic triggered concerns because it did not come from an increase in exports, but rather from a decrease in imports.

Statistics from the Ministry of Planning and Investment showed that exports totalled $174 billion in that period, up 1.4 per cent, but imports fell 2.2 per cent to $162 billion, leaving a record trade surplus of $11.9 billion. The domestic economy sector ran a trade deficit of $11.2 billion, while the foreign-direct-investment (FDI) sector saw a surplus of $23.1 billion.

Updated trade figures from the General Department of Customs were slightly different, with exports at $175.36 billion, up 2.3 per cent, and imports at $161.9 billion, down 2.4 per cent, which left a trade surplus of $13.5 billion in the first eight months of this year.

Phương said the drop in imports meant a drop in capital goods, which was a worrisome problem, adding that some 90 per cent of Việt Nam’s imports were capital goods while the remaining 10 per cent were consumer goods.

A decrease in capital goods would affect production in the future, Phương said.

He also noted that Việt Nam’s trade surplus largely came from the FDI sector, which managed to keep orders and maintain a supply of raw materials for production amid the pandemic.

According to trade expert Phạm Tất Thắng, the decrease in imports of capital goods was due to firms not having orders, so they were not importing raw materials. The other issue was disruptions to supply chains, Thắng said.

Building sustainable and resilient supply chains were of special importance, Thắng said.The decrease in imports could be due to the fact that businesses were not very optimistic about their export opportunities in the immediate future, which might make the post-pandemic economic recovery more difficult, expert Trần Toàn Thắng said.

On the other side, a large trade surplus would help the country build more foreign exchange reserves to stabilize the exchange rate, he said.Expert Nguyễn Trí Hiếu said that if imports continued to fall, there would be a shortage of raw materials for production, which would affect the post-pandemic recovery.

The Ministry of Industry and Trade forecast that imports and exports in the second half of this year would be more positive than in the first half, especially when a number of countries started to loosen measures to control the spread of the virus and focused on implementing measures to accelerate economic growth.

The ministry added that the enforcement of the EU-Việt Nam Free Trade Agreement from the beginning of August would create significant opportunities for imports and exports in the remaining months of this year.