One hundred and twenty outstanding ethnic minority students and youths in 2019 reported their achievements to Uncle Ho at a ceremony at Ba Dinh Square, Hanoi, on November 12.

The delegates expressed their infinite gratitude to beloved Uncle Ho, who strived and sacrificed his life for the independence and freedom of the nation. His moral thoughts and style have become extremely valuable heritages, paving the way for Vietnam’s revolution. Before the soul of President Ho Chi Minh, the delegates committed to memorize Uncle Ho’s teachings, striving to study and follow his examples.

Speaking at the ceremony, Le Cong Binh, Deputy Editor-in-Chief of the Ethnic Minority and Development Newspaper, Head of the Organising Committee of the ceremony to honour outstanding ethnic minority students in 2019, said that, over the past time, the quality of preschool and general education in mountainous areas has had positive changes. In particular, the achievement of ethnic minority students in the 2019 academic year has increased in both quantity and quality. 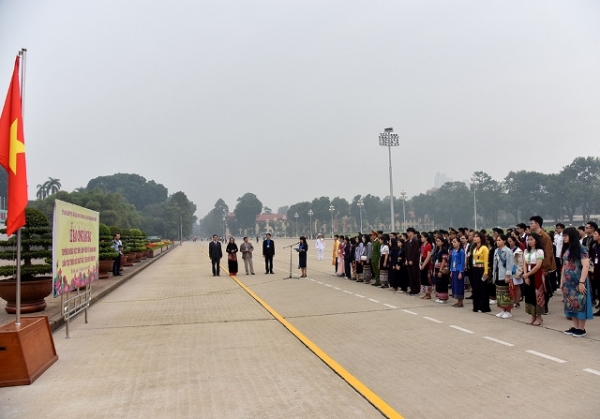 The annual event aims to honour and encourage the spirit of striving, overcoming difficulties and challenges to achieve outstanding achievements in studying and participating in social activities of pupils and students.

A ceremony to honour outstanding ethnic minority students in 2019 will take place in Hanoi at 8.00 pm on November 12.