Vietnam raked in 30.05 billion USD from exporting agro-forestry-aquatic products in the first three quarters of 2020 and the value is hoped to hit over 40 billion USD for the whole year, said Deputy Minister of Agriculture and Rural Development Phung Duc Tien. 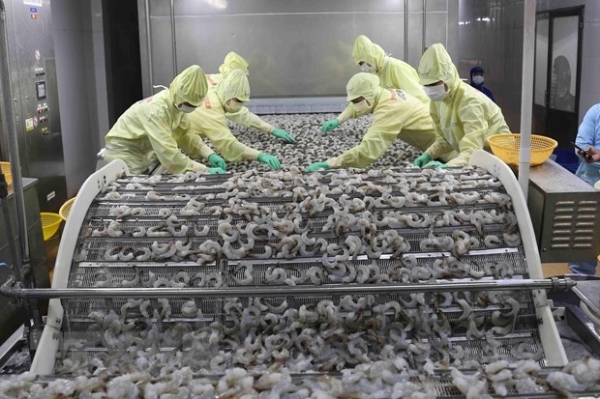 Speaking at a regular press conference  of the Ministry of Agriculture and Rural Development in Hanoi on October 6, Tien said since the European Union (EU)-Vietnam Free Trade Agreement (EVFTA) came into effect, Vietnam's agro-forestry-aquatic product exports to the EU market have reached 766.3 million USD.

The export turnover in August increased by 11.5 percent compared to July, while that in September surged over 30 percent against July, he noted.

Commodity sectors need to pay attention to standardizing seed, production process, transportation, and processing, to fully tap the agreement towards realizing the set goal, he said.

Reports presented at the press conference showed that although the area of food crops has slightly decreased this year due to crop conversion, the food production output is forecast to reach at least 43 million tonnes.

The livestock industry has recorded stable development as the diseases on cattle and poultry have been controlled basically. The Ministry has coordinated with other ministries, sectors, localities and businesses to implement many solutions to ensure food supplies for domestic consumption and export.

As a result, the livestock sector recorded the highest growth in production value in the third quarter, reaching 9.67 percent.

Meanwhile, the value of fishery production in the third quarter was up 2.5 percent over the same period last year, resulting in a year-on-year rise of 2.48 percent in the first nine months.

Due to the impact of the COVID-19 pandemic, wood processing businesses have been facing difficulties as many wood export orders were cancelled or delayed.

A total of 1.42 trillion VND of forest environment service fees were collected in the reviewed period, reaching 50 percent of the set plan in 2020 and equal to 76 percent compared with the same period in 2019.

Tien said that the industry is focusing on measures to restore the production, processing and export of forest products.

It is expected that the forest coverage rate will reach 42 percent, while the export turnover of forest products will definitely hit over 12 billion USD this year, he added./.