The eighth International Conference on the East Sea, themed “Cooperation for Regional Security and Development”, wrapped up in Nha Trang city, the central coastal province of Khanh Hoa on November 15, stressing the need to promote ASEAN’s central role in managing disputes in the East Sea. 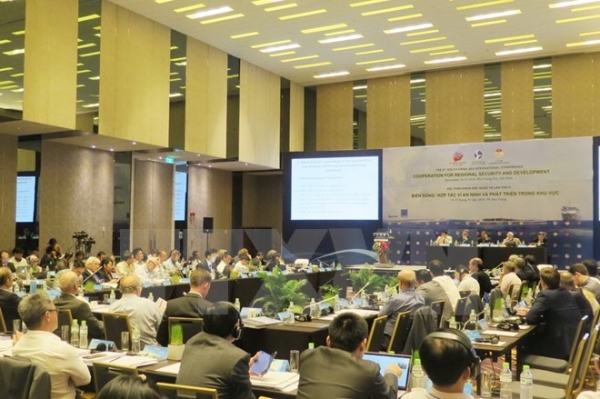 Through the course of seven sessions with 28 presentations and nearly 200 opinions, delegates joined heated discussions on regional and global context, recent happenings in the East Sea, legal, economic, political security and historic aspects in the East Sea dispute and prospects of dispute settlement and management in the region.

Commenting on the origin of the East Sea dispute, many participating scholars said it began decades ago, saying that the nine-dash line claimed by China is to initially define sovereignty over islands without resorting to any legal and scientific grounds.

About the recent developments in the East Sea, they shared view that China is likely to reach consensus with several Southeast Asian countries to soften disputes, but on field, it has still maintained, or even enhanced its presence and control in the area, including the Scarborough Shoal and Truong Sa (Spratly) archipelago.

The construction and installation of equipment for military purpose and surveillance in Da Chu Thap (Fiery Cross Reef), Vanh Khan (Mischief Reef) and Subi reef have not been slowed down, proving that China does not change its long-term goal of gaining full control over the East Sea, which is also an important cause of regional tension.

Underscoring ASEAN’s central role in managing East Sea dispute, they said countries are still concerned about China’s activities in the East Sea, given that the US’s Asia-Pacific-oriented policy under the new administration remains unclear.

On the political-economic aspects, scholars agreed that in order to ensure regional security and stability, parties concerned need to exercise self-restraint, maintain status quo, avoid unilateral actions in the East Sea such as militarising occupied areas and declaring the Air Defence Identification Zone.

They called for establishing mechanisms to manage conflicts in fishing, fuel production and marine environment protection.

Regarding the legal aspect, participants said the ruling by the Permanent Court of Arbitration acknowledges that developments in the East Sea over the past time run counter to the regulations of the 1982 United Nations Convention on the Law of the Sea.

According to them, conclusions of the ruling open up a chance for cooperation in fields of common interest such as fishing, maritime safety and environment protection.

Several opinions suggested developing mechanisms on bilateral or trilateral cooperation for parties in the East Sea, building a code of conduct for unplanned encounters at sea and coordinating in protecting the environment and fisheries resources.

In his closing speech, Director of the Diplomatic Academy of Vietnam Associate Professor Nguyen Vu Tung urged parties concerned to take constructive approaches, respect each other and abide by international law.

The conference took place in an open, straightforward and practical manner and showed a meaningful effort to contribute to promoting international cooperation for peace and stability in the East Sea, he said.