Ho Chi Minh's thought on People Public Security Forces - an important theoretical foundation of the cause of protecting security. During the life of his revolutionary activities, President Ho Chi Minh always paid attention, took special care of building, educating and training the People's Public Security Force (CAND) to grow up and grow in all aspects. 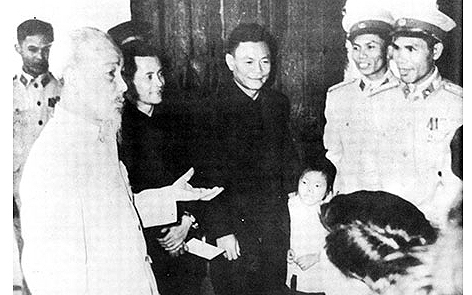 In particular, Ho Chi Minh's thought on the CAND has formed as an objective indispensable, an integral part of his ideological system, becoming an important theoretical foundation of the cause of protecting security and order, as well as building the People's  Public Security Force force  from its inception to the present.

According to Ho Chi Minh's thought, the People's  Public Security Force is deeply characterized by the nature of the working class, Party and people.

He asserted: "... our police are the people's police, for the people serve and rely on the people to work" (1). At the 10th National Security Conference, January 1956, he emphasized: “Our people have two forces. One is the army, to fight foreign invaders, to protect the Fatherland, to keep the peace. Another force is the police, to fight domestic enemies, against vandals. There are wartime and peacetime. The task of the army is to fight enemies at wartime and to train at peacetime. As for the police, they have to fight the enemy all the times,  there is a lot of works at the war and more works at peace. ”

(3). Therefore: " The responsibility of the police to the people, to the Party, and to the socialist revolution is very big and very heavy."

(4). Regarding the characteristics and nature of the police work, he affirmed: "The work of the police is quiet but very important"

(5), "For the police, to fight the outside enemy is very hard, it is even harder to fight the enemy inside themself."

6), "Must see that the greater work, the harder it is ... And to see the hardship is to overcome, not to back down"

(7). He always determined that the police must have dialectical thinking, violent methods, and technical measures, but first of all, they must have methods of working with people, building a close relationship with the people such as between flesh and blood. Police work must be deeply imbued and consistently carry out the viewpoint and motto "people are the roots": "How many officers and soldiers do the police have? Not so many! … The People` police must work with the people so they will have tens of millions of hands, tens of millions of eyes and ears! To do so, we must rely on the people, not remain aloof from the people. If we don`t, then we will fail. When people help us a lot, we will succeed a lot, if they help us a little, we will succeed less and if they help us completely, then we will win completely ”

(8). Every police officer and soldier must be the best, the most excellent cadre for mass mobilisation, in particular, must do a good job so the people would believe, love the police and would more and more voluntarily and effectively participate in the work of ensuring security and social order. In his speech at the Conference of Public Security Officers, April 29, 1963, he emphasized: "It is necessary to mobilize the masses to participate in the movement of protecting pubic order, to educate the masses to raise the spirit of being the master ò the country, the spirit of vigilance against the enemy of the people, actively preventing and fighting espionage commandos. To achieve that result, the police must wholeheartedly help the people and rely on the powerful forces of the people ...

If we do those things well, we will definitely win against the enemy ”.

President Ho Chi Minh paid special attention to building a strong CAND force politically, ideologically, organizationally, and ethically. He requested that the police organization apparatus must be built highly democratic, simple, practical, and effective. He is interested in building the police apparatus at the grassroots, border, and island areas. In His thought, a police officer is really the "root" of all jobs, scientifically and comprehensively mentioned from the concept, position, role, task, thought, human nature of cadres to the importance of cadre work, basic principles in recruiting, training, using, evaluating, inspecting, supervising police officers and emulating, commending and disciplining in the People's Public Security Forces.

He always emphasized the quality of loyalty to the Party, wholeheartedly serving the Fatherland, serving the people; at the same time, reminded police officers and soldiers to cultivate, train and deserve to be important and reliable armed forces to protect the Party, the State and the people. This is clearly, fully, comprehensively and deeply expressed in the letter to comrade Hoang Mai, Director of Department of Public Security of Region XII on 11 March 1948, in which he specified the Status of a revolutionary police officers. That has become a big idea, bringing a strategic direction in the work of building the Party, building a PPSF.

That is: “For myself, to be frugal and have integrity; For colleagues, to help with kindness; For the government, to be absolutely loyal; For the people, to be respectful and polite; For the work, to be devoted; For the enemy, to stand firmly against them.”

The all-encompassing view in Ho Chi Minh's thought is to build solidarity within the Party, domestic solidarity, and international solidarity, combining the strength of the nation with the power of the times. Therefore, President Ho Chi Minh attaches great importance to the relationship between the Party, the State and the People`s Public Security Force, the relationship and the synergies between the PPSF and the People's Army and other entities in the political system. These are very special relationships in order to promote the role of Party leadership, State management, people to inspect, supervise and mobilize synergy in the struggle for national liberation and reunification, in building and defending the Fatherland.

He pointed out: "Public security must be closely linked to the Party's political line. If we escape the political line of the Party, then no matter how smart we work, there is no good result”.

(10) "The Party must have the right political leadership, then the professional work will be right."

(11); "The party committees of all levels must really help and closely lead the police."

(13), contributing to strengthening the organization and improving the fighting strength of the PPSF. He affirmed that the relationship between the PPSF and the People's Army is a kind of combat cooperation, glue, sticking relationship for the common goal of protecting the Party, the State, the regime and the people: "Police and the Army is the two arms of the people, of the Party, of the Government, of the dictatorship of the proletariat. Therefore, there is a need to unite closely with each other, help each other, strive to develop advantages, overcome incorrect ideas ... "

14). 2. The Vietnamese People's Public Security Forces are extremely proud and grateful to the great President Ho Chi Minh, the glorious Communist Party of Vietnam for organizing, leading, educating and training so they can be the key people`s armed force, absolutely loyal and trustworthy of the Party, the State and the people; constantly striving and sacrificing for the independence and freedom of the Fatherland, for the national security, social order, and safety, the peaceful and happy life of the people; together with the entire Party, the entire people and our army make great victories in the cause of national liberation, national construction, defense and fulfillment of the noble international obligation.

In the context of the new situation, the People's Public Security Forces continue to research, study, grasp and develop the content, the meaning of revolution, science and the value of Ho Chi Minh's thought on the People's Public Security Forces, in order to perfect the theoretical basis of the PPSF and methods, measures and arts of woking. Constantly taking care of building a revolutionary, regular, highly-skilled, gradually modernised People's Public Security force; streamline organizational structure, effective and efficient operation, close coordination mechanism, efficient operation, improving the quality of interaction and serving the people. Continuing to well organize the work of grasping, analyzing and forecasting the situation, actively advising with the Party and State on undertakings and solutions to ensure security, order, socio-economic development and external relations; synchronously deploying professional measures, coordinating closely with the People's Army and branches and levels, relying on the people to well perform the task of protecting security and order, contributing to maintaining stability. socio-political regulations, firmly protecting independence, sovereignty, unity, territorial integrity, protecting national interests and security, effectively serving the cause of construction, protection, integration, and develop the country.

General, Professor, Dr. To Lam, Member of the Politburo, Secretary of the Central Police's Party Committee, Minister of Public Security.

(14) President Ho Chi Minh with the construction and defense of the Homeland, CAND Publishing House, p. 1404.