HCM CITY — HCM City plans to turn Cần Giờ District into an ecological urban area as part of efforts to urbanise it and improve the quality of life for locals.

With Prime Minister Nguyễn Xuân Phúc calling on HCM City to “urbanise the district while preserving its mangrove forests,” the city plans to solicit investment in the district, especially in major projects like the Cần Giờ Sea Encroachment project, Cần Giờ Bridge, an upgrade of the Rừng Sắc route, and building a ferry port.

They also aim to boost sustainable development of services, agriculture and the marine economy, protect the mangrove forests and build the district into an international entertainment and tourism area.Nguyễn Hữu Hiệp, chief of the HCM City Mass Mobilisation Commission, has urged the district to shift its economic structure from agriculture to services and trade, promote the marine economy and tourism, and make tourism a key industry.

The city also plans a number of major urbanisation projects in Cần Giờ.They include the 3.4km Cần Giờ Bridge on the Soài Rạp River between the district and the rest of the city.

A high-speed boat service will be operated between Bạch Đằng Wharf in the downtown area, the district and neighbouring Vũng Tàu City.A proposed helicopter charter service between downtown and Cần Giờ will cater to local and international tourists.A sea bridge between Cần Giờ and Vũng Tàu will also be built by 2025.

Nguyễn Thiện Nhân, secretary of the city Party Committee, said urbanised Cần Giờ would become a popular tourist destination for both local and international visitors. The district is expected to contribute to the city’s economy by creating more jobs and bringing large sums of revenues, he said.

Cần Giờ’s tourism development has been relatively slow since it can only be reached by ferry, but the construction of the huge bridge linking it with the rest of the city will make it easier to reach.The district has recently seen a 50 per cent average increase in the number of visitors per year. 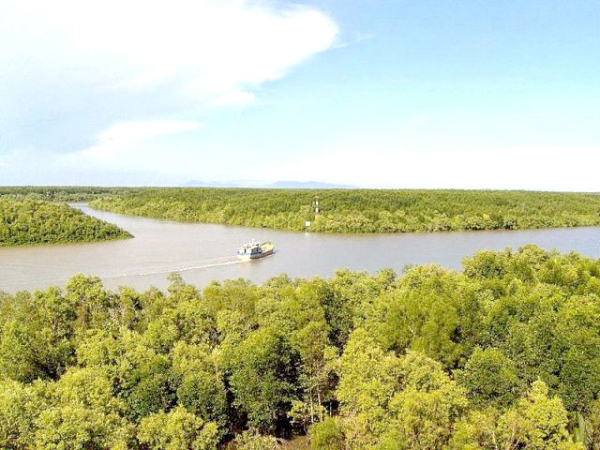 The PM has approved the US$9.3 billion Cần Giờ Sea Encroachment Project, which is expected to help create 25,000 jobs and bring significant revenues for the city.It will be developed in the coastal Long Hòa Commune and Cần Thạnh Town on an area of 2,870ha by the Cần Giờ Tourism Urban Area Joint Stock Company.

It will be situated some 18km from the famous Cần Giờ Mangrove Biosphere Reserve, close to the Xoài Rạp and Lòng Tàu rivers, 17km from the Vàm Sát Eco-Tourism Area, and 4km from Monkey Island.

When completed, it would contribute VNĐ2.9 trillion ($124.36 million) a year to the city’s coffers.Environmentalists have, however, warned that the urbanisation of Cần Giờ should be considered carefully since it is vulnerable to the impacts of rising sea levels, erosion and subsidence.

They also point out that the UNESCO-listed Cần Giờ Mangrove Biosphere Reserve is a crucial buffer against coastal erosion and storm-induced coastal flooding, and thus should be spared development.Architect Ngô Viết Nam Sơn also stressed the importance of preserving nature in the area, especially the mangrove bio-sphere.

However, Nguyễn Xuân Hải, director of the Ministry of Natiornal Resources and Environment’s environmental impact assessment department, said: “The project is in compliance with Vietnamese laws and UNESCO’s legal framework.”

The investor needs to do further studies on the risks caused by extreme weather and erosion in forest lands to ensure the ecological integrity of the mangrove forests during the long period of construction, he added.

Dr Nguyễn Chí Thành, director of the Việt Nam Forest and Wetland Research Institute, said the developer must ensure there is “no negative impact on the reserve’s environment and bio-diversity.”

Cần Giờ is also well-known for its annual Nghinh Ông (Whale Worshiping) Festival recognised as a National Intangible Cultural Heritage by the Ministry of Culture, Sports and Tourism.

Studies have shown that the Cần Giờ mangroves help filter grey water from upstream and regulate flood flows. One of the world’s largest rehabilitated mangrove forests also serves as a green lung and a bulwark shielding the city from storms and extreme weather.