China’s deployment of weapons and fighter aircraft to Hoang Sa not only is a violation of Vietnam’s sovereignty but also further exacerbates the situation in the East Sea.

Foreign Ministry spokesperson Le Thi Thu Hang made the statement at a regular press briefing in Hanoi on August 20 in reply to media questions on Vietnam’s stance regarding China deploying an H-6J bomber to Phu Lam Island in the Hoang Sa archipelago in early August.
Vietnam has affirmed many times and reiterated that the Hoang Sa (Spratly) and Truong Sa (Paracel) archipelagos are inseparable parts of its territory, the official said, adding that the country has sufficient legal basis and historical evidence testifying its sovereignty over Hoang Sa and Truong Sa in line with international law.“We call on parties to make responsible contributions to maintaining peace, stability, and security in the East Sea,” she said. 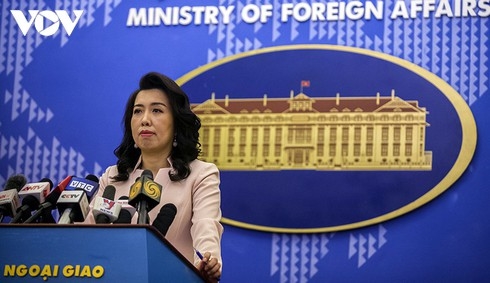 Concerning information that thousands of Chinese fishing vessels could flock to the East Sea after China’s fishing ban expires, Hang said Vietnam’s stance on the so-called fishing ban has been clearly stated.

On May 8, the spokesperson said in reply to questions about China’s fishing ban in the East Sea from May 1 to August 16 that as a coastal country in the East Sea and a member of the 1982 UN Convention on the Law of the Sea (UNCLOS), Vietnam has sovereignty, sovereign rights, and jurisdiction in waters as defined in the convention, and enjoys other legitimate rights in waters in line with the convention.