A grand ceremony was held in Hanoi on October 29 to mark the 70th anniversary of the traditional day of Vietnamese voluntary soldiers and experts in Laos (October 30). 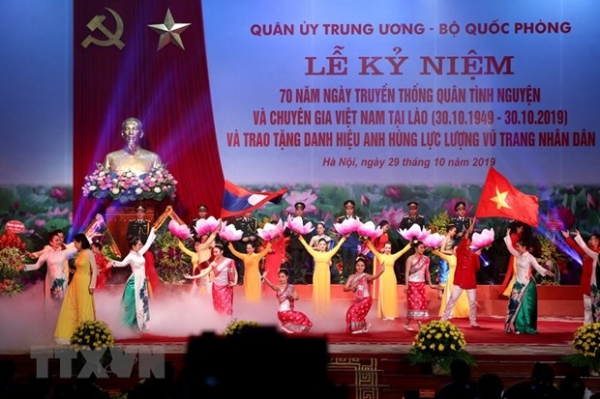 At the event (Photo: VNA)
Prominent at the event were former and incumbent leaders of the Party, State and Fatherland Front, veteran revolutionaries, heroes of people’s armed forces, former Vietnamese voluntary soldiers and experts in Laos, and young people from the two countries.
Lao Party General Secretary and President Bounnhang Vorachith was also present at the ceremony.
Addressing the event, Minister of National Defence Gen. Ngo Xuan Lich said in October 1945, the governments of Vietnam and Laos signed a mutual assistance treaty and an agreement on the organisation of the coalition army.
From 1945 to 1947, the Vietnamese Party Central Committee and government decided to develop overseas Vietnamese liberation troops in Laos.
On October 30, 1949, the standing board of the Indochinese Communist Party Central Committee decided that the Vietnamese armed forces in Laos will be organised as voluntary soldiers.
Together with the Lao army, they launched a number of campaigns and attacks against French colonialists and American imperialists, with the legendary Truong Son – Ho Chi Minh Trail becoming a symbol of Vietnam – Laos special solidarity and combatant alliance during the fight against the US.
From 1973 – 1975, part of the Vietnamese voluntary soldiers stayed in Laos to help protect liberated areas, towards the national liberation and the establishment of the Lao People’s Democratic Republic in late 1975.
In his speech, Lich asked the two countries to continue fostering the special solidarity and comprehensive cooperation across politics, socio-economy-culture, and national defence-security, with the defence relationship becoming one of the pillars in the Vietnam – Laos special ties.
Both nations were urged to build their people’s revolutionary, elite and modern armies as well as enhance joint work across Party and political work, and personnel training.
They need to continue working closely together to build and protect a borderline of peace, friendship, stability and prosperity; hold border exchanges to share experience and raise mutual understanding, deal with disaster consequences and fight crimes in border areas, the minister said.
He suggested jointly searching and collecting remains of Vietnamese voluntary soldiers and experts who laid down their lives in Laos.
At the event, Lao Defence Minister Gen. Chansamon Chanyalat affirmed that the Lao Party, State and people will continue upholding special relationship with their Vietnamese counterparts.
Deputy head of the liaison unit of Vietnamese volunteers and military experts in Laos, Lt. Gen. Nguyen Quoc Thuoc pledged to uphold the tradition of Vietnamese voluntary soldiers and experts and serve as a bridge to lift great friendship, special solidarity and comprehensive partnership between Vietnam and Laos to a greater height, for the sake of peace, stability and prosperity in the two countries, in the region and the world.
On the occasion, National Assembly Chairwoman Nguyen Thi Kim Ngan presented the title of Hero of the People’s Armed Forces to Vietnamese voluntary soldiers and experts in recognition of their dedications to the Lao revolution during the anti-US war.
Party General Secretary and President of Laos Bounnhang Vorachith also presented a photo “Vietnamese voluntary soldiers bid farewell to Lao friends before returning home” to the liaison unit./.
(Vietnamplus)
Tweet