The memoirs of a former Vietnamese ambassador in France and images of Paris during Việt Nam’s struggle for the unification of the country in 1975 will be featured in a book recently released by Thế Giới (World) Publishing House. 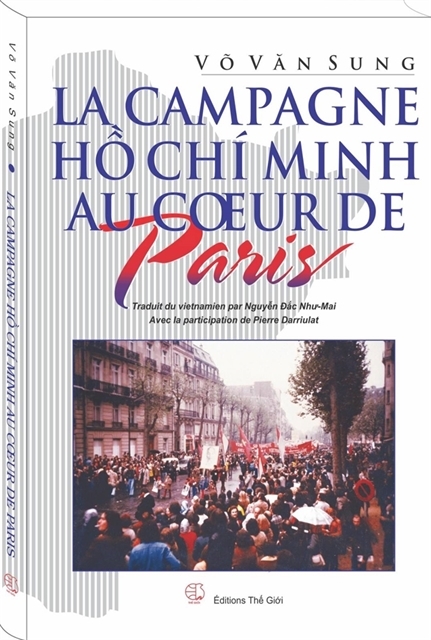 The book, which has been translated into French under the title La Campagne Hồ Chí Minh au cœur de Paris (The Hồ Chí Minh Campaign in the Heart of Paris) by translator Nguyễn Đắc Như Mai, is part of the celebration of the 45th anniversary of Việt Nam’s independence and national reunification.

Its content is based on the original text of the memoir first released by Vietnamese Ambassador Võ Văn Sung in France. First published in Vietnamese in 2005 on the occasion of the 30th anniversary of the Hồ Chí Minh Campaign to totally liberate the south of Việt Nam, paving the way for the country’s independence and unity after 20 years of being separated, the book instantly became a hit with readers.

Its author – the veteran diplomat Võ Văn Sung (1928-2018) – is a former member of Việt Nam’s delegates in the secret negotiation between general Lê Đức Thọ and American politician Henry Kissinger, which resulted in the Paris Peace Accords. He is also the first ambassador of the Democratic Republic of Việt Nam in France at that time.

Not only a witness to history and one of the leading Vietnamese experts knowledgeable in modern Việt Nam-France relations, Sung is also a key figure contributing to cause the wave from April to May 1975 in Paris and across Europe in responding to the Hồ Chí Minh Campaign and congratulating Việt Nam for the country’s victory.

La Campagne Hồ Chí Minh au cœur de Paris is considered a tribute to French friends for their perseverance and enthusiasm in supporting the struggle of the Vietnamese people.

The book is also especially grateful to international friends for their perseverance and enthusiasm in supporting the struggle of the Vietnamese people. Among them are the French Communist Party as the loyal friend of Nguyễn Ái Quốc-Hồ Chí Minh; French friends of various backgrounds, political views, and politicians following French General De Gaulle's policy of opposing the American war in Indochina as well as many international friends in Western Europe and America who have been wholeheartedly and silently supporting Việt Nam in the special historic turning point.

With a condensed and straightforward writing style, the memoir is not only a rare historical document about Vietnamese people, the movements of overseas Vietnamese in France and international friends after the signing of the Paris Peace Accords from 1973 to 1975 but also the record of the feelings of overseas Vietnamese people and the sincere friendship between international friends and Việt Nam.

The memoirs were first published by the Quân đội Nhân Dân (People's Army) Publishing House in 2005 in commemorating the 30th anniversary of Hồ Chí Minh Campaign's victory, and then reprinted twice in 2012 and 2015. — VNS

According to the former ambassador, he named the book as a military campaign as a tribute to the creative, vibrant and responsible activities of Vietnamese diplomatic representatives and of the overseas Vietnamese in France that have significantly contributed to the independence and unity of the nation. He called it the diplomatic front, which coordinated with the political and military fronts in Việt Nam to become the three factors constituting the righteous power of Việt Nam’s resistance.