The South China Sea has a nationalist and identity value above and beyond material resources. 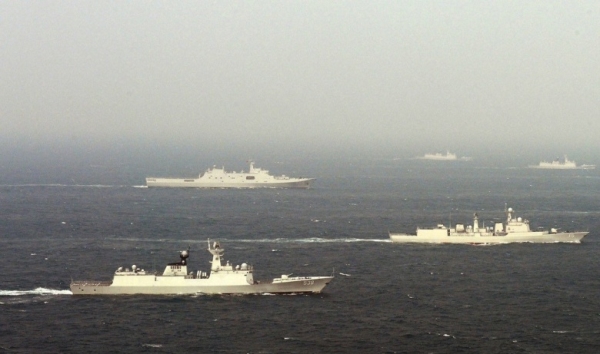 The complex disputes over islands, rocks and reefs in the South China Sea involve six countries: China, Taiwan, Vietnam, the Philippines, Malaysia and Brunei. They have a long history, with their origins in the interruption of traditional practices by European and Japanese colonialism, and compounded by the post-WWII conflicts in Southeast Asia. These disputes are among the most vexing issues in the region.

Despite this backstory the tensions associated with contestation have waxed and waned. The current spike in geopolitical temperature dates back to 2009, and in particular to China’s issuing of the decidedly ambiguous “dashed line” map. This map can now be found in passports, on inflight magazines and in every school book in the country. Since then, China has begun to take steps to defend what it portrays as its rights in the sea. Disputed features have been built upon and now boast 3 km runways and deep water ports. Sansha island in the Paracels, population 1200, has city status. And while Beijing is not the only country occupying or building on disputed features, its activities are the most widespread and destabilizing.

Yet in spite of its many activities, it is not clear precisely what it is that China wants. We can see plainly its methods of advancing its interests on a daily basis, but just what its larger strategic objective may be is uncertain. This is perhaps most obvious in the case of the dashed line map - it was presented accompanying a note in which China asserted its “indisputable” sovereignty over the islands and the adjacent waters of the Sea. But it lacked specificity about what the dashes meant, where, precisely on the map the lines are located or indeed what meaning they held.

This ambiguity is, in part, deliberate. It provides diplomatic leeway to manage events; it sows confusion in the minds of those who have a stake (however large or small) in the dispute; and, of course, it papers over the fact that Beijing may not be entirely set in its own mind as to what it wants to achieve. But this lack of clarity makes managing the dispute extremely difficult and the process of negotiating some kind of settlement acceptable to all virtually impossible.

There are ultimately three main things that China appears to seek. First, as with all the claimant states, China is a net energy importer. The Sea is thought to be rich in oil and gas, and China wants not only the economic benefit that comes from having sovereign rights over hydrocarbon reserves but also the security of supply that it would entail. Equally, the South China Sea is a significant fishery and as a country which consumes growing volumes of protein this is highly prized.

China also desires security for its maritime approaches. The country is dependent for its economic prosperity on trade flows – energy and commodities inbound and finished goods going to market. But this goes beyond protecting shipping lanes; in the nineteenth century China was brought low by foreign forces that tore the country apart and humiliated its people, at least so goes the Party’s nationalist mythology. The Party’s claim to legitimacy depends on its ability to protect China and it follows from this that it must secure the means through which others approach China. The South China Sea is, in many respects, the country’s front door and it does not want that door to be vulnerable.

Finally and perhaps most crucially the Sea is now presented by the Party-State as a fundamental part of China. It has long argued that China was once a great nation and that only through the tenacity and discipline of the Communists was it able to be made whole and once again sit at the top table in world affairs. The South China Sea thus has a nationalist and identity value above and beyond material resources and questions of strategy, and this value should not be understated given the importance of this matter to the Party’s legitimacy and sense of itself.

The problem is that these three goals make devising a negotiated settlement that involves anything but a maximalist vision of China’s claims over the sea extraordinarily difficult. More significantly, its vision is incompatible with the view that the United States and its allies have for Asia’s future. And it is for this reason that the South China Sea has become such a significant part of the region’s international politics and why the United States and its allies find managing the dispute so vexing.