24/03/2020 16:00:00
1. Fundraising campaign calling for public support to Covid-19 fighting
The Presidium of Vietnam Fatherland Front Central Committee launched a campaign on March 17 in Hanoi to call for public support to the Covid-19 prevention and control efforts as well as to the people suffering drought and salinization. The ceremony was broadcast live on TV to all the 63 cities and provinces with the participation of Prime Minister Nguyen Xuan Phuc. 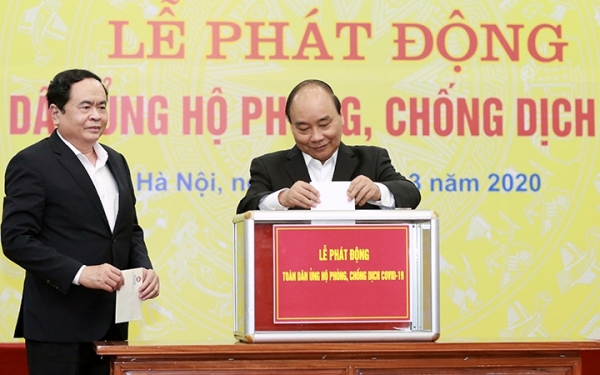 PM Nguyen Xuan Phuc supports Covid-19 fighting. Photo: TRAN HAI
The campaign with the aim of raising funds to help the country overcome difficulties in the fight against Covid-19, especially to support medical workers, who are directly involved in treatment or work in quarantine areas and individuals or families affected by Covid-19.
The money pooled by the program will be used to buy medical equipment, necessities to support Covid-19 patients and people undergoing quarantine. While those being suffered by drought and salinization will be provided with water keeping tanks, cleaning water, fertilizer for cultivation.
The campaign is taking place from March 17 to April 30, 2020 while the disbursement will be end by May 20. At the launching ceremony, the funds have raised more than 230 billion VND of donations from businesses and banks. PM Phuc called upon every citizen, especially businesspeople and oversea Vietnamese, to strengthen solidarity and make greater contributions to help the country overcome difficulties in the fight against the Covid-19 pandemic.
The leader firmly believed that Vietnam will do well in the fight by applying all measures and initiatives to protect the public health and soon bring people’s life back to normal, as well as strive to realize the national socio-economic development targets.
2. CPTPP contributes actively to trade activities of Vietnam
Report of the Central Institutes of Economic Management (CIEM) states that in 2019, Vietnam’s export turnovers to 6 members ratified CPTTP are 34.4 billion USD, increased by 8.3% and the import turnovers are 30.1 billion USD, increased by only 1%. Before CPTPP implementation, the export ratio of Vietnam to CPTPP signatories occupied nearly 30.2% in 2007-2008, then gradually reduced to 23% in 2009-2010 and 18% in 2011-2018, respectively.
FDI of Vietnam in 2010-2019 period increased at the average of 12.4% per year in term of project numbers, 5.5% in registered capital and 7.4% in implemented capital. The scale of implemented FDI made records constantly with the most impressive amount if 20.4 billion USD in 2019. Trust of the foreign investors has been consolidated in the stable macroeconomic context, improving investment environment, transparent business policies and comprehensive FDI attraction strategies.
Positive impacts when EVFTA takes effect
Big opportunities brought about by CPTPP to Vietnamese enterprises are various from market expansion, export increase, investment capital attraction to high-tech application. However, businesses need to solve effectively challenges, especially improving competitiveness, harmonizing the CPTPP implementation with other integration agreements.
According to Ms. Nguyen Thi Thu Trang, Director of WTO and Integration Center under VCCI, the biggest opportunity of CPTPP is the pressure on mechanism reform. 7 among total 10 signatories of CPTPP had signed and implemented FTA with Vietnam for years, so the main economic benefits come from the rest 3 members. However, impacts on mechanism reform are significant to Vietnam because of high commitment in CPTPP, expressed Ms. Trang. Direct economic opportunities from CPTPP may not high but if combine with benefits from EVFTA, they will create momentum for Vietnam to reform mechanism.
3. PM orders food security to ease the emotion of the people
Prime Minister Nguyen Xuan Phuc on March 18 ordered authorities and localities nationwide to ensure food security at a national teleconference in Hanoi to review the 10 years of the implementation of the project on national food security through 2020. 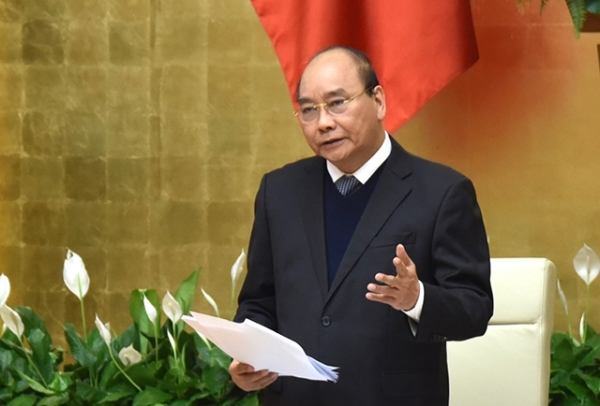 Photo: TRAN HAI
He stressed the need to ensure the storage of food in all conditions, adding that food security is always and forever an extremely important issue for all countries, especially in the cases of political instability, non-traditional security, and epidemic. Vietnam has basically met the need for food of the people, the demand for export and for coping with natural disasters, the PM said.
Vietnam proud to have one of the most longevity in Asia; concentrates to restructure agriculture, promotes advantages in agriculture with strong growth in agricultural production development and rice export increase stably. However, the leader also pointed out limitations in the linkage of chain productions associated with production areas, processing and market coordination, saying that Vietnam still faces difficulties in processing agricultural products and forming concentrated production areas.
At the conference, PM Phuc expressed important targets of fulfilling the nutrition needs, building proper and scientific food structure in both quality and quantity to meet the demand of the population of 104 million people in 2030. He asked for attention to strengthening storage, and promoting agricultural development in parallel with restructuring the economy and the agricultural sector, towards improving production capacity and realizing export growth goal of between 9 -10 percent.
The Government will propose the Politburo to keep more than 3.5 million ha of land for paddy cultivation to ensure the food security of 22 million tons of rice for domestic consumption and exports, said the PM. The area of paddy fields nationwide in 2018 reached over 4,159 million ha, 3.76 ha higher than the set target; the rice production in 2019 reached 43.4 million tons, up 41-43 million tons over the set plan; and rice exports amounted to 6.34 million tons in 2029, exceeding the set target of 4 million tons. The export turnover of forestry now is 12 billion USD and sets target of 20 billion USD in 2025-2030 period.
The PM also urged increasing investment for the agricultural sector with the involvement of the State, businesses and farmers. He assigned the Ministry of Agriculture and Rural Development and the Government Office to build a new Government resolution on promoting agricultural development and ensure food security in the new context.
4. Covid-19 Pandemic has little impact on Vietnam’s shrimp exports
The domestic shrimp industry has not faced a great impact from Covid-19 pandemic as the peak season for shrimp exports is still months ahead. Enterprises in this industry is under production, improving competitiveness to take new opportunities and to overcome the pandemic in the coming time. 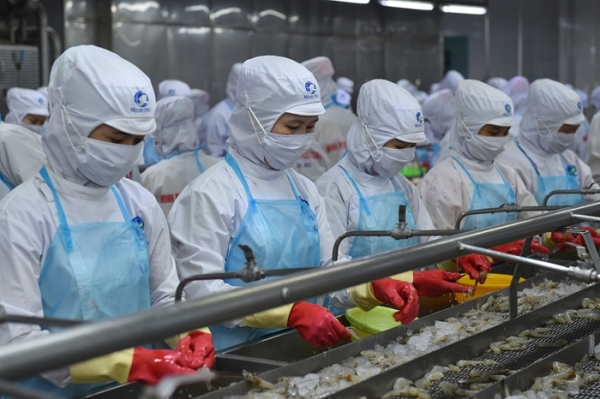 Shrimp exports waiting for new opportunities in 2020.
Concentrating on large markets
The consumption patterns in Europe would be changing due to the epidemic, particularly, the demand to import convenient canned and frozen seafood would pick up as it is easier for processing than fresh products, according to Mr. Ho Quoc Luc, Chairman of Management Board and General Director of the Sao Ta Food Joint Stock Company. He said that the company sold 937 tons of shrimp products last month, generating $10.7 million in export value. In 2020, Sao Ta strives to keep stable at the 3 major markets including Europe, Japan, US and its long-term sustainable customer system, Luc shared.
The Covid-19 outbreak in China and South Korea has led major shrimp importers to curtail export volumes from these two countries, and local shrimp exporters need to avail themselves of the opportunity to scale up exports to these markets.
According to the Vietnam Association of Seafood Exporters and Producers (VASEP), the shrimp harvesting season of Vietnam is April and May but not in the first quarter. And many large markets have reduced shrimp imports from China due to the Covid-19 outbreak in this country. That has brought an opportunity for Vietnamese shrimp enterprises to increase their exports to those markets.
The reduction of anti-dumping tariffs in the US market to zero would promote growth in Vietnamese shrimp exports to this market. Now, the US is the second largest export market of Vietnamese shrimp, accounting for 19.4 per cent of total export value.
The EU is Vietnam's largest shrimp export market, accounting for 20.5 per cent of the total shrimp export value, the association said. According to the EU-Vietnam Free Trade Agreement (EVFTA), the tariffs of most raw shrimp, including fresh, frozen and chilled products, imported from Vietnam into the EU will be reduced from the basic rate of 12-20 per cent to zero as soon as the agreement comes into effect, expected this year. Meanwhile, import tariffs on processed shrimp will fall to zero after seven years.
Improving competitiveness
Analysis of the Export & Import Department under Ministry of Trade specifies that with the current difficulties due to the pandemic, especially in China, shrimp production, processing and export enterprises have changed their business plans to expand export markets. Now, the local businesses focus on improving their competitiveness and producing shrimp for export after the pandemic.
In the long haul, exports to the EU will also benefit from EVFTA. However, once the tariff barrier was removed, EU started to apply non-tariff regulations on ethoxyquin chemical forbidden. Accordingly, from March 31, 2020, ethoxyquin will not be allowed in seafood preservation.
As Vietnam’s largest shrimp breeding company, Viet-Australia Seafood Corporation is deploying a policy on support shrimp larvae to help farmers during the Covid-19 time. At the same time, the farmers should produce clean shrimp and ensure traceability for their product to enjoy preferential tariffs under the EVFTA and increase exports to Europe.Vietnam expected to earn 10 billion USD from seafood exports, including 4 - 4.2 billion USD of shrimp exports in 2020.
Vietnam.vn (Review)
Tweet