Following are the main events of the week: 90th Founding Anniversary of Communist Party of Vietnam;Government standing board holds working session on coronavirus control;23 industries to be suffered by Coronavirus epidemic;Ministries meet for rescue agricultural products export to China

General Secretary of the CPV Central Committee and State President Nguyen Phu Trong made a statement at the ceremony marking the CPV’s 90th founding anniversary in Hanoi on February 3rd (1930-2020). The ceremony also saw the attendance of Prime Minister Nguyen Xuan Phuc, National Assembly Chairwoman Nguyen Thi Kim Ngan, and many other incumbent and former leaders of the Party, State and Vietnam Fatherland Front, veteran revolutionaries, the Peoples of Capital city of Hanoi and International Friends. 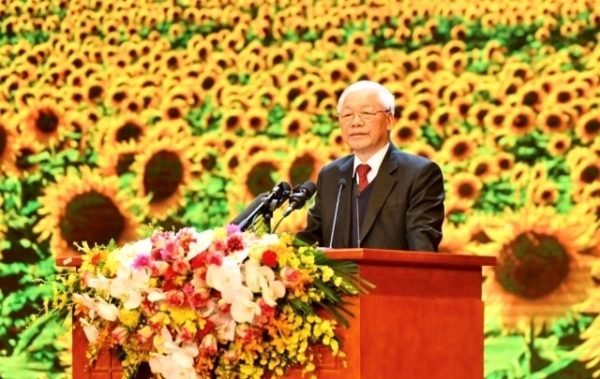 In his speech, the top leader reviewed the process of establishment, training, devotion and development of the CPV and highlighted the historical significance of the CPV’s 90 years since its foundation. Mentioning the achievements Vietnam has gained during nearly 35 years of reform, the leader said Vietnam has emerged as a developing country with middle-income, while its politics and society have been stabilized, national defense-security, independence and sovereignty have been firmly maintained, and position and prestige on the international arena have been enhanced.

It is a must to build a pure and strong Party in terms of politics, ideology, morality, apparatus and personnel, revamp leadership methods, strengthen the close-knit relations between the Party and people, prevent and push back degradation, and enhance the Party leadership and combat capacity, considering this a vital task of the Party and regime, he said.

He emphasized the need to carry forward beautiful traditions, maintain and spur the Party’s revolutionary nature and its pioneer role over the last 90 years in the Party building and rectification work to meet the expectation of the Peoples. He also called for greater efforts to firmly maintain national independence and sovereignty, keep a peaceful and stable environment to serve national development and promote external relations.

The top leader also pointed out major tasks in 2020 – the final year of the 12th National Party Congress; due attention must be paid to the successful organization of Party congresses at all levels, towards the 13th National Party Congress; the country has to date joined most of international organizations and become an active and responsible member of the international community, he stressed, noting the ASEAN’s Presidency year of Vietnam and the second time as a non-permanent member of the United Nations Security Council.

On behalf of Party members nationwide, 87-year-old Ha Ky who has 70-year Party membership expressed his pride and deep sentiments to the glorious Party and beloved President Ho Chi Minh.

Young Party member Nguyen Thuy Linh, a student of the University of Languages and International Studies under the Vietnam National University-Hanoi, affirmed the resolve of the Vietnamese youth to uphold the tradition of older generations, study and work harder to contribute to the nation’s development.

An art performance show with special works together with invaluable documentary films on the development of CPV were displayed at the Ceremony.

Prime Minister Nguyen Xuan Phuc chaired a working session between the government’s standing board and leaders of relevant ministries on the result of the acute respiratory disease caused by the novel coronavirus (nCoV) prevention and control at the Government Office in Hanoi on February 4th.

The meeting is organized in the context of the outbreak of nCoV epidemic in man countries, including Viet Nam. Speaking at the meeting, the PM said while industry-trade and agriculture sectors have resumed operation after Tet Holiday, some activities such as aviation, stock transaction, tourism and export have been impacted due to the threat posed by the virus. 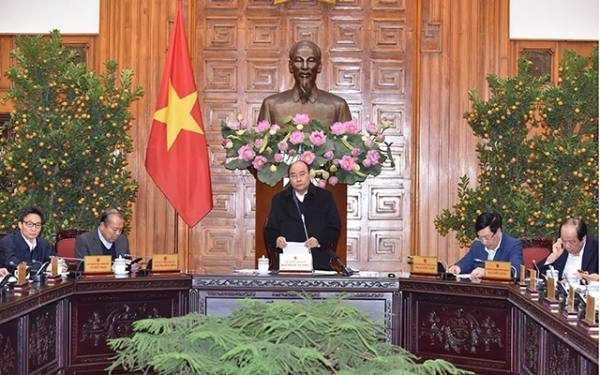 It is forecast that this week and the next week will be the peak time of the disease with higher risk of spreading and increasing number of fatality, requesting further synchronous and drastic measures from the Government, ministries and branches, the PM stressed.

He told ministries and localities not to be pessimistic to avoid causing panic among the public. The government leader required that all sectors and localities continue dealing with the disease, accepting the sacrifice of some economic interests to protect the health of people.

PM Phuc tasked the Ministry of Health to build scenarios to cope with the disease without causing excess anxiety among the public, while the Ministry of Science and Technology focus on studying the production of drugs and vaccines against the virus.

The Ministry of Culture, Sports and Tourism must be stricter in managing festivals, he said. The Finance Ministry was told to prepare sufficient funding for epidemic prevention and control. PM Phuc also recommended limiting the organization of meetings and conferences with large numbers of participants to reduce risks of virus spreading.

23 industries to be suffered by Coronavirus epidemic

Leading stock brokerage SSI Securities Corporation (SSI) has just reported the impacts of the acute respiratory disease caused by the new coronavirus 2019-nCoV outbreak to 23 industries in the stock market of Vietnam. Among them, 4 sectors are forecast to take advantage, 10 keep stable while 9 of them could be negatively impacted on short term. 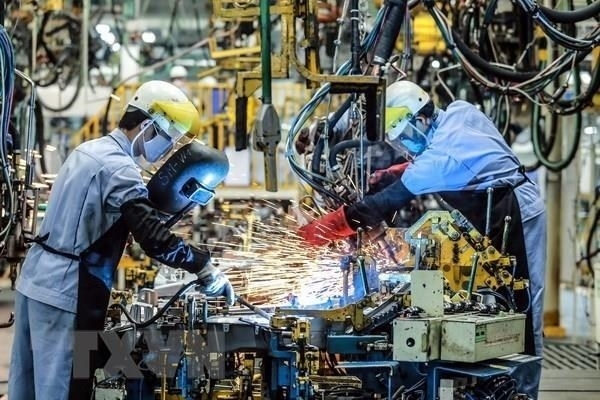 However, analysts of SSI considered it’s still so early to make any concrete assessment on market movement as well as the business results and profits of the public companies.

9 sectors to be impacted negatively

The 4 potential ones forecast to be pharmaceuticals, IT, electricity and clean water industries while the stocks most expected by the market are of pharmacy companies. However, SSI experts analyzed that this is a short-term trend and could not be a significant change on basic factor to the listed pharmacy companies in the context of nCoV spreading.

The analysists forecasted the automobile could not be impacted by nCoV epidemic, thus they kept positive viewpoints on the industry and expected the growth rate of about 10%-11% of cars to be sold in 2020.

The commercial real estate, industrial park and related industries are also considered not to be touched by nCoV. While banking sector could be suffered in short-term by the epidemic but the experts still kept optimistic forecast on it in 2020.

Regarding to the insurance sector, nCoV spreading in Vietnam would make the insurance compensation amount increase very modestly because most of the health cost to be paid by the social insurance.

At the same time, the enterprises in dairy field could not be suffered by nCoV, even though, the sector is potential to develop for milk is considered to provide protein and convenient for consuming in the epidemic time.

And, finally is the fertilizer sector which could take the advantage of oil price reduce and could save cost for input. However, in case Vietnam restricts border trading, the agricultural products exports of Vietnam to China as well as fertilizer consuming could decrease.

Minister of Agriculture and Rural Development Nguyen Xuan Cuong and Minister of Industry and Trade Tran Tuan Anh co-chaired a conference in Hanoi on February 3 afternoon with relevant sectors and 6 provinces neighboring to China to seek ways to promote the trade and production of farm produce, given the complicated development of the acute respiratory disease caused by the novel coronavirus (nCoV).

As the Chinese government has taken drastic measures to control and prevent the coronavirus from spreading, China officials decided to extend the Tet Lunar New Year Holiday to the end of February 2nd. However, many Chinese enterprises and agricultural product trading centers in Guangxi province of China to shutdown until end of February 8th. 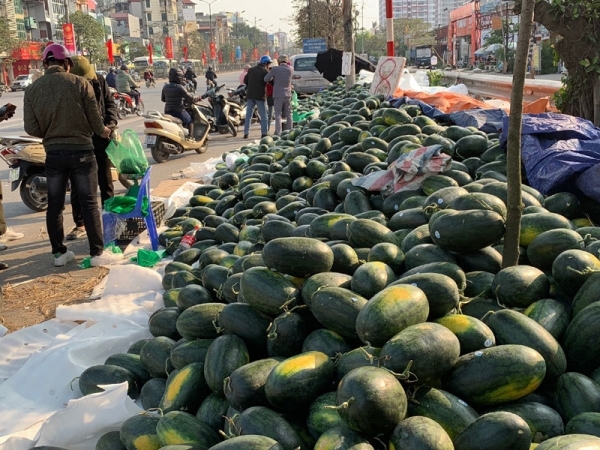 According to Mr. Nguyen Quoc Toan from The Department of Farm Produce Processing and Market Development of Agricultural Ministry, some Chinese enterprises importing agricultural products from Vietnam to supply to Wuhan city must cancel order as the impact of the nCoV disease spread. The consumption of Vietnam’s agricultural products faces serious difficulties with high risk of congestion at the border gates.The nCoV outbreak has been hurting all economic industries, especially agriculture, because China is a major market of Vietnamese farm produce. The sharp reduce in consuming demand on foods, agricultural products and trading activities of China will negatively impact the Vietnam-China trade of agro-forestry-fishery products, said the officials at the meeting.

To deal with the situation, the Ministry of Agriculture has requested localities to review the harvesting time, production, categories of the regions planting fruits to mainly export to China market in order to actively find out solutions for the product consumption soon.

In addition, the ministries encouraged farmers, local firms, cooperatives doing business with and exporting products to China to have firm contracts, stick with the development of the Vietnamese economy to increase competitiveness, quality and productivity to avoid the risks.

At the Cabinet meeting, the Government members updated the impacts of novel coronavirus (nCoV) epidemic to sectors, provided scenarios and figured out measures to enhance economic development to comprehensively complete the socio-economic development plan for 2020 under the chair of Prime Minister Nguyen Xuan Phuc.

According to the ministries, the direct impacts of the nCoV epidemic will make the export turnover drop sharply, especially exports of agricultural products, aquatic products, textiles, phones of all kinds and components; number of foreign tourists sharply decrease, including Chinese tourists who were not granted visas to Vietnam during the epidemic period; transport activities, especially in the aviation sector are also heavily affected. Besides, the disease also indirectly affects the fields of agriculture, industry and investment, especially the group of fruits and vegetables, agricultural products, and aquatic products, which have large export turnover to the Chinese market. In addition, it also affects the state budget collection, stock market, labor, employment, daily lives and psychology of the people. 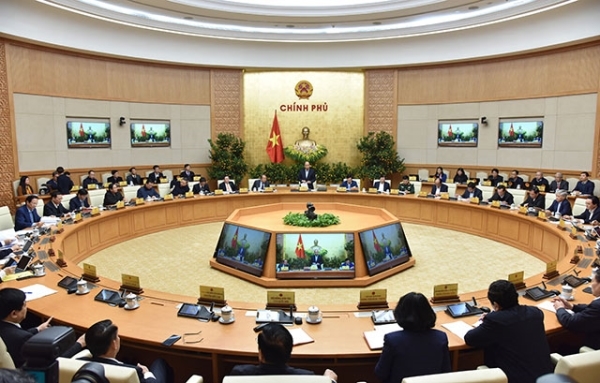 The Ministry of Industry and Trade considered that the extent of nCoV epidemic suffering the economy of Vietnam depends on the duration. On the short term, its impacts on some aspects of the economy is quite fast but only temporary. However, if the disease is not controlled soon and lasts until the second quarter of 2020, the impact on Vietnam's economy will be serious.

It is forecast that the nCoV epidemic will have negative impacts on the trade of agriculture, forestry and fishery products between China and Vietnam, the Ministry of Agriculture and Rural Development noted for key fruit products, especially dragon fruit, watermelon exporting in big volume to the Chinese market during and after Tet holidays.

As the outbreak may linger on, the PM ordered authorities to actively and proactively address it on all fronts, from health care to diplomacy, national defense-security, and socio-economy. PM affirms that the government advocates giving up several economic interests to protect health and lives of the people. In the spirit of fighting the disease like “fighting an enemy”, the entire political system must involve in the effort to raise public awareness on preventing the spread of the outbreak and to avoid over-worries of the public, he said.

Regarding to the socio-economic development, he asked the nationwide administrative system, from the central to local levels, to fulfill assigned tasks this year. The Government determines not to revise the growth rate target and others including exports, inflation, microeconomic stability.