The Central Steering Committee of anti-corruption combat hold its 17th session in Hanoi on January 15, 2020 chaired by General Secretary and President Nguyen Phu Trong, the Chief of the Committee. 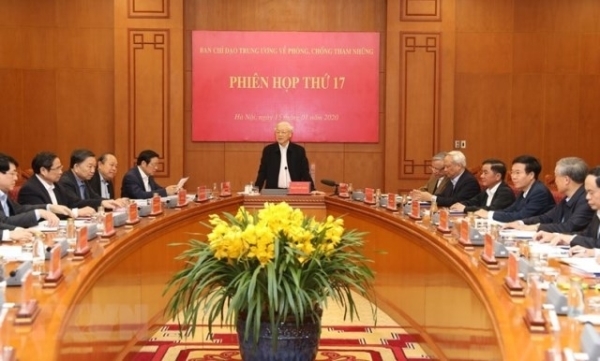 Speaking at the session, the General Secretary and President having looked back 2019, the anti-corruption combat has made certain encouraging progress, with a lot of policies having breakthroughs in an intensive manner, recording comprehensive, synchronous and important achievements, resulting in checking corruption and making important contributions to maintaining political stability, social – economic development and improving he country’s position and prestige in the international arena.

The General Secretary and President laid stress on the better investigation and handling of the corruption cases in an ever more intensive and effective manner. In 2019, the Steering Committee instructed and handled 67 cases and prosecuted 108 accused persons.

He attached a great importance to the information and propaganda work that has helped denounce the corruption case in time with a lot of articles and analysis, thus making a contribution to consolidating the people’s confidence in the Party and State.

He then mentioned the 2020 tasks, mainly focusing on building and perfecting the institution on social and economic management and anti-corruption combat; on the investigation and audit, particularly the review of the responsibilities of the chiefs of the Party Committees, organizations and administration at different levels. On the other hand, it is necessary to accelerate to settle all the corruption cases in time.

In the end of the session, the Steering Committee unanimously agreed to handle 6 cases in accordance with the law./.

The Bac Giang – Lang Son Highway officially opened to traffic on January 15, 2020 and worthy of note is that no tolls are to be collected during the Tet Holidays. 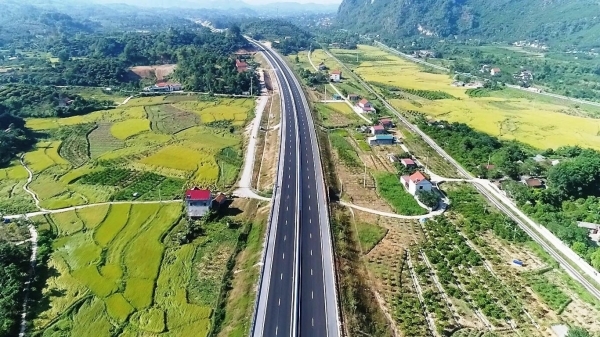 That the Bac Giang – Lang Son Highway is put into official operation helps relieve the traffic jam and stabilize the social and economic development in the region.

Thanks to the close instruction of the Government, the project has been finally completed, overcoming a lot of difficulties while in construction, particularly the clearance of floor space for the Highway with a lot of blockages removed. 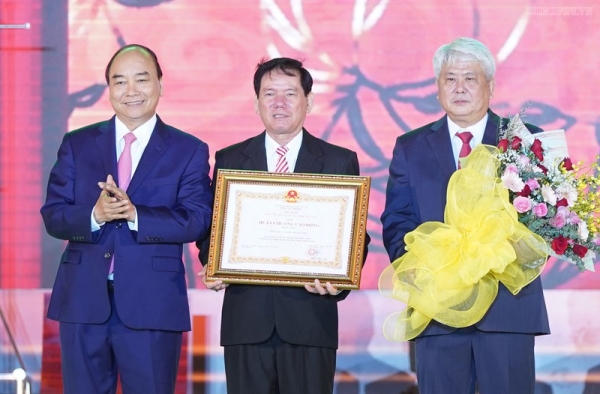 Speaking at the event, Prime Minister highly appreciated the efforts made by Tra Vinh Party Committee and people in their social and economic development and improvement of the people’s life.

The Prime Minister further said that 2020 is of great importance to the province’s economic and social development. So it is necessary for the province to do the popular mobilization better so as to be able to strengthen the unity block for the great purposes of national building.

On the occasion of the upcoming 2020 Lunar New Year, Tet holidays, the Prime Minister, on behalf of the Party and State leaders, awarded Tra Vinh Province with Labor Order, First Class./.

On the occasion of the 90th founding anniversary of the Communist Party of Vietnam (February 3, 1930 – February 3, 2020, the Party Central Committee’s Organizational Committee in coordination with Nhan Dan Daily, the Communist Magazine, the Vietnam Television and the Vietnam Journalists’ Association organized the 4th National Press Award on Party Building Presentation Ceremony, called the Golden Hammer-Sickle Award 2019. 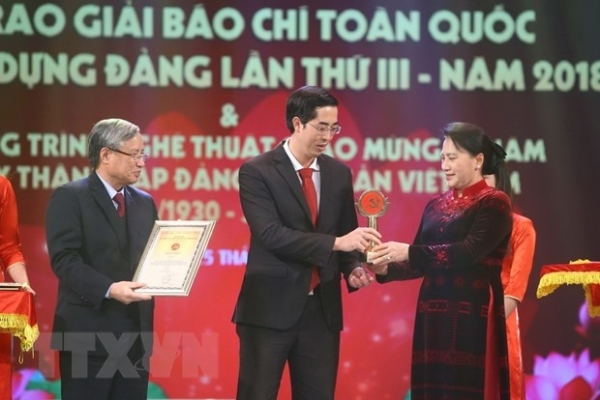 Chairwoman of National Assembly Nguyen Thi Kim Ngan and Tran Quoc Vuong, standing member of the Party Secretariat present A Prize to authors and group of authors who won the Golden Hammer-Sickle Award

This year, the organizational committee received 1,660 works with different subjects from nationwide competitors. As a result, 57 most outstanding works won the prizes. There are 25 consolation prizes 2 new prizes.

In this year’s competition, the quality has been improved. A lot of contending articles cover various subjects and fields, reflecting the new aspects of the Party’s building.

A lot of works have contributed to developing the theoretical thinking concerning the Party building. Some of the works reflect in a comprehensive way the correlation between the Party building and the building of the political system, the social and economic development, national defense and security and the anti-corruption combat.

The National Press Award named “the Golden Hammer-Sickle” has created a spillover that stirs the vitality and more motivation among the talented pressmen with good morality.

22 criminals involving in the special serious cases in Dong Tam commune, My Duc District, Hanoi, on January 1, 2020, are to be prosecuted, announced the Hanoi Police’s Investigation sector. 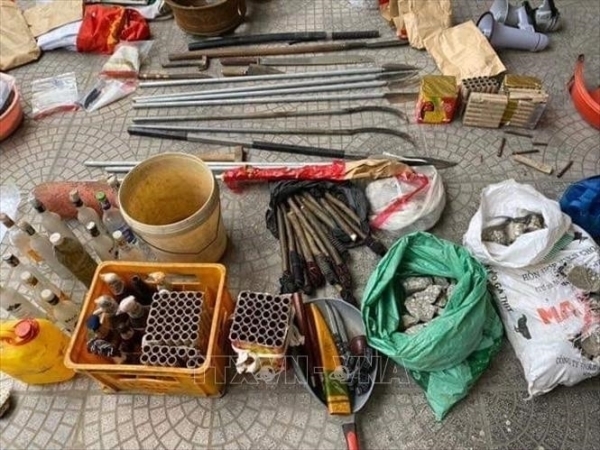 With what having occurred in Dong Tam Commune, My Duc District, the Police Investigation sector decided to detain and prosecute 20 accused persons who have caused great turmoil and fought against the police who were executing their duties./.