ASEAN Foreign Ministers express their concern over the East Sea in the Joint Statement and the President and General Secretary chair an anti-corruption meeting are among the most outstanding information in the week.

The 52nd ASEAN Foreign Ministers’ Meeting (AMM-52) and its relevant meetings were officially opened in Bangkok,  Thailand on July 31, 2019 under the chair of Foreign Minister of Thailand Don, Pramudwinal. 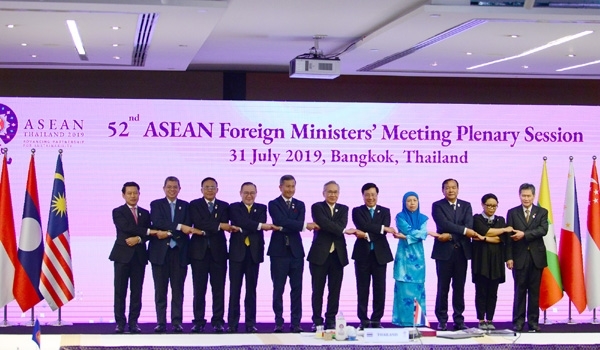 Prime Minister of Thailand Prayut Chan-o-cha and ten ASEAN Foreign Ministers were on hand at the opening meeting.

The Foreign Ministers express their concern over the accretion, especially the recent serious incidents on the East Sea, thus eroding the trust and increasing tension, resulting in doing harm to peace, security and stability in the region.

Speaking at the meeting, the Vietnamese Deputy Prime Minister and Foreign Minister Pham Binh Minh stressed that the East Sea issue has developed complicatedly, including the unilateral actions such as militarization and increase of military exercises, especially the survey ship HD-8 of China escorted by Chinese maritime surveillance ships encroached upon Vietnam’s exclusive economic zone and continental shelf to carry out illegal surveys. These actions have seriously violated Vietnam’s sovereignty and jurisdiction in accordance with the 1982 UN Convention on the Law of the Sea (UNCLOS).

More seriously, China has renovated and accreted on a large scale and militarized the disputed structures on the sea. These developments have eroded the trust and increased the tension, thus making direct influence on peace, stability, security, safety and freedom of navigation and aviation in the East Sea, violating DOC and running counter to the commitments to maintaining the favorable environment for the COC negotiation.

He then called on the restraint without any unilateral action detrimental to the process of dialogue and cooperation in the region.

The AMM’s Joint Statement has clearly reflected the current tense situation on the East Sea which is elevated to the different and more serious level./.

General Secretary and President Nguyen PhuTrong on July 26, 2019 chaired the anti-corruption meeting to review the work done and assess the results in the first 6 months of the year. 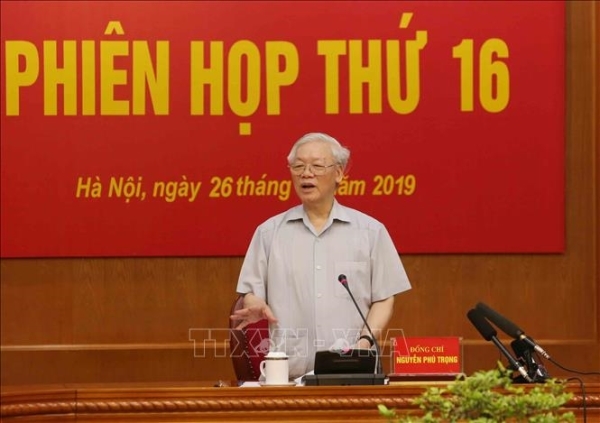 Speaking at the meeting, General Secretary and President nguyenPhuTrong stressed that the Party members, officials and people have paid much attention to the assessment of the anti-corruption work in recent time.

In the past 6 months, the anti-corruption work has been enhanced in the intensive and extensive manner. This work has been ever more methodically and carefully implemented. The inspection and treatment of the corruption cases have been well carried out. As a result, corrupted assets have been distrained, accounts frozen and assets transfer checked, bringing about a value of VND 10,000 billion.

It is an imperative task that there will be no corrupted Party members and officials in the upcoming Party tenure. To this end, it is necessary to conduct the inspection and examination work in a synchronous and resolute way so as to be able to sort out and select the right men for the Party’s leadership./.

On August 1, 2019, the regular meeting of the Government was held under the chair or Prime Minister Nguyen Xuan Phuc to discuss the social and economic situation in July and in 7 months of the year. 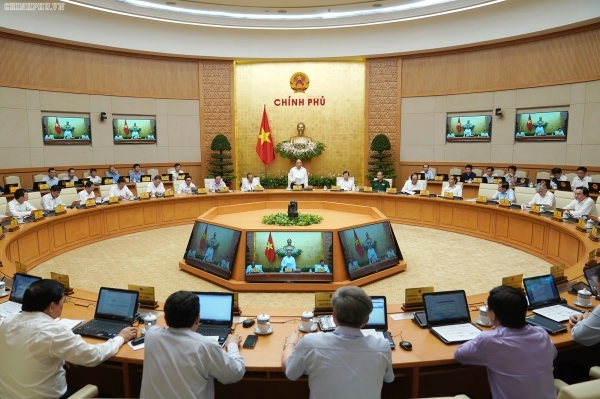 The Prime Minister analyzed the social and economic situation in the context of the difficult world economy. However, Vietnam has still seen its positive development with its good economic prospect in 2019. IMF has forecast 6.5% for Vietnam’s economy; WB, 6.6%; ADB, 6.8% and HSBC, 6.7%.

Judging the social-economic situation in July, the Prime Minister said that there have been positive developments with macro picture having seen the good direction. CPI in July increased by 0.16% as against that in the previous month. The total budget revenue shows good sign. The agricultural sector continues to see encouraging development. The service sector continues to achieve an impressive growth with the total number of international tourist arrivals in July having increased by 8%.

However, as the Prime Minister pointed out, there are still a lot of difficulties in the agricultural sector with the long heat wave hitting the Central part; while the Highlands has been hit by the African swine fever epidemic.

It is necessary to make an all-out efforts to resolve these big problems so as to be able to create the favorable conditions for living and production./.

A lot of goods items get price hike; CPI in July increases by 0.18%

According to the General Department of Statistics on July 29, CPI in July has increased by 0.18% as compared to that in June. 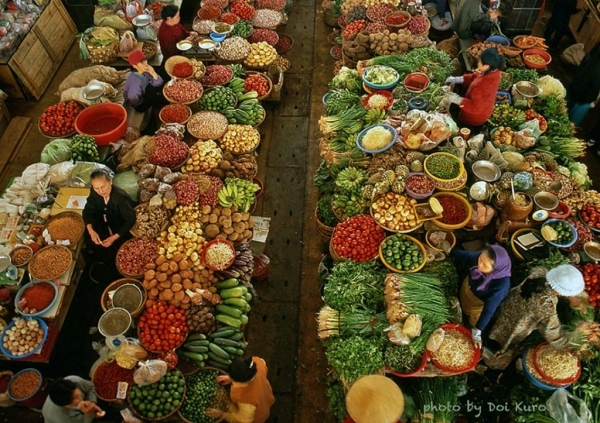 On average, in July, CPI has increased by 2.61% year on year. This is due to the fact that the price of input materials has inclined to increase again; the African swine fever epidemic has lasted a long time in 62 provinces and cities with over 3.7 million pigs having been destroyed.

In other events, the gold price has also been raised with the SJC gold price being put at VND 3.97 million per one tenth of a tael./.

Dengue fever in danger of breaking out on a large scale

Dengue fever is reportedly in danger of breaking out in many localities nationwide. 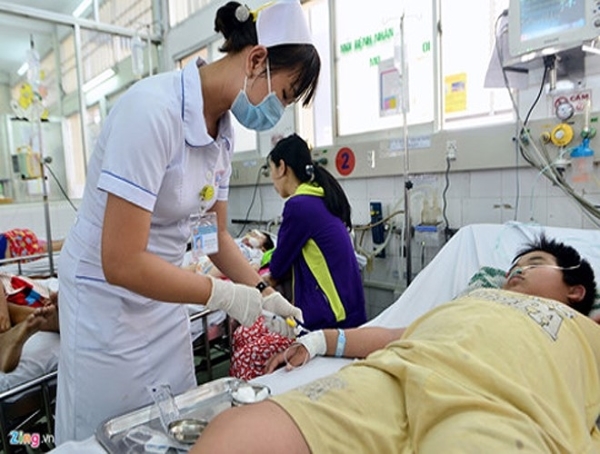 There are over 105,000 dengue fever cases nationwide so far, including 10 deaths. This has a tendency to increase.

This is due to the long heat wave with heavy rains in between, thus impeding the spray against mosquitoes in many localities.

According to experts, in the coming time the dengue-fever cases will increase and are in danger of breaking out in a lot of localities nationwide.

To guard against the spread of the dengue fever, it is necessary to increase the prevention methods by enhancing the monitoring work and discovering in time the outbreak of the epidemic./.

On August 1, 2019, 85 meters on Highway 91 were discovered having been sunk into the Hau River. Immediate measures have been taken by the Ministry of Transport to handle with the situation. 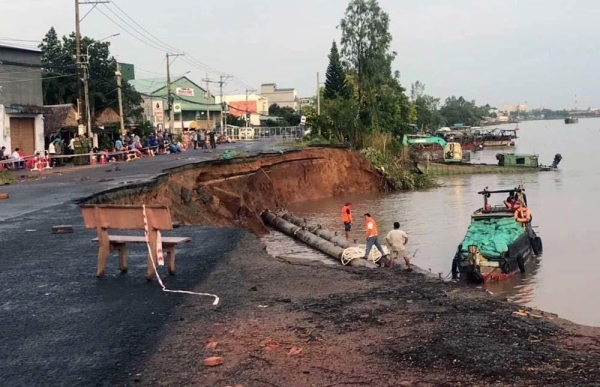 On August 1, about 85 meters on Highway 91 were sunk into the Hau River

Even there is such a land erosion, there was not any loss of human live and property. 15 households in the area were helped by the local authority to be relocated out of the danger area, The remaining 11 households are to be relocated to safer places soon.

A press release was made by the Ministry of Transport, urging the local people to overcome the disaster as soon as possible./.

According to the Ministry of Education and Training, Vietnam has won two gold medals in the international chemistry Olympiad  in 2019 organized in France. 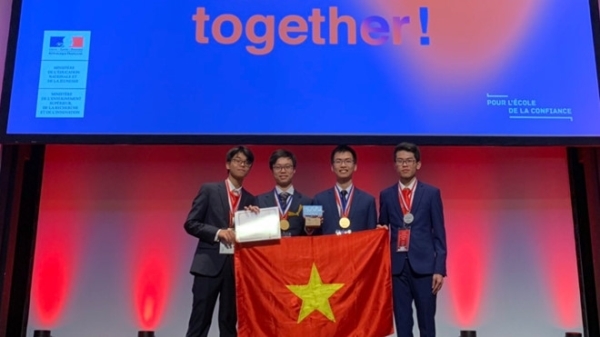 Winners of 2 gold medals and 2 silver medals at the international chemistry Olympiad organized in France.

With this achievement, Vietnam ranks the 5th after China, South Korea, Russia and USA.

This is the 51st international chemistry competition with the participation of over 300 competitors from 80 countries and territories./.