Italian Prime Minister Giuseppe Conte’s official visit to Vietnam and reaction of Vietnam to speech of Singaporean Prime Minister Lee Hsien Loong are among the most outstanding information in the week.

Prime Minister Giuseppe Conte of the Republic of Italy has paid an official visit to Vietnam on June 5-6, 2019 at the invitation of Prime Minister Nguyen Xuan Phuc. 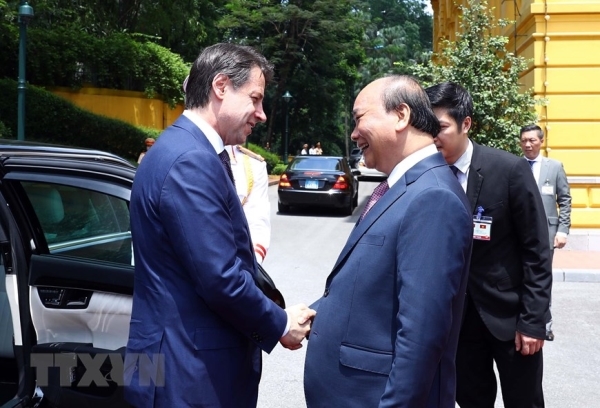 After that, the two sides held talks at the Government’s Office.

In the context that the relations between the two countries are finely developing and the 45th anniversary of establishing the diplomatic relations (1973-2018) and the 5th anniversary of deploying rhe strategic partnership (2013-2018) have just been celebrated, Prime Minister Nguyen Xuan Phuc affirmed that Vietnam has always attached great importance to the friendly relationship and multifaceted cooperation with Italy, an important EU member.

Prime Minister Giuseppe Conte affirmed that the Italian Government has always attached importance and wished to enhance further the strategic partnership with Vietnam, regarding Vietnam as its top partner in Southeast Asia, reflecting through its selection of Vietnam as the venue for 3r Summit Dialogue on ASEAN-Italy Economic Relations.

In terms of the bilateral relations, the two Prime Minister highly appreciated the relations and cooperation between Vietnam and Italy in various fields, especially since the two countries established the Strategic Partnership in January 2013.

The two Prime Minister unanimously agreed to boost the exchanges and contacts at different levels so as to promote cooperation in the political, diplomatic, economic, cultural, educational and training areas, among others.

Economically, the two sides unanimously agreed to create favorable conditions for the entry of goods of the two countries’ markets and strive to increase the bilateral turnover to USD 6 billion from about USD 5 billion by 2020 and to USD 10 billion for the years after that. The two Prime Ministers also stressed on the importance of the Vietnam-EU Free Trade Agreement (EVFTA) and the Vietnam-EU Investment Protection Agreement (EVIPA).

Prime Minister Giuseppe Conte affirmed his support to the early possible signing and ratification of these Agreements, thus making a contribution to enhancing the investment and trade relations of each other’s market, satisfying the interests of all parties concerned.

The conference brought together over 300 enterprises from Italy and the ASEAN countries. 150 Vietnamese enterprises were also on hand.

Speaking at the Conference, Prime Minister Nguyen Xuan Phuc called on the Italian enterprises to boost investment and business in Vietnam and in the ASEAN Community whose GDP is put at around USD 3,000 billion./. 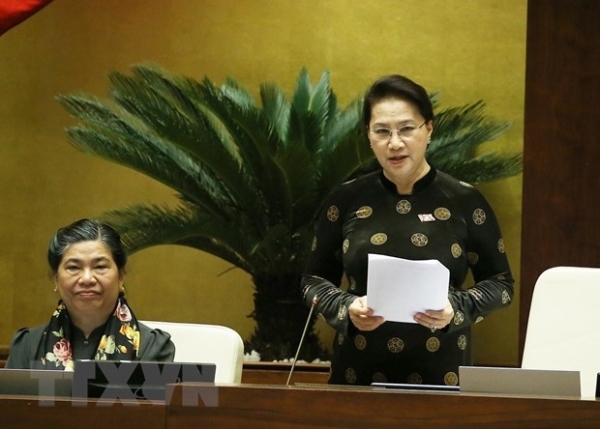 Chairwoman of the National Assembly Nguyen Thi Kim Ngan said at the closing of the Questions-Answers session that as short as this session is (in two and a half days), the session has seen a lot of improvements in content as well as in operation, catching the attention of the entire people.

Fundamenally, Chairwoman of the National Assembly Nguyen Thi Kim Ngan said, all the deputies are pleased with the contents of the answers of the Cabinet members. All the questions have been clearly answered with high accountability, reflecting the positive changes of the sectors concerned.

On the other hand, the National Assembly requests the Government and sectors to study and accept seriously all the contributed opinions from the deputies and voters so that they can be able to find the better and practical solutions to create positive changes for the areas under their responsibilities.

All the ideas contributed to the questions-answers session will be seriously analyzed and studied for the preparation of resolution to be submitted to the National Assembly for consideration and approval at the end of the session, just to serve it as a legal basis for implementation and monitoring of implementation to meet the requirements of social and economic development of the country./.

Vietnam does not exercise monetary manipulation to win trade advantage

In answering the questions relating to Vietnam being listed in monetary monitoring by the US, on the June 6 Press Briefing, the Foreign Ministry Spokeswoman Le Thi Thu Hang pointed out that the Vietnamese Government has always been persistent in boosting the economic restructure and improving the transparent investment and business environment for the enterprises at home and abroad. It is solidly affirmed that Vietnam has never and does not have any intention to exercise monetary manipulation to win trade advantage. 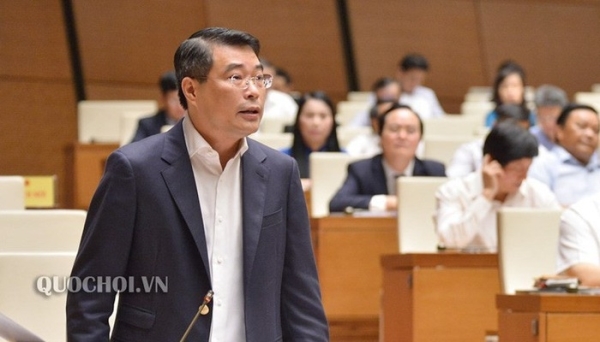 General Governor Le Minh Hung of the State Bank of Vietnam affirms that Vietnam does not use the policy on macro economy, including the monetary and exchange rate policy to create the imbalanced trade position

The relations between Vietnam and the USA in recent time, especially in the trade area, have seen positive changes. The Vietnam-US economic and trade cooperation is both the center and motivation in the comprehensive partnership between the two countries. Vietnam is ready to exchange with the US side on the issues that may arise in the relations between the two countries, Ms Le Thi Thu Hang said.

According to General Governor Le Minh Hung of the State Bank of Vietnam, Vietnam does not use the macro economy policy, including the monetary policy and exchange rate to create the imbalanced trade advantage. Vietnam will continue to provide more necessary information on this issue if the US needs./.

On June 6, 2019, at the regular Press Conference, when asked about the speech of Singaporean Prime Minister Lee Hsien Loong at the Shangri-La Dialogue about Vietnam’s “occupation” of Cambodia, the Foreign Ministry Spokeswoman Le Thi Thu Hang pointed out that Vietnam has had official and unofficial contacts with the Singaporean partner and also sent a note to the Singaporean Embassy in Hanoi and it is believed that the Singaporean side has had and clearly understoof Vietnam’s message. 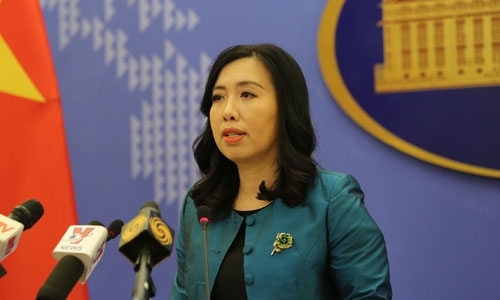 On June 4, the Foreign Ministry of Vietnam also stressed that Vietnam find it a regret for the speech that did not reflect objectively the historical facts, thus making no-good impact on public opinion. It is the fact that Vietnam had made great sacrifices in together with the Cambodian people putting an end to the genocidal crimes of Khmer Rouge and this fact has been recognized far and wide. It is known to all that on November 16, 2018, a Special Court to put the crimes committed by Khmer Rouge on trial. Its jurisdiction reflects objectively the historical truth, and it is highly appreciated by the UNO and the international community.

Being an active and responsible member of ASEAN, Vietnam has been together with other members leaving no stone unturned for the purpose of building a strong, unified and united ASEAN Community with the role as the center of the region.

On June 3, speaking before the media at Phnom Penh International Airport, Defense Minister of Cambodia Tea Banh observed that what Lee Hsien Loong said is untrue and does not reflect correctly history./.

As one of the first Vietnamese pilots graduating from the US Aviation Leadership Program (ALP), Captain Dang Duc Toai expressed his wish to soon return to homeland to help train his team mates. 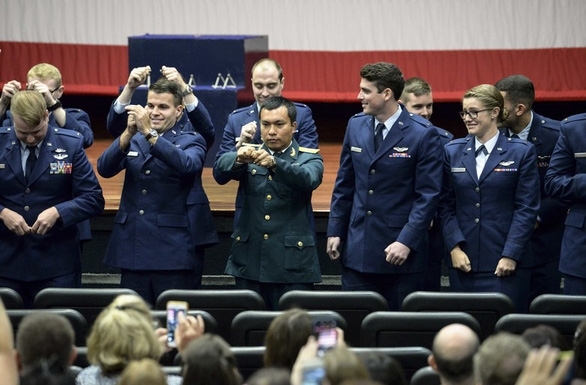 Captain Dang Duc Toai joins the graduation ceremony on May 31, 2010 at Columbus Air Force Base

Captain Toai joined the ALP in 12 months and graduated on May 31 at the Columbus Air Force Base, Mississippi, USA. During the training course, Captain Toai has 167 flight hours with the training airplane T-6 Texan II.

And Lieutenant General Steve Kwast highly appreciated that this is the new progress in the Vietnam-US military cooperation. Vietnam’s participation in ALP is an important milestone for the cooperation between the US Air Force and the Vietnam Air Force. This training will help enhance the operational abilities on the air and the sea, he said, further stressing that this relationship and cooperation wll help guarantee peace and stability in the region and world./.

A number of officials discipline

At its 36th session held on May 29-31, 2019, the Party Central Committee’s Examination Commission considered and disciplined a number of officials.

Among those individuals and collective units being disciplines, there are the Standing Committee of Son La Party Committee for failing to observe the principles of democratic centralism and working regulation. Accordingly, Pham Van Thuc, Provincial Party Committee member and Vice Chairman of Son La Provincial People’s Committee was given a warning for violating the organizational principles during the 2018 national high school examinations.

Last but not least, Huynh Quang Hai, Vice Minister of Finance, was also disciplined in the form of being warned for violating the exemplary life style and other stipulations of the Party, making bad impacts on the prestige of the Party and the Finance Ministry./.