Grand opening of the 7th session of the National Assembly, 14th tenure and Prime Minister Nguyen Xuan Phuc visits Russian Federation are the most outstanding information in the week.

A grand opening of the 7th session of the National Assembly, 14th tenure, was launched on the morning of May 20, 2019 in Hanoi. 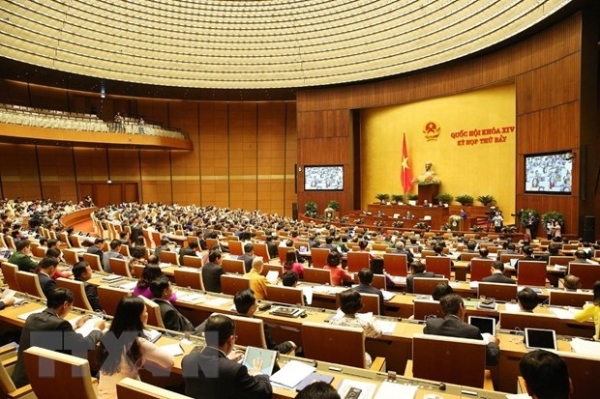 Before the session begun, the leaders of the Party and State and representatives of the National Assembly delegations laid a wreath and paid tribute to President Ho Chi Minh at his mausoleum.

Opening the session, Chairwoman of the National Assembly Nguyen Thi Kim Ngan stresses that the 7th session happens in the context of a lot of complicated developments in the region and the world. The world economy is predicted to see signs of slow growth and hidden challenges. The economic and economic differences among a number of big countries have made great impacts on the economy of many countries, including Vietnam.

Domestically, there are still a lot of difficulties and limits, particularly the natural disasters and epidemics, which are affecting adversely the social and economic development and the people’s life.

2019 is the year of important significance in fulfilling the targets of the five-year plan of social and economic development (2016-2020). Therefore, a heavy task requires the greatest efforts from the entire political system, the entire Party, people and army together with the enterprise community to overcome difficulties and challenges to fulfil the targets of social and economic development in 2019.

At this session, the National Assembly will consider and adopt 7 law projects, 2 draft resolutions and contribute opinions to 9 law projects with a view to institutionalizing policies and lines of the Party, thus making a contribution to ensuring the unity and synchrony of the legal system.

Chairman of the Vietnam Fatherland Front Tran Thanh Man delivered the report reviewing the opinions and petitions of the voters and people to the 7th session of the 14th National Assembly./. 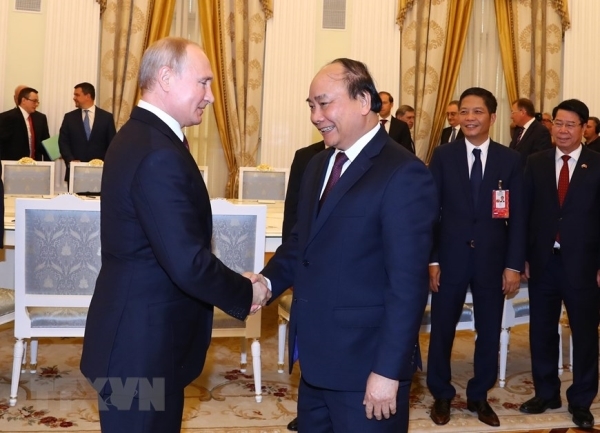 On the afternoon of May 22, Prime Minister Nguyen Xuan Phuc had a retreat meeting and held talks with Prime Minister Dmitri Medvedev of the Government of the Russian Federation.

In a friendly, reliable and open atmosphere, Prime Minister Nguyen Xuan Phuc and Prime Minister Dmitri Medvedev exchanged the orientations and measures to enhance further the relations and cooperation between the two countries in the areas which have still a lot of potentials.

Concluding the talks, the two Prime Ministers witnessed the signing ceremony of many cooperation documents in the nuclear energy, oil and gas, construction, tourism, justice areas and cooperation of localities of the two countries.

On the afternoon of May 22, 2019, Prime Minister Nguyen Xuan Phuc had an audience with President Vladimir Putin of the Russian Federation.

Russian President Vladimir Putin stressed that the Vietnam-Russia Comprehensive Strategic Partnership has got a high reliability and he welcomed the official visit of Prime Minister Nguyen Xuan Phuc to the Russian Federation this time in the context that the two countries are to organize the activities to celebrate the 25th anniversary of signing the Treaty on the Fundamental Principles of the Vietnam-Russia Friendly Relationship and the 70th anniversary of diplomatic establishment between the two countries.

On the night of the same day, Prime Minister Nguyen Xuan Phuc and Prime Minister Dmitri Medvedev attended the opening ceremony “The Vietnam Year in Russia and the Russian Year in Vietnam” held in the Zaryadye Convert Hall, Moscow.

On this occasion, the Vietnam-Russia Business Forum was organized on May 22, 2019. The bilateral trade turnover in 2018 reached USD 5 billion, a 30% increase over that in 2017, but it is yet to meet the potential of the two countries as Prime Minister Nguyen Xuan Phuc viewed it./. 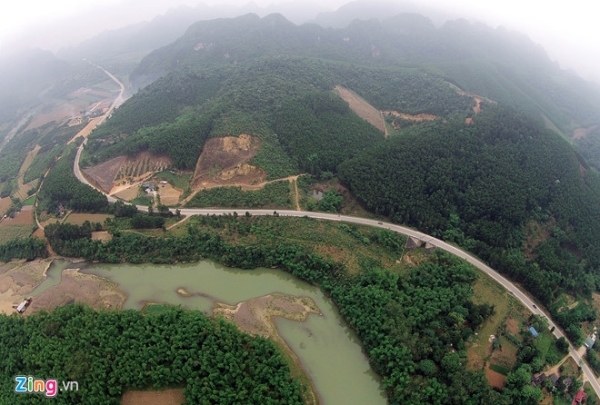 Ho Chi Minh Road is being upgraded and widened, stretching from Cao Bang Province to Ca Mau Cape. The 3,000km long project is expected to ne completed in 2020

On this occasion, Truong Son Road-Ho Chi Minh Road is classified as the Special National Relic./.

Public debt in Vietnam fall to lowest level since 2015 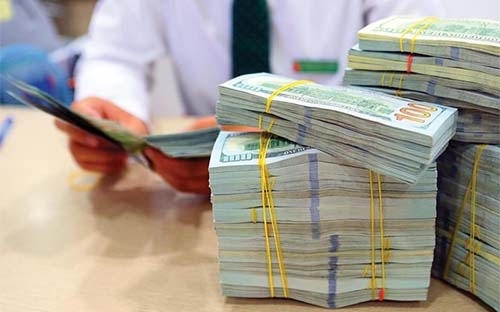 (Photo: Illustraition on the internet)

This figure is based on the implementation of loaning plan, debt paying and debt limit. Accordingly, public debt has been reduced to below 60% of GDP or at 58.4% level of GDP, also the lowest level in the past 3 years.

Or in other word, each Vietnamese citizen has to bear a public debt of VNS 32 million in 2018.

Vam Cong Bridge across the Hau River was officially opened to traffic on May 19, 2019. 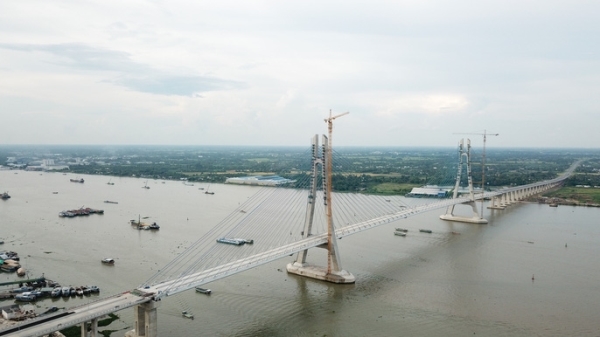 Vam Cong cable-stayed bridge, the second across the Hau River after Can Tho Bridge

Vam Cong Bridge is 3km long, 24.5m wide with 4 motorized lanes, connecting Lap Vo District (Dong Thap province) and Thot Not District (Can Tho City). This is built with the preferential loan of USD 200 million from the Government of the Republic of Korea and the corresponding capital of the Vietnamese Government.

This is the second cable-stayed bridge across the Hau River; the other bridge is Can Tho Bridge.

Abivin – a startup supplying software to manage the optimal supply chain of transport, a representative of Vietnam, has surpassed over 40 countries in the world to become the champion of Startup World Cup 2019, winning a prize of USD 1 million for investment. 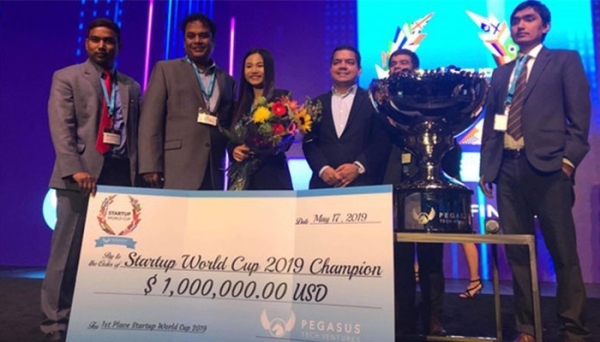 (Photo: Illustraition on the internet)

Abivin was the champion of the Techfest Vietnam 2018 and was nominated by the Ministry of Science and Technology as the candidate to participate in Startup World Cup organized on May 17, 2019 in San Francisco, USA, among other 40 countries in the world, including Japan, USA, Canada, Brazil, India, China, Singapore and the Republic of Korea.

Startup World Cup is the competition for the world top startup organized by Fenox Ventures with the participation of the experts and investors from Silicon Valley and other startup enterprises in the world./.

Even holding the first position as the largest cave in the world, the real size of Son Doong Cave should possibly be added with another 1.6 million cubic meters more thanks to the underground river connecting the recently discovered Thung Cave. 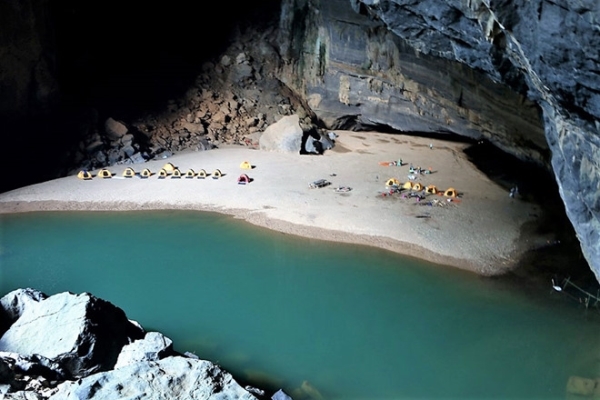 Inside En Cave where there is an underground river

This information is supplied by CNN from the English case expert Howard Limbert.

The English divers discovered the underground river connecting Son Doong Cave to the nearby Thung Cave.