Vietnam's tech startups are emerging as a force to be reckoned with as foreign private equity funds bet the country's talented young brains will yield more successes like the international hit game Flappy Bird. 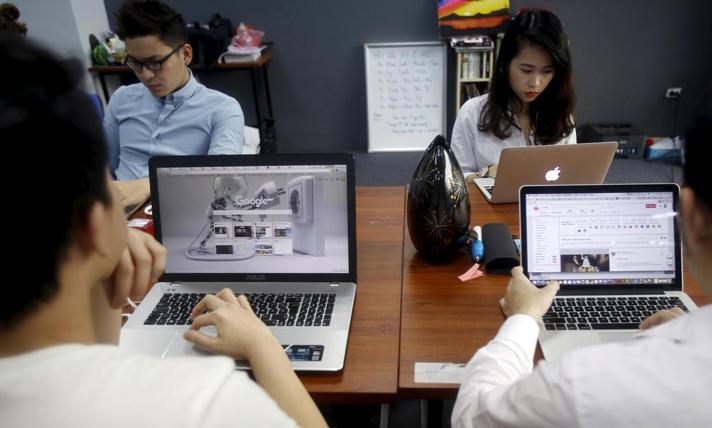 Just last month, financial powerhouses Goldman Sachs and Standard Chartered PLC raised their investment in the operator of e-wallet MoMo by $28 million, while Silicon Valley-based venture capitalist 500 Startups announced a $10 million Vietnam-focused fund.
One of 500 Startups' shoestring investments is in automated marketing service Beeketing, founded by college drop-out Truong Manh Quan, 26, who estimates revenue this year of $2 million predominantly from customers in the United States.
"We thought we'll invest in something like 10 to 20 companies over a 12-month period," said 500 Startups partner Eddie Thai. "But it quickly became clear, there's a lot more good companies to invest in."
The startup boom is the latest chapter of Vietnam's growing presence in the global tech industry. In the three years since Hanoi-based .GEARS released Flappy Bird, Vietnam emerged from relative obscurity to become the Southeast Asian production hub of South Korean giant Samsung Electronics Co Ltd.
Meanwhile, global tech firms that have long had factories in Vietnam - such as LG Electronics Inc, Panasonic Corp, and Toshiba Corp - have also been expanding into research and development.
Part of Vietnam's appeal is a cheaper workforce than in China, as well as membership of the Trans-Pacific Partnership trade bloc and free trade deals with the European Union, plus incentives aimed at luring investment away from neighbors.
Of particular interest to venture capitalists, however, is Vietnam's tech-savvy population with a median age of just 30.
"Vietnam has the highest-performing computer science students I've ever encountered," said Neil Fraser, a software engineer at Alphabet Inc's Google, who visited local schools.
The Organisation for Economic Co-operation and Development ranks Vietnamese 15-year-olds above peers in the U.S., Australia and Britain in science and maths.
"The exercises I watched them solve ... would be considered challenging problems for a Google hiring interview," Fraser said.
E-COMMERCE
Data covering Vietnamese startups is scarce, but Singapore-based startup community Tech in Asia - itself a startup with investors including Japan's SoftBank Group Corp - reckons there are about 1,500 in operation. That number, relative to population, represents a higher concentration than the 2,100 in Indonesia, 2,300 in China and 7,500 in India.
Startups in Vietnam, like Indonesia, thrive with little government support beyond legal advice and $10,000 cash under a scheme dubbed Vietnam Silicon Valley. In contrast, China announced a $6.5 billion fund mainly for tech and green energy startups last year, while India pledged $1.5 billion in January.
"I plan to grow this company for five years then sell it," said Beeketing's Quan. "Then I may become an angel investor myself."
Most of Vietnam's startups are in e-commerce, a sector where sales grew around 35 percent last year to $4 billion, and whose 2.7 percent contribution to overall retail sales indicates ample room for growth.
Supporting e-commerce are tech-related logistics startups such as Giaohangnhanh which helped reduce overall logistics costs in Vietnam to a fifth of gross domestic product last year from a fourth just one year earlier.
Other startups include the operator of food-finder app Lozi that received a combined seven-figure investment from DesignOne Japan Inc and Singapore's Golden Gate Ventures.
Tran Minh Son, one of four Lozi founders, quit university in Pennsylvania to concentrate on the app.
"It was like cutting my legs off so I've no way back," he said. "My parents complained quite a lot. They said, 'You're not my son - move out'."
Lozi, launched in 2012, now boasts 600,000 registered users and 4 million unique visits each month.