Vietnam's Bamboo Airways plans to fit its new Boeing 787 Dreamliners with General Electric (GE) engines in a deal valued at about US$2 billion, and continue expanding despite the devastating impact the coronavirus is having on global aviation.

The airline, which only began operations last year, expects to sign a contract with GE for 60 engines and services by the end of 2020, chairman Trinh Van Quyet said in an interview with Bloomberg News. The company also aims to list in Vietnam in the fourth quarter after scrapping a second-quarter share listing because of the virus outbreak, he said.

While the pandemic forced Bamboo Air to cut flights and led to a loss of more than 1.5 trillion dong (S$91.3 million) in the first quarter, Mr Quyet still hopes to almost double the carrier's domestic routes to 60 this year and expand its international destinations from six to 25. The airline, owned by hotel and leisure company FLC Group, counts South Korea and Taiwan as its overseas routes.

The ambitions seem at odds to global aviation industry in turmoil, with airlines the world over operating only a small fraction of their usual flights, cutting salaries, furloughing staff and reducing or delaying aircraft orders. This week, Boeing chief executive officer Dave Calhoun said a major US airline could fail, while the International Air Transport Association warned that demand for flights will lag pre-coronavirus forecasts for at least five years.

Indeed, rapid growth in Vietnam's aviation market is coming to a shuddering halt. National carrier Vietnam Airlines suffered a first-quarter loss of 2.61 trillion dong, while budget operator VietJet Aviation posted a net loss of 989.5 billion dong. The Ministry of Transport said Tuesday it won't consider applications for new airlines as it focuses on recovering from the pandemic. Conglomerate Vingroup already abandoned plans to start Vinpearl Air, saying in January that such a move could lead to oversupply.

Vietnam's aviation authority is allowing a gradual resumption of domestic services after halting virtually all routes in April, but most international flights remain suspended and passengers arriving from abroad must be quarantined for 14 days. The World Health Organization's Vietnam representative has warned the government it could face a second wave of infections because the global outbreak will last many more months if not years.

Mr Quyet is undeterred, saying the Vietnamese market is more resilient than most and people will be comfortable about flying again as coronavirus infection numbers have been low. The country has reported only 288 virus cases and no deaths. Vietnam boasted one of the world's fastest-growing aviation markets before the pandemic, with domestic airlines serving 55 million passengers in 2019, up 11 percent from the previous year, according to the government.

"This is a feasible plan as we see the travel demand has been picking up in the domestic market," Mr Quyet said, adding that he expects domestic tourism to increase because international travel has been curtailed. 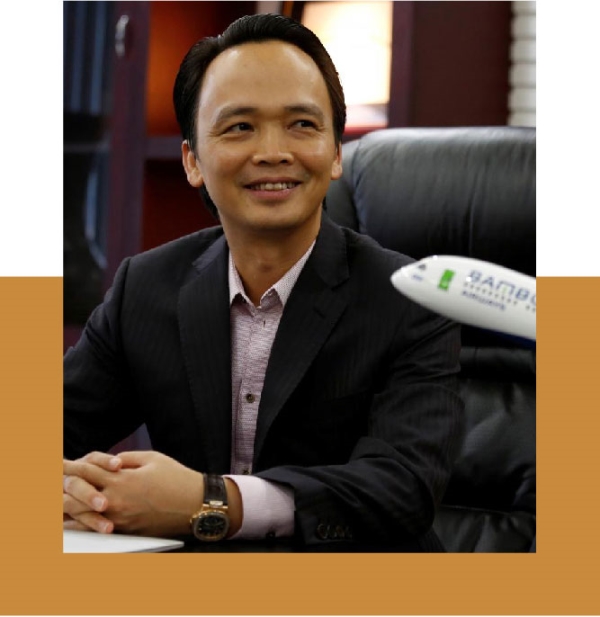 The upstart airline has been "extremely ambitious from the beginning, so nothing surprises me when it comes to what they are saying," said Brendan Sobie, a Singapore-based independent aviation analyst. The airline made a risky bet last year when it entered the market dominated by VietJet and Vietnam Airlines, he said. "The two existing airlines were already competing intensely."

Now Bamboo Air will be joining its competitors hurrying to get back into the air with 70 percent domestic operating capacity by the end of June, Mr. Sobie added."The ramp-up period is quite aggressive," he said. "Bamboo is still the new guy in town. So it has this catch-up drive. It doesn't want to lose to the others while they are weighing into the market."

The GE engines will power the 787s Bamboo Air has on order, Mr Quyet said. The carrier last year signed a contract to purchase 10 787-9 Dreamliners worth about US$3 billion following a commitment for 20 Dreamliners with a list price of US$5.6 billion in 2018.

GE representatives declined to comment.The carrier, which has a fleet of 22 aircraft at the moment, also ordered 50 Airbus SE A321neo planes over the past two years.

Bamboo Air will lease more planes this year to meet its expansion, Mr Quyet said, adding that it doesn't plan to buy more aircraft in 2020. The airline currently operates 45-50 flights a day domestically and expects to expand that to more than 100 beginning in June, about 80 percent of its capacity before the outbreak, the chairman said.The airline is also looking to begin flights to the US by the end of 2021 or in 2022, he said.