Vietnam will spare no effort to further promote its relations with the European Union (EU), Prime Minister Nguyen Xuan Phuc said while receiving Federica Mogherini, Vice President of the European Commission and High Representative of the EU for Foreign Affairs and Security Policy, in Hanoi on August 5. 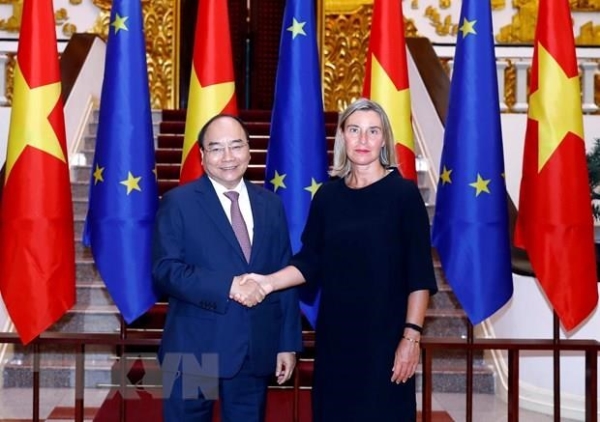 The two sides have effectively carried out a wide range of cooperation mechanisms, including the joint committee under the EU-Vietnam Comprehensive Partnership and Cooperation Framework Agreement (PCA) and the EU-Vietnam Human Rights Dialogue, he said, adding they have begun implementing the Voluntary Partnership Agreement on Forest Law Enforcement, Governance and Trade (VPA/FLEGT).

The PM spoke highly of the signing of the EU-Vietnam Free Trade Agreement (EVFTA) and the EU-Vietnam Investment Protection Agreement (EVIPA), and proposed the European Parliament soon ratify the pacts so that both sides can realise their cooperation opportunities, and affirm their commitments to free trade and investment.

He also recommended the EU to continue assisting Vietnam in implementing measures to remove the “yellow card” warning on Vietnamese seafood and fight against illegal, unreported and unregulated (IUU) fishing. Besides, he suggested the EU create favourable conditions for Vietnamese businesses to expand their markets in the EU.

Hailing the fruitful defence cooperation between the two sides in the past time, PM Phuc expressed his hope that together with other bilateral agreements on science-technology and environmental protection, Vietnam and the EU will ink a Framework Participation Agreement (FPA) for peace, cooperation and development.

Welcoming the EU’s and Mogherini’s interests in the Southeast Asian region, PM Phuc expected that the EU-ASEAN ties and the Vietnam-EU cooperation will be further enhanced in 2020 when Vietnam assumes the role as the ASEAN Chair and a non-permanent member of the United Nations Security Council (UNSC) for the 2020-2021 tenure.

Vietnam applauds the EU’s stance on supporting freedom, security and safety of navigation in the East Sea, he said, recommending the EU to maintain its viewpoint on heightening respect for international law, including the 1982 United Nations Convention on the Law of the Sea (UNCLOS), settling disputes through peaceful means, and not complicating the situation in the waters, contributing to maintaining peace, stability, and freedom, security and safety of navigation and aviation in the East Sea.

Mogherini, for her part, stressed that the Vietnam-EU ties have developed strongly in recent years, thereby helping to consolidate the EU’s relations with the ASEAN.

She highlighted her expectations about the EVFTA and the EVIPA, saying the deals lay the foundations for the two sides to step up bilateral relations in the future.

Speaking highly of Vietnam’s efforts to improve the ties with the EU across the fields of economy, culture, labour and cyber security, she said they provide a good basis for the European Parliament to adopt the agreements.

The EU official hoped the EU will coordinate more effectively with Vietnam in regional and international issues in 2020 when it shoulders the ASEAN Chairmanship and becomes a non-permanent member at the UNSC.