Vietnam has urged all sides involved in South China Sea disputes to discharge their legal duties and contribute to maritime security. 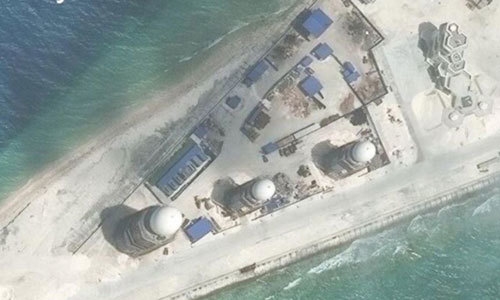 Vietnam has urged all sides involved in South China Sea disputes to discharge their legal duties and contribute to maritime security.
Countries need to strictly fulfill their responsibilities under international laws, including the 1982 United Nations Convention on the Law of the Sea (UNCLOS), Foreign Ministry spokeswoman Le Thi Thu Hang said Thursday.

All sides need to make positive contributions to the maintenance of peace, security, safety, maritime and aviation freedom in the East Sea, she said.

Hang was responding to a press question about U.S. senators reintroducing legislation last month committing the government to punish Chinese individuals and entities involved in "illegal and dangerous" activities in the South and East China Seas. Vietnam calls the South China Sea the East Sea.

The sanction bill, first introduced in March 2017, would require the government to seize properties in the U.S., revoke or not issue visas to anyone who engages in "activities or policies that threaten peace, security and stability" in the South China Sea. Activities targetted by the bill include land reclamation, the construction of islands, lighthouses and mobile communication infrastructure.

China claimed almost the entire South China Sea, including waters close to Brunei, Malaysia, the Philippines, Taiwan and Vietnam. It has also put up artificial islands turning them into garrisons.

China seized the Paracel Islands from South Vietnam by force in 1974, and has since been illegally occupying them.In 2012 it established the so-called Sansha City with the archipelago's Woody Island as its seat.The "city" also covers a number of reefs in the Spratly Islands that China seized by force in 1988 and the Scarborough Shoal.

Vietnam has full legal basis and historical evidence to assert its sovereignty over the Hoang Sa (Paracel) and Truong Sa (Spratly) Islands in the waterway, as well as legal rights over its waters in accordance with the UNCLOS.

The U.S., which is locked in an escalating trade war with China, has no claims in the waters, but has stepped up its freedom of navigation operations in the region by sending ships and aircraft often in recent time./.