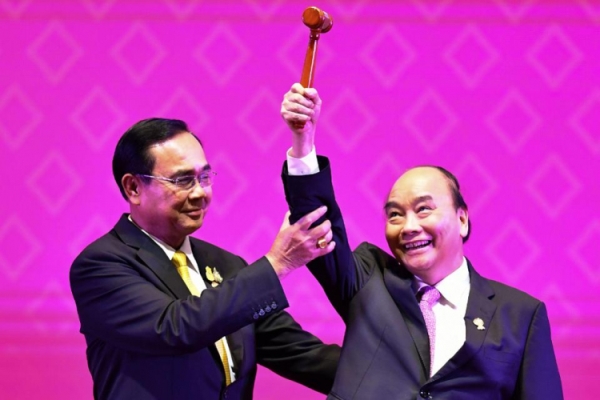 Vietnam took over the rotational chair of Asean, or the Association of Southeast Asian Nations, in January 2020, so it’ worth noting that Hanoi’s second foremost foreign policy priority after the South China Sea is reportedly the Mekong River region. While the South China Sea, where more than one-third of global shipping passes, is considered an overall Asean concern, the Mekong region is left to the five riparian countries in mainland Southeast Asia to deal with in view of China's upstream hydropower dams that have led to frequent droughts and depleted fish stocks in downstream communities, especially in Cambodia and Vietnam.

If Vietnam as Asean chair has its way, the Mekong may soon become an Asean matter, so providing the five riparian countries more leverage in grappling with China's unilateral hogging of water in the upper reaches of the river. In turn, if Asean can rally together behind both the South China Sea and the Mekong River, the 10-member regional organization would have more bargaining power vis-à-vis China, especially if it can enlist other major players such as Japan and the United States to be involved.

Given ongoing global power shifts and fluid regional dynamics in Asia, mainland Southeast Asia bordering and in proximity to the Mekong region—what might be called the "Mekong mainland"—has emerged as a distinct space of promising economic development, resource-sharing and capacity-building that demands greater cooperation among all stakeholders. Despite its immense water resources and the necessity of cooperative resource-sharing among riparian states, the Mekong mainland has had a loose and non-binding regional governance framework, revolving around the Greater Mekong Subregion (GMS) from the early 1990s.

This "first-generation" of Mekong regional cooperation spawned a clutch of cooperative agreements, featuring the Mekong Agreement (MA) and the Mekong River Commission (MRC) as well as the Mekong Institute (MI). Their overall and collective aims were to harness and facilitate the sustainable growth and development of the Mekong mainland countries, comprising Cambodia, China, Laos, Myanmar, Thailand and Vietnam, although China and Myanmar took on observer status at the MRC. 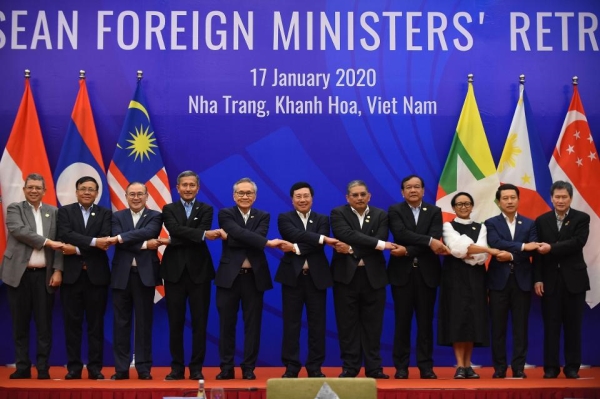 Foreign ministers of the Association of Southeast Asian Nations (ASEAN) pose for a group photo during a gathering in Nha Trang on January 17, 2020.

Almost three decades later, as mainland Southeast Asia's economies expanded briskly on the back of broader trade, investment and growth dynamics in Asean, the Mekong space has become more attractive. In the GMS context that includes the southern provinces of Yunnan and Guangxi, this region now offers a combined market of more than 350 million and an overall GDP of more than $1.2 trillion, with considerable upside potential. The GMS infrastructure connectivity has led to north-south and east-west roads and highways that traverse the entire mainland Southeast Asia, stretching from Kunming in Yunnan province to southern Thailand and from Myanmar's southeast to central Vietnam. What has been missing in the regional infrastructure development is rail. The downside of regional development in the Mekong region is the uneven water resource utilization between upstream and downstream riparian states.

While the first-generation cooperative vehicles from the GMS and MA to the MRC have been of great service in the recent past, recent economic development and geopolitical shifts have challenged the role, utility and efficacy of these established schemes. Clearly, there is a greater need for regional cooperation to keep pace with increased resource utilization in the Mekong region.

In particular, China's rapid economic development has engendered new ways and new mechanisms for promoting regional cooperation. Chief among them is the Lancang-Mekong Cooperation (LMC), established in 2015. Over the past several years, the LMC has held two Leaders' meetings in 2016 and 2018. The LMC has been offered and forwarded as the first and foremost "second generation" cooperative vehicle for the Mekong mainland.

On the other hand, China's LMC is bolstered by the country's Belt and Road Initiative, which envisages the China-Indo-China Peninsula Economic Corridor (CICPEC). Its Mekong mainland rail development is well underway in Laos, connecting Kunming to Vientiane on the banks of the Mekong. A rail connection from Vientiane through Thailand southwards to Malaysia and Singapore is in the BRI infrastructure blueprint. As a result, the Mekong mainland region has become a jigsaw for shared resource utilization and infrastructure development. What should be the rules and norms and governance frameworks to realize the next stage of regional cooperation among stakeholders has been contentious. And so has the compatibility between cooperative frameworks such as the MRC and LMC.

For its part as Asean chair, Vietnam has chosen the theme of "cohesive and responsive Asean." Underpinning this theme are five priorities of contributing to regional peace and stability, promoting regional connectivity and the sense of Asean identity and community, fostering external partnerships for peace and sustainable development, and capacity building for adaptability. In addition, Vietnam will also become a non-permanent member of the United Nations Security Council in 2020, a crucial year for such an up-and-coming country, which will also mark its 25th anniversary as an Asean member state.

Vietnam will benefit from Thailand's chair this year, and its major achievement in coming up with the Asean Outlook on the Indo-Pacific, a five-page document that addresses and navigates between the U.S.-led Free and Open Indo-Pacific and China's BRI. With the AOIP as the basis going forward in relations with the two competing superpowers, Vietnam can focus on more immediate priorities. If Vietnam can elevate Mekong issues in addition to the South China Sea in view of China's undue leverage from upstream dams, it will be a major accomplishment not just for Vietnam but for the entire Mekong mainland region south of China.

(This article was previously published in the Nikkei Asian News)