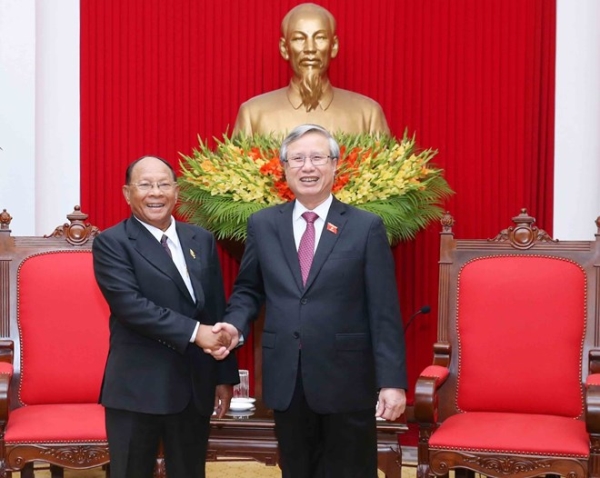 He congratulated Cambodia on its remarkable achievements in the recent past, including the results of the third mandate municipal and provincial town and district council elections on May 26.

Vuong conveyed his delight at the deeper and more effective cooperation across all fields between the two countries’ parties and states, which was significantly attributable to the contributions made by the Vietnamese and Cambodian parliaments.

The official hoped the Cambodian National Assembly and Samdech Heng Samrin will give stronger support to bilateral cooperation policies while continuing to increase experience and information exchanges; improve coordination at regional and international forums; and direct ministries, departments, and localities to effectively implement treaties and agreements signed by the two countries.

He proposed that the Cambodian parliament continue promoting and facilitating the issuance of legal documents for Cambodian people of Vietnamese origin, and urging Cambodia’s relevant agencies to closely work with Vietnamese counterparts for the early completion and signing of legal documents to recognise the completed 84 percent of the workload in border demarcation.

For his part, Samdech Heng Samrin congratulated Vietnam on its accomplishments gained over the years, and believed that Vietnamese people will succeed with even more remarkable achievements in the cause of reform under the leadership of the CPV, as well as fulfil the targets set at the 12th Party Congress.

He expressed his deep gratitude for the valuable assistance that Vietnam has given to Cambodia in the cause of national liberation and in saving the Cambodian people from the genocidal regime, as well as in the current national construction and defence.

The NA President informed the host about the positive outcomes of the talks between the Vietnamese and Cambodian National Assemblies, and affirmed that Cambodia will continue coordinating closely with Vietnam to implement agreements, treaties, and joint statements signed during the visits of leaders of the two parties and states.

The Vietnamese official conveyed the best regards from Party General Secretary and President Nguyen Phu Trong to Cambodian leaders, and thanked the Cambodian leaders for sending condolences and a high-level delegation to pay tribute to former President Le Duc Anh when he passed away earlier this year.