Prime Minister Nguyen Xuan Phuc and his Malaysian counterpart Mahathir Mohamad agreed to further deepen the Vietnam-Malaysia strategic partnership during their talks in Hanoi on August 27. 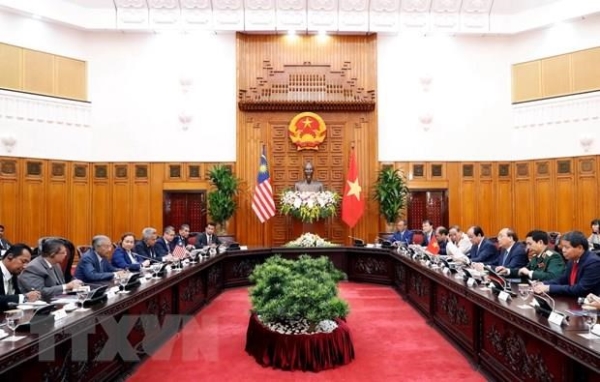 The talks between Prime Minister Nguyen Xuan Phuc and his Malaysian counterpart Mahathir Mohamad in Hanoi on August 27 (Photo: VNA)
The talks took place right after a welcome ceremony for the visiting Malaysian PM at the Presidential Palace in Hanoi.

PM Phuc congratulated Malaysia, under the leadership of PM Mohamad, on sustaining its stable growth and global competitiveness, towards the goal of “Shared Prosperity 2030”.

Mohamad, for his part, affirmed that Malaysia always attaches importance to strengthening the strategic partnership with Vietnam, which it considers a close neighbour and trustworthy partner in the region, especially within the framework of ASEAN Community.

Both sides agreed to further facilitate visits at all levels, strengthen cooperation via the party and National Assembly channels, and make effective use of bilateral cooperation mechanisms.

The Vietnamese PM affirmed that the Communist Party of Vietnam wants to further reinforce ties with the ruling Pakatan Harapan (Alliance of Hope) of Malaysia.

The two sides welcomed the exchange of letters between the two legislatures on the establishment of the Vietnam – Malaysia friendship parliamentarians’ group, and committed support for the group in working to raise mutual understanding, making further contributions to ties between the two law-making bodies and the two nations.

They vowed to early sign an action programme to realise the bilateral strategic partnership for 2020 – 2025, focusing on boosting economy ties, deepening strategic cooperation in national defence and security, and strengthening partnership in marine cooperation, innovation, science, education and labour.

They consented to promptly launch bilateral defence mechanisms, including a high-level committee on defence cooperation and naval consultations, while stepping up the signing of cooperation documents such as an MoU on defence cooperation, MoU on the establishment of joint patrol and hotline at sea, MoU on law cooperation, agreements on the prevention and control of human trafficking, and the transfer of sentenced persons.

Host and guest shared experience in the fight against corruption and agreed to extend ties between agencies concerned, considering it one of the pillar fields to build a facilitating, transparent and action-minded government.

They shared the view that economic, trade and investment relationship has been a bright spot in bilateral ties. Two-way trade between the two nations hit 11.5 billion USD last year, up over 13 percent annually. Malaysia is the eighth largest investor in Vietnam with around 600 projects worth over 12 billion USD.

In order to raise two-way trade to 15 billion USD, PM Mohamad promised to increase investment in Vietnam in fields using modern technology and with high added value, and back Vietnam’s exports to Malaysia, particularly agro-forestry-fisheries and Halal products.

On marine cooperation, the two PMs promised to share experience in building strategies for marine economy, marine science and sea energy. They welcomed the fact that the two sides have reached agreement on the content of an MoU on cooperation in legal enforcement and search and rescue at sea, a step towards the early signing of the document.

They agreed that two countries will work closely together to address issues regarding seized fishermen and fishing vessels in a humanitarian spirit and in accordance with international law.

As regards regional and global strategic and security issues of shared interest, Mahathir affirmed that Malaysia strongly supports Vietnam as Chair of ASEAN in 2020 and as a non-permanent member of the United Nations Security Council in the 2020 – 2021 tenure.

He said Malaysia will coordinate closely with Vietnam to promote the building of an ASEAN Community of unity and uphold the bloc’s central role in the regional architecture for the sake of peace, stability, cooperation and development based on rules.

The two PMs agreed that as two neighbours bordering the East Sea with associated security and interests, Vietnam and Malaysia will closely cooperate with ASEAN to ensure peace, stability, security, safety and freedom of navigation and overflight in the East Sea.

Expressing deep concerns over the recent developments in the East Sea, they stressed the importance of settling disputes by peaceful means in accordance with international law and the 1982 UN Convention on the Law of the Sea, with respect for diplomatic and legal process, refraining from the use of and threat to use force, avoiding militarisation, fully and seriously implementing the Declaration on the Conduct of Parties in the East Sea (DOC) and striving for the early finalization of an effective and legally-binding Code of Conduct in the East Sea (COC).

Following the talks, the leaders witnessed the signing of a letter of intent on the signing of an MoU on cooperation in legal enforcement and search and rescue at sea, and the exchange of letters on the establishment of Malaysia – Vietnam friendship parliamentarians’ group.
(Vietnamplus)
Tweet