Vietnamese stocks are some of the world’s most battered this year, but market watchers are backing a turnaround. 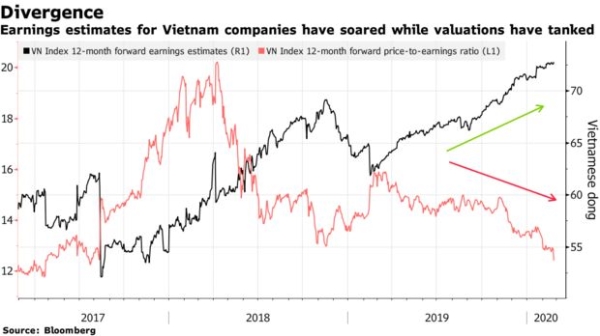 They’re pointing to valuations that haven’t been this cheap since 2017 and an economy that’s been growing 5% or more each year for two decades. The nation’s benchmark gauge has almost completely erased its 2019 returns and now trades at about 12 times estimated earnings over the next year.

Concerns about trade and supply-chain disruptions due to the coronavirus have already wiped off more than 6% from the VN Index this year. With China delaying the reopening of land borders and travel restrictions, Vietnam expects industries related to tourism, agriculture, textiles and machinery to be hit hard. But analysts so far have remained positive, projecting that the nation’s companies will manage to post record earnings.

“Vietnam is still one of my favorite countries in terms of growth prospects, valuations and dividend yield,” said Federico Parenti, a fund manager at Sempione Sim SpA in Milan. “I will surely add more shares once it will be more clear how the situation will evolve.”
The VN Index fell 0.2% as of 1:41 p.m. in Hanoi Tuesday after closing at its lowest level in more than a year.

Many acknowledge earnings for the quarter ending in March will take a hit as visas for Chinese tourists -- which account for about a third of the total arrivals -- got halted, while meetings and festivals were canceled to avoid the spread of the virus.

Even though foreigners have pulled $5.3 million from Vietnamese equity funds this year, that’s much less than the outflows from peers such as Thailand, Indonesia or the Philippines. And while the Vietnamese equity index is still 25% below its 2018 peak, it’s proved to be resilient in the long run. Since 2012, it has rallied every year except one.

Vietnam remains one of the fastest growing economies in Asia, with an expansion rate of 7% for 2019, according to official data. While the government said it may slow to under 6% in 2020, that still places Vietnam above most countries. Investors also see the market as one of the biggest beneficiaries of a shift in supply chains away from China.

Vietnam Asset Management expects the ratification earlier this month of a free-trade agreement with the European Union to also have a “significantly positive” impact on the nation’s economy. Ngo The Trieu, chief investment officer of Eastspring Investments in Vietnam, says the revision of the country’s securities law and launch of new indexes will further grow the nation’s equity market.“Sectors that directly capture the growth drivers of the domestic economy” will generate value for long-term investors, he said.