Promoting vitality of multilateralism is an urgent requirement for the international community amid challenges brought about by power politics, populism, declining political commitments and resources shortage, said a senior Vietnamese official. 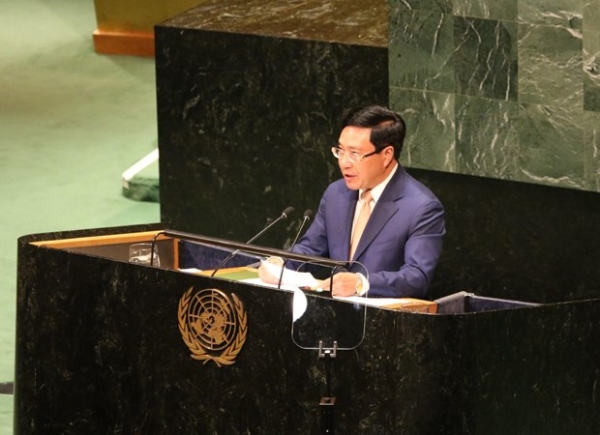 Deputy Prime Minister and Foreign Minister Pham Binh Minh made the statement while delivering his speech to leaders and representatives of 193 member countries at the General Debate of the UN General Assembly’s 74th session in New York on September 28.

The process of reform, development, and international integration is closely associated with Vietnam’s participation in global and regional multilateral institutions, he emphasised.

Vietnam has proved its role as an active and responsible partner in multilateral processes by contributing to the UN’s peacekeeping operations and sustainable development goals, he noted, adding that the country was recently elected a non-permanent member of the UN Security Council for the 2020 – 2021 tenure.

Mentioning his concerns over the recent complicated developments in the East Sea, including serious incidents that infringe upon Vietnam’s sovereign rights and jurisdiction in the country’s maritime zones as defined by the 1982 United Nations Convention on the Law of the Sea (UNCLOS), Minh stressed countries involved need to exercise self-restraint and refrain from conducting unilateral acts which may complicate or escalate tension at sea, and settle disputes by peaceful measures in line with international law, including the 1982 UNCLOS.

The official affirmed that as a non-permanent member of the UN Security Council for the 2020 – 2021 tenure and Chair of the ASEAN in 2020, Vietnam will prioritise boosting cooperation between the UN and regional organisations particularly in preventing conflicts and promoting peace and sustainability.

Multilateral efforts need to put people at heart. Lasting peace is the prerequisite for sustainable development and can only be achieved when the basic safety and living condition of the people are ensured, he said.

On the occasion, Minh attended the Informal ASEAN Ministerial Meeting (IAMM), and joined other ASEAN foreign ministers at a series of their meetings with the Gulf Cooperation Council (GCC), Pacific Alliance (PA), UN Secretary-General Antonio Guterres, and President of the UN General Assembly Tijjani Muhammad-Bande.

At the IAMM where participating countries discussed the preparation for the 35th ASEAN Summit in Bangkok, Thailand in November, Minh informed the participants on Vietnam’s preparations for its ASEAN chairmanship next year. He also voiced Vietnam’s concerns over the East Sea issue after the 52nd ASEAN Foreign Ministers' Meeting in Bangkok last August as well as the country’s stance on the matter.

The same day, meeting with President of the UN General Assembly Tijjani Muhammad-Bande, Deputy PM and Foreign Minister Pham Binh Minh said Vietnam attaches importance to cooperating with the UN and will make active contributions to the UN’s central role in the multilateral system.

Minh underscored Vietnam’s commitments to the UN’s 2030 agenda on sustainable development and Paris climate agreement while meeting with UN Secretary-General Antonio Guterres. He also shared the country’s plans for its upcoming participation in the UN Security Council and ASEAN chairmanship, thereby enhancing the relations between the UN and regional organisations./.