Placing 77th out of 117 economies, Vietnam jumped 14 spots from 2017 in this year's world ranking for budget transparency.

The country has a transparency score of 38 points out of 100, an increase of 23 points from the previous survey in 2017, according to the biennial Open Budget Score (OBS) released by U.S.-based non-profit International Budget Partnership.Its score is still lower than the global average of 45.

In its seventh edition, the survey measured budget transparency in 117 countries and territories in terms of public access to information on how central governments raise and spend public resources. It assesses the online availability, timeliness, and comprehensiveness of eight key budget documents using 109 equally weighted indicators and scores each country on a scale of 0 to 100. 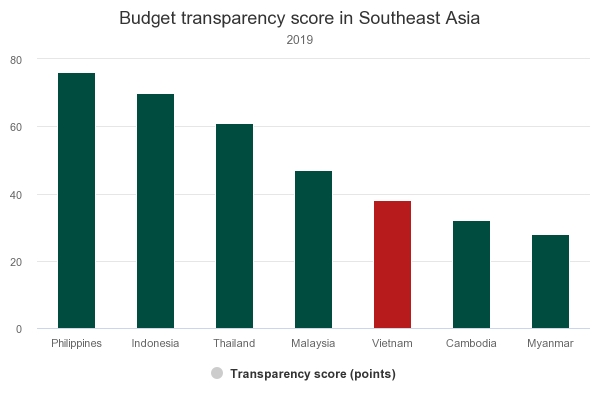 Vietnam has increased the availability of budget information by publishing its executive budget proposal as well as citizen budget and audit report online while increasing in-year reports, the survey revealed.However, the country should produce and publish a mid-year review online, which includes revised projections for the full fiscal year for expenditure, revenue, and debt.New Zealand topped the Open Budget Score index, followed by South Africa and Sweden.

In response to the OBS 2019 result, the Ministry of Finance said it is committed to ensure greater state budget transparency and wider public participation.Vietnam posted a budget collection of VND1.54 trillion ($67.4 billion) in 2019, up 8.7 percent year-on-year, the ministry said.