The Vietnamese Ambassador to the United States Ha Kim Ngoc has suggested that the US move to swiftly complete the granting of licenses for Vietnam’s fresh pomelo products in order to allow them to make inroads into the North American market. 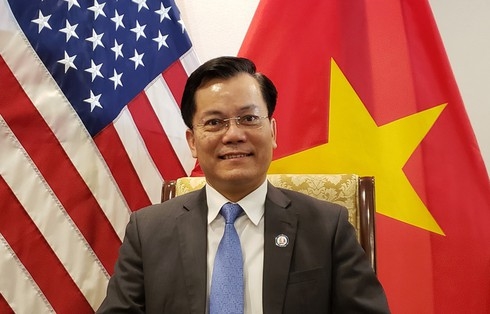 Ambassador Ngoc held phone talks with US Under Secretary of Agriculture for Trade and Foreign Agricultural Affairs Ted McKinney on May 6 in a push to promote agricultural co-operation between the two countries.
The Vietnamese diplomat and Under Secretary McKinney expressed their delight at some of the positive developments of Vietnam-US relations, while reaffirming the content of the recent phone talks between US President Donald Trump and Vietnamese Prime Minister Nguyen Xuan Phuc. This was noted along with talks held between US Secretary of State Mike Pompeo and Vietnamese Deputy Prime Minister and Foreign Minister Pham Binh Minh.

With regard to boosting agricultural trade, Ambassador Ngoc affirmed that Vietnam is striving to be active in implementing an action plan aimed at striking a harmonious and sustainable trade balance between both sides. He also emphasised the country’s commitment to opening its market and increasing the purchase of goods and services, including US agricultural products.

The Vietnamese diplomat expressed his hope that the US will soon complete the licensing procedure for local fresh pomelos and move to officially recognise the Hanoi Irradiation Center as a participant in the irradiation program for fresh fruit exports, while also including the addition of hot steam treatment measures for fruit exports to the north American country.

Under Secretary McKinney noted his great appreciation of Vietnam’s active implementation of agricultural co-operation agreements between the two countries. He stressed that the US government is also supportive of the safe use of agrochemicals, including products containing active glyphosate.

The US bureaucrat expressed his desire to see Vietnam continue to consider provisions relating to the certificate of free sale (CFS) in Decree 13, a measure that guides the implementation of the Law on Animal Husbandry. He concluded the talks by unveiling plans to visit the country in the near future.