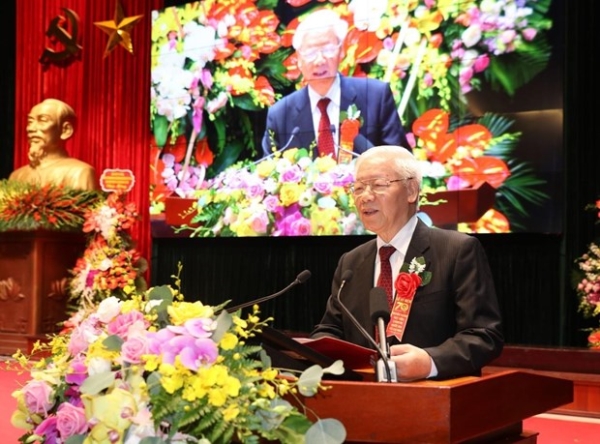 As a Party school, the primary priority of the academy is to train and provide further training for leaders and managers who are absolutely loyal to the Party’s ideal and the national revolutionary cause, and wholeheartedly serve the country and people, he said.

At the same time, the HCMA should step up the fight against wrong views and distorted allegations of hostile forces, thus helping to defend the Party, State, people and socialist regime, the leader said.

He asked the academy to focus on the quality of training while diversifying its training programmes and opening refresher courses for stategic officials.

The leader emphasised the significance of educating learners with firm political skills and spirit, ideological stance, and revolutionary ethics.

The academy should promote its role as a leading national centre for training and improving qualifications and knowledge for cadres in charge of the Party building as well as lecturers of political theory for political schools and univeristies across the country, he said.

The top leader suggested the HCMA to make greater efforts and investment in scientific research and translate outcomes into teaching, dissemination and education of politics, and policy consultancy.

The Party Central Committee is compiling draft documents for submission to the upcoming 13th National Party Congress, he said, expecting that the academy, with a large number of talented and wholehearted lecturers and scientists, would make positive and effective contributions to the preparation of such important documents.

The leader called on the HCMA to take the lead in preventing the degradation of political ideology, morality and lifestyle as well as manifestations of internal “self-evolution” and “self-transformation.”

The academy should strive to create a modern and integrated learning environment, focusing on improving the quality and international cooperation to selectively acquire global achievements and experiences in training high-quality human resources and conducting scientific research, especially in politics, leadership and management, he added./.