National Assembly Chairwoman Nguyen Thi Kim Ngan had a working session with leaders of the central province of Thua Thien-Hue on August 17, where she highly evaluated the encouraging outcomes in the province’s efforts to boost green and sustainable economic development. 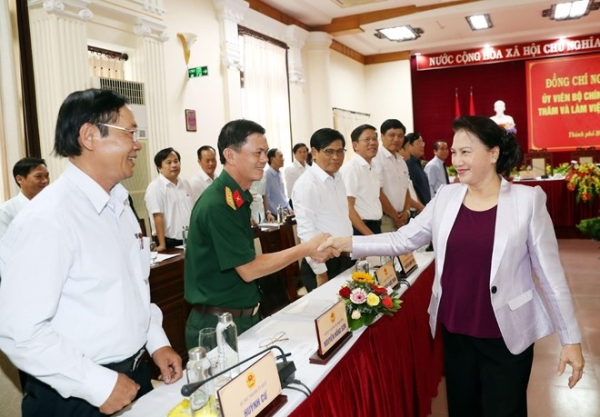 After listening to reports and assessments on the province’s situation, the top legislator recognised the province’s average growth rate of 7.2 percent per annum, which was 6.87 percent in the first half of 2019, higher than the national average of 6.76 percent.

Although the province’s economy is still small and its budget revenue remains modest, developed tourism services, with an expansion of 6.37 percent and the tourist number of 2.49 million in the six months, have helped per capita income in Thua Thien-Hue rank fourth in the central region, after Da Nang city, Khanh Hoa and Binh Thuan provinces.

Ngan also spoke highly of Thua Thien-Hue’s performance in ensuring social welfare, expanding health coverage to 98 percent of its population, and protecting the environment, which can been seen through the “Green Sunday” and “Say no to plastic bags and disposable plastic products” movements.

Regarding the focal tasks for the time ahead, she asked Thua Thien-Hue to push ahead with the Party and political system building while making strategic breakthroughs in economic development in an environmentally-friendly and sustainable manner.

She suggested the local authorities step up examination of investment projects to soon remove obstacles facing them; boost forest protection, particularly in Bach Ma National Park; promote social welfare; and improve the quality of human resources development, including fully bringing into play the role of the Hue University.

Thua Thien-Hue also needs to pay more attention to the preservation and promotion of the specific cultural values, especially the Complex of Hue Monuments, Nha Nhac (Vietnamese court music), the woodblocks and royal records of the Nguyen Dynasty, and the literature on the Hue royal architecture, which are all UNESCO-recognised heritage, Ngan added.

Also on August 17, the parliamentary leader and her entourage visited some households that are set to be relocated from areas around the walls of the ancient citadel in Hue city.