Wading in chest-high water that’s an eye-opening 60 degrees. Sleeping in a mosquito-netted hammock in the humid jungle. Scraping my hands while scaling ragged karst. Hoping I don’t lose my footing on a small, uneven rock ledge many feet above the valley floor below. The occasional bat flying past my face. This hardly sounds like a luxury vacation. 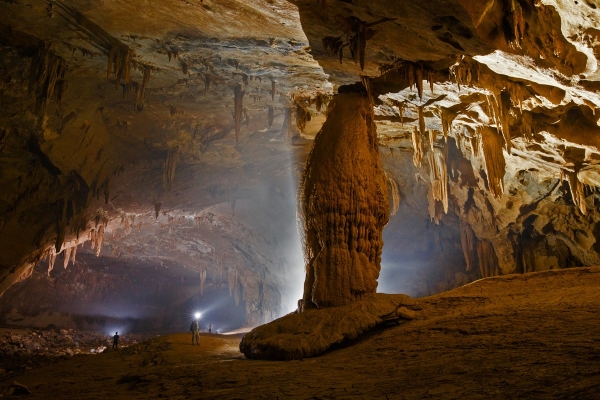 Wading in chest-high water that’s an eye-opening 60 degrees. Sleeping in a mosquito-netted hammock in the humid jungle. Scraping my hands while scaling ragged karst. Hoping I don’t lose my footing on a small, uneven rock ledge many feet above the valley floor below. The occasional bat flying past my face. This hardly sounds like a luxury vacation.

And by most definitions, exploring the Phong Nha caves in Vietnam is not a luxury vacation. But as more of us are chasing the new luxuries of one-of-a-kind experiences, nudging our boundaries so we learn we’re capable of more than we thought, going places few others go and just generally feeling like a badass, the experience fits the bill. (I like to joke that everything fun requires a waiver. This expedition reminded me that many fun things also require a helmet.)

And Oxalis Adventure Tours has found ways to make spending days and nights in caves and in jungles as comfortable as it possibly can be—fantastic local guides, porters to carry all the gear and set up camp (top-of-the-line hammocks, and also tents with surprisingly necessary sleeping bags for those who prefer a little more separation between themselves and nature), cooks who make delectable multicourse meals over camp stoves and even entertainment, as the crews like to sing by the campfire. And even while I sometimes leaned heavily on the guides—not a figure of speech—I never once doubted my safety.

An adventurer who grew up in Phong Nha Village founded the company in 2011, shortly after the caves—including Son Doong, the largest cave in the world—were discovered by a British expedition team and a local farmer within a national park that’s a UNESCO World Heritage Site. Oxalis is still the best way to explore these otherworldly natural temples with their staggering stalactites and stalagmites and kingdoms of tower cones.

I’d been hearing buzz about the caves for a while, but it was Andrea Ross of the boutique tour company Journeys Within who sold me on seeing them for myself—and made every aspect of my time in Vietnam run smoothly, from sending a representative to escort me through the hassle-prone Saigon airport to arming me with a cheat sheet of Vietnamese translations for just about any dietary restriction I might have. I figured that if the experience was up to Ross’s standards, it had to have a payoff that would outweigh the discomforts. And it would have a solid social-good component, as “active philanthropy” has been a cornerstone of her philosophy since she founded the company in Phnom Penh 13 years ago. (Disclosure: Journeys Within covered some of my travel expenses.) 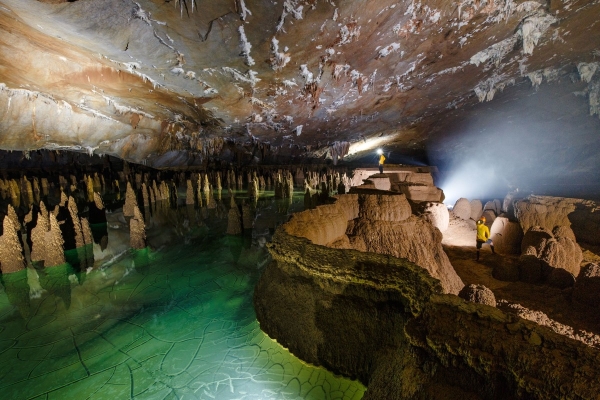 It helped that Oxalis had just started offering a new trek, to the Hang Va and Hang Nuac Nut caves, which were found in 2012—meaning that people who go now are still among the first humans to set foot in them. Some explorers say these caves are as freakishly beautiful as the more touristed Son Doong, but while that one takes five days to explore and involves camping inside the cave, the new Hang Va expedition takes only two days, with the sole night’s campsite outside the mouth of the lower cave.

They payoff for braving treacherous terrain, cold river water and the occasional dive-bombing bat is feeling dumbstruck awe about this strangely majestic underworld, and full-on wonder about what else might be hidden within this planet of ours. That, and feeling like a badass. The bragging rights are not insignificant./.