The last session of the 13th National Assembly (NA) of Vietnam will close on April 12. The Vietnamese Parliament on April 7 elected Nguyen Xuan Phuc as the country's new Prime Minister.

From the 12th National Assembly of the Communist Party of Vietnam (CPV) to the last session of the 13th NA, the leadership rotation of the CPV and have been completed.  The rejuvenation of cadres has taken a big step forward as the new leadership has composed of  senior, medium and young officials. 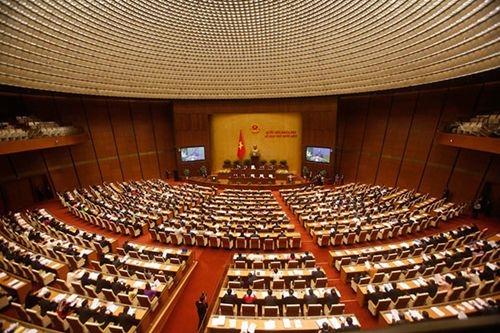 The Communist Party is the only legitimate ruling party of Vietnam. It is Vietnamese people's historical choice. The 11th Political Bureau of the Central Committee of Vietnam has 16 members, among them, 10 were aged over 65 years old and the youngest was 59 years old. Electing younger leaders had been an urgent task.

Seven members were reappointed and 12 members were newly elected in the 12th Political Bureau. Among them, Nguyen Phu Trong, 72 years old as the only exception, was re-elected as General Secretary of Communist Party of Vietnam Central Committee. 15 members are between 57 and 63 years old; two aged 55 to 56 years old and one was 46 years old.

Replace old cadres with younger ones

The 11th session of the 13th Vietnam's National Assembly nominated new leaders of each organization.

Head of State: Tran Dai Quang replaced Truong Tan Sang to become President of Vietnam, the second senior general who was elected as head of state after Le DUC Anh. Tran Dai Quang's position and roles in the future political life of Vietnam have caught the world's attention.

Vietnam adopts the system of collective leadership, which is prescribed in the party's constitution that the CPV should abide by democratic centralism.

Aged 72, Nguyen Phu Trong had been a member of six central committees and five politburos. His qualifications are far beyond other politburo members.

Nguyen Phu Trong also holds the post of Central Military Commission chairman. Tran Dai Quang has been a member of two politburos with experience almost equal to that of Dinh The Huynh and Nguyen Xuan Phuc, but is younger in age.

At the inauguration, he said that he was "the state head of the Socialist Republic of Vietnam at home and abroad, chairman of the National defense and Security Council, and commander of the people's armed force."

The foreign media believes personnel adjustments were accelerated for the power transition and to prepare for the reception of the US President Barack Obama in May.

He reviewed Vietnam's reform in the last 30 years, and highlighted tasks for nationwide development during 2016-2020.

The 12th NPC also emphasized the path of Vietnam that, "they should continue on the reforming mindset to creatively implement and develop Marxism, Leninism and Ho Chi Minh thought, and stand fast to the target of national independence and socialism."

Hanoi faces developing opportunities as well as challenges. As documented in the 12th NPC, "the four crisis pointed out by our party still remain."

He added, "Among them the economic crisis that we are more left behind the regional and global economy stands out in particular, followed by the ‘peaceful evolution’ imposed by hostile forces, and then some cadres, party members, civil servants and government workers have degenerated ways of living and certain ‘self evolution’ in political mindset and morals. Bureaucracy, corruption and waste still exist and have worsened."

This year is the start of the 12th NPC resolution. The CPV and its new party leaders are shouldering a heavy task to lead 93 million Vietnamese citizens to a prosperous, strong, democratic and civilized nation.