The United States called in late 2015 for a halt to China's artificial island-building, and in recent weeks has tried to signal its determination to challenge Beijing over the disputed sea by sending military ships and planes near the islands. 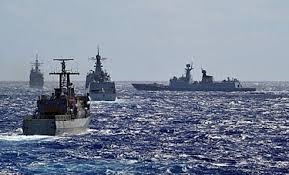 The US said it has no intention of ending patrol missions across international waters and airspace, even as China rebuked it for sending a warship on 27 October 2015 near disputed South China Sea islets and reefs claimed by Beijing. "The United States is going to fly and sail anywhere where international law allows," the White House said in a statement. It added that "we would communicate in private to China what we would say in public. These operations are conducted in accordance with international law and applied evenhandedly around the globe.”

Beijing's foreign ministry said 28 October 2015 it summoned U.S. Ambassador Max Baucus to deliver a formal protest over the incident, which represents the U.S.'s boldest challenge yet to China's controversial territorial "This action by the United States threatens China's sovereignty and security interests and endangers the safety of personnel and facilities on the reef, which is a serious provocation" Vice Foreign Minister Zhang Yesui said.

By mid November 2015 Indonesia's security chief said the Southeast Asian country could become the second in the region to challenge China's claim to all of the South China Sea. That is, if Beijing and Jakarta cannot resolve their territorial dispute through dialogue. China’s nine-dash line claim includes Indonesia’s Natuna islands.

China sent a warning that appeared directed at the United States to not engage in what it has called “provocative behavior” in the South China Sea. The warning followed news reports 08 October 2015 that the US military was planning to sail warships close to artificial islands Beijing has been aggressively building in hopes of bolstering its claims in the disputed waters. According to the reports, US officials have said they are considering sailing warships inside the 12-nautical-mile zones of the artificial islands that Beijing claims are a legitimate extension of its territory within the next two weeks [ie, before the end of October].

"The Chinese navy has closely monitored the provocative actions of the United States and issued several warnings, while exercising enormous restraint in the interests of safeguarding the overall situation in bilateral relations," said Wu Shengli, commander of the People's Liberation Army Navy, according to a report on the defense ministry's website late on 19 NOvembe 2015. "If the United States carries out repeated provocations despite China's opposition, we have the ability to defend our national sovereignty and security."

China is forging ahead with reclamation projects on at least seven tiny but hotly contested features in the South China Sea, posing a major challenge in the Philippines' international arbitration case against China. Since the beginning of 2015, satellite images of Chinese reclamation work in the Spratly Islands have shown shoals and reefs turning into artificial islands. By April 2015 major harbors that can dock military ships were nearly completed. So were several airstrips and at least three multistory buildings where bare outposts once stood.

China’s Foreign Ministry expressed serious concern on 27 March 2015 after the Philippines said it would resume repair and reconstruction works on disputed islands in the South China Sea. The ministry accused Manila of infringing on Chinese sovereignty. The Philippines had halted activities in 2014 over concerns about the effect on an international arbitration complaint filed against China.

In September 2015 an agreement was struck between Presidents Barack Obama and Xi Jinping on rules for military air-to-air encounters. The deal, which followed an earlier agreement on encounters between naval ships, was aimed at preventing encounters from escalating or causing crashes. Citing successful implementation of the Code of Unplanned Encounters on the Sea, signed by the two sides in April 2014, Assistant Secretary of Defense David Shear told Congress that he hoped for more positive results from further engagement with China.