Son Doong Cave in the central province of Quang Binh has been recognised as the largest of its kind in the world by three international organisations, including Guinness ( based in the UK), the Association World Record (based in Hong Kong) and WorldKings (based in the US and India). 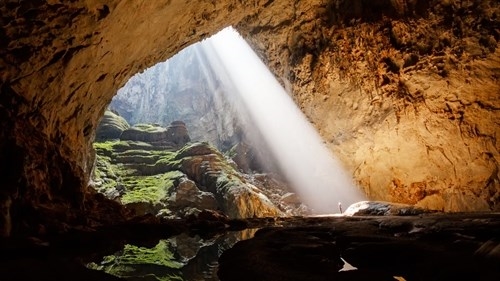 Son Doong Cave was named one of the most captivating caves on earth by National Geographic (Photo: news.nationalgeographic.com)

The Vietnam Record Association, VietKings, said Son Doong Cave is the first and only place in the world to hold titles granted by three international world record organisations at the same time.
The cave is located in the heart of Phong Nha - Ke Bang National Park in the central Quang Binh province. Son Doong was discovered by a local in 1991. It was first explored in 2009 by the British Cave Research Association and has been open to the public since 2013.
The 1,645m-long cave system, which extends through a mountain, was named one of the most captivating caves on earth by National Geographic.
Geologists say the cave formed two to five million years ago. It is roughly 6,5km long, 200m high and 150m wide, exceeding the former world record of Deer Cave in Gunung Muli National Park in Malaysia.
The 2015 Guinness Book of World Records included an introduction to Son Doong Cave and an announcement of the cave setting a world record.
To promote both the “precious gem” of Quang Binh province and the Vietnamese tourism -- and to leave Vietnam’s mark on the map of world records -- VietKings submitted dossiers to Association World Record and WorldKings in March 2016, proposing that the two organisations grant world record status to Son Doong Cave as the largest natural cave in the world.
Early in June 2016, Association World Record sent official documents announcing the cave’s world record status to Quang Binh province and VietKings.
The province also received documents from WorldKings one month later, recognising Son Doong Cave as the largest natural cave in the world and detailing its founder, exploration and legal owner.
The cave was discovered by Ho Khanh, a local farmer in 1991. The British Cave Research Association explored the cave and determined its scale in 2009.
Son Doong Cave is located in Son Trach commune, Bo Trach district, Quang Binh province.