Vietnam’s GDP in the third and fourth quarters will grow better than it did in the first half of the year as the country still has ample space for growth, a press conference in Hanoi on June 29 heard. 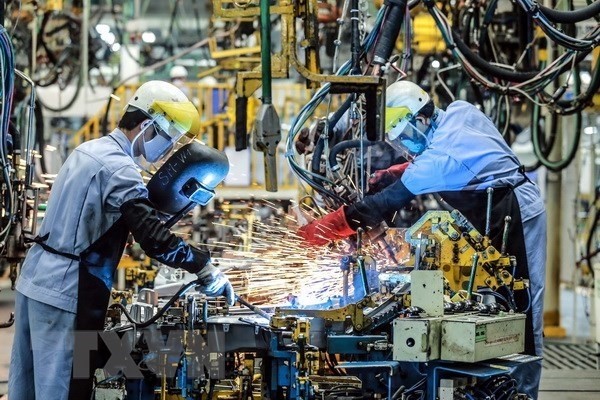 The General Statistics Office  (GSO) reported that national GDP in the first half grew only 1.81 percent - the lowest first-half rate during the 2011-2020 period.

Given the global economic downturn, however, Vietnam remains something of a bright spot, it said.
Nguyen Thi Huong, GSO Deputy Director General, pointed to positive signs in agriculture despite the sector being affected by drought, saltwater intrusion, COVID-19, and African swine fever, with rice output in the autumn-spring crop increasing year-on-year.

Industry gave momentum to the national economy, she said, rising 2.71 percent, with processing and manufacturing up 4.96 percent.

Though there were only 62,000 firms established in the first half, down 7.3 percent year-on-year, the number of new enterprises stood at 13,700 in June alone, up 27.9 percent from the previous month.

Duong Manh Hung, Director of the National Account System Department under the GSO, said that to reach the growth target of 6.8 percent, the pace must be over 10 percent each quarter, which is a difficult and even impossible task as the COVID-19 pandemic is still developing and affecting global trade.

The Government, therefore, has proposed the National Assembly adjust the growth target, he said.

However, the official stressed that Vietnam still has ample space for growth in public investment.

Pham Dinh Thuy, Director of the GSO’s Industrial Statistics Department, further explained that the disbursement of public investment would stimulate the national economy, saying if public investment rises 1 percent, it would contribute 0.06 percentage points to GDP.

Once 700 trillion VND (30.15 million USD) worth of total public investment is disbursed this year, 0.42 percentage points will be added to GDP, he continued.

Thuy also suggested businesses seek partners and promptly remove difficulties, and that the Government and the NA continue with tax and fee reductions.

Both the Government and businesses need to study solutions regarding institutions, human resources, procedures, production technologies, and business strategies to optimise and adapt to regulations in the EU-Vietnam Free Trade Agreement and the EU-Vietnam Investment Protection Agreement, he said./.