China's recent actions in the East Sea, known internationally as the South China Sea, have served to further complicate the regional situation and has contributed to increasing tensions. 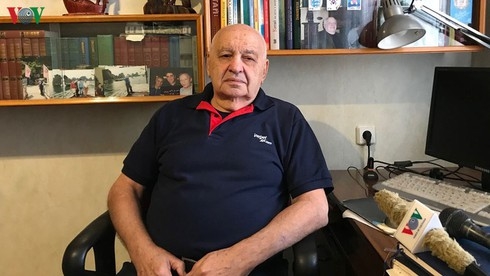 Grigory Lokshin from the Centre for Vietnam and ASEAN Studies under the Russian Academy of Sciences’ Institute of Far Eastern Studies made the remarks in a recent interview given to a Moscow-based VOV correspondent.

Here are extracts from the interview:

VOV: What do you think of China’s recent announcement of its decision to establish the so-called districts of "Xisha" and "Nansha" in "Sansha City" in an attempt to manage Vietnamese territory in the East Sea, namely the archipelagoes of Hoang Sa, also known as the Paracel islands, and Truong Sa, also known as the Spratly islands?

Grigory Lokshin: I'm very concerned regarding the establishment of two administrative hubs on the Vietnamese islands of Hoang Sa and Truong Sa, both of which originally belong to the country but were occupied by the Chinese army in 1974. The recent actions by China shows that their leaders are attempting to take advantage of the severe global crisis caused by the novel coronavirus (COVID-19) epidemic as a means of taking complete control of the East Sea and transforming it into an "inland lake".

China has no right to sovereignty over either of the islands and its actions are in violation of the UN Charter and the 1982 International Convention on the Law of the Sea, both of which were signed and ratified by China.

There is undeniable evidence that Vietnam has sovereignty over these archipelagoes in the East Sea, and this has been recognised many times by an array of international legal documents. Indeed, it was once again confirmed in a diplomatic note sent by the nation to the United Nations on March 30, along with a statement of protest issued by the Vietnamese Ministry of Foreign Affairs on April 19.

Behind the northern neighbour’s latest acts of provocation is a long-term plan to acquire three groups of islands in the East Sea, known by the Chinese as "Xisha", "Nansha" and "Zhongsha", together they are known as the "Xisha" archipelago which is directly translated from the Chinese for three islands. The fabrications put forward by both Chinese politicians and spin doctors have long been recognised by experts as legally illogical, in a similar manner that their "historical rights" in the East Sea have been devised in order to justify their illegal claims.

VOV: Do you think that China is capitalising on the global epidemic to be aggressive in the East Sea?

Grigory Lokshin: I, like most ordinary people in the world, are indignant that Chinese leaders have chosen to take advantage of the recent situation for their own benefit. Indeed, the attention of the entire world community is now being focused on coping with a terrible disaster, the fallout from the COVID-19 epidemic which originated in China and has subsequently spread to most countries worldwide.

During this difficult time, everyone can see that China is taking clear provocative steps in the East Sea to increase its regional expansion.

Who would have thought that China, the epicentre of the global COVID-19 pandemic, would put pressure on Vietnam, Malaysia, and Indonesia? Their probes, escorted by dozens of armed patrol boats and accompanied by services into the exclusive economic zones of these nations, underscores the Chinese government's negligent stance. These actions threaten Vietnam and other ASEAN members regardless of the ongoing negotiations to sign the Code of Conduct of Parties in the South China Sea.

VOV: How do China's actions affect the situation in the East Sea, as well as in Southeast Asian nations and the world in general?

Grigory Lokshin: It is clear that the recent Chinese actions have led to a more complicated and tense situation regionally.

VOV: What should Vietnam and the international community do as a means of protesting against China's wrongdoings?

Grigory Lokshin: In my opinion, Vietnamese leaders have carried out a responsible and reasonable policy amid the current situation. The country is doing everything it can to protect its sovereignty and legal interests in the East Sea, whilst simultaneously, the nation is making every effort to maintain peace and stability throughout the region.

For this purpose, in its capacity as the ASEAN Chair, the country is taking measures to unite the ASEAN community and offer common views to stand against China's aggressive actions.

Vietnam, once again in its role as a member of the UN Security Council, is doing everything possible to clarify its position and win the support of nations from throughout the international community. The country is keen to pursue an open and multilateral policy, which has contributed to raising Vietnam’s reputation in the international arena.

VOV: Thank you so much.