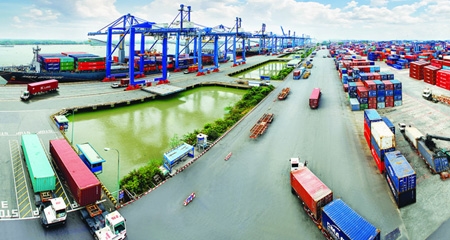 GDP growth is expected to stay in the 6% to 7% range from 2016 to 2018 as improvements in trade access compensate for slowdowns in some key trade partners. The country’s economy has also diversified with the growth in non-textile industries.

On a regional basis, domestic non-oil exports are expected to remain subdued over the coming year, leaving the economy reliant on the service sector.

Stronger government investment and solid spending by households are expected to support service sector activity but services related to oil and re-exports will be vulnerable to continued weakness in regional trade.

Singapore’s pace of consumer spending has slowed compared to its long-term average, echoing the trend towards slower growth across the ASEAN-6 economies. This suggests that while financial crisis conditions are not present, the high debt-to-income ratios of close to 150% in Singapore may already be hampering the country’s growth potential.

“As ASEAN and global economies continue to struggle with the challenging backdrop, it is natural to question to what extent the rise of China and the commodity super-cycle were mistaken for structurally robust growth in some countries,” says Tom Rogers, ICAEW Economic Advisor and Associate Director, Oxford Economics.

“The best performers in the ASEAN-6 will be economies where growth is underpinned by strong domestic fundamentals and where there is room for policy support. In this respect, we believe that Indonesia, the Philippines, and Vietnam have the best growth prospects among the ASEAN-6 countries, reflecting healthy domestic factors such as low debt, macro-stability and wage competitiveness. These factors will help them continue to gain market share in low-cost industries.”

Effect of slower growth in China

The effect of slower growth in China will vary across the ASEAN nations. China is the largest trading partner for Malaysia, Singapore, and Thailand, and the former two countries are the most vulnerable to weaknesses in the Chinese economy due to their place in the regional supply chains for electronic goods.

The declining demand and prices for commodities will also be a cause for concern.

Indonesia, the Philippines and Vietnam are less exposed to manufacturing sectors where China has excess capacity. Their wage competitiveness also means that developments in China should not significantly constrain their continued industrialization.

“As ASEAN countries continue to reform their economies and experience moderate growth in the next few years, there will still be periods of financial market volatility as they adjust to China’s new growth trajectory,” said Mark Billington FCA, ICAEW Regional Director for South East Asia.

“A deeper-than-expected slowdown in China will be the key threat to ASEAN economies, along with more acute financial market volatility and a tightening of financial conditions as industrialized countries normalise monetary policy. This will be particularly painful for countries with high debt levels.”

The protracted slowdown in commodity prices is dampening incomes, while the labour market has lost momentum. This will weigh on household spending and partly offset the boost from significantly lower inflation. However, given suitable external circumstances, the central bank may cut rates further. This, along with an 8% projected increase in infrastructure spending this year, will provide an additional boost to domestic demand.

Malaysia's risk of a ratings downgrade is growing

The latest drop in oil price and the vulnerability of the currency to capital outflows mean that the Malaysian government has limited policy room to boost growth.

The country succumbed to the classic ‘resource curse’, where the commodities sector grows strongly during a boom period and the exchange rate appreciates, leading to a loss of competitiveness and under-investment in the non-commodities sector.

As such, Malaysia will be more exposed to the negative shock to prices from the commodity down- cycle.

Growth expected to remain strong in the Philippines

Recent surveys show healthy business and consumer confidence while loose fiscal policy should support activity. Efforts to overcome spending bottlenecks appear to be working, with government expenditure growing at a much faster pace in the last six months than in preceding years./.