Prime Minister Nguyen Xuan Phuc has asked the Mekong Delta to make breakthrough changes in mindset and actions, especially amidst severe climate change impacts, so that it could attain fast and sustainable development and be on a par with other Vietnamese regions in all aspects. 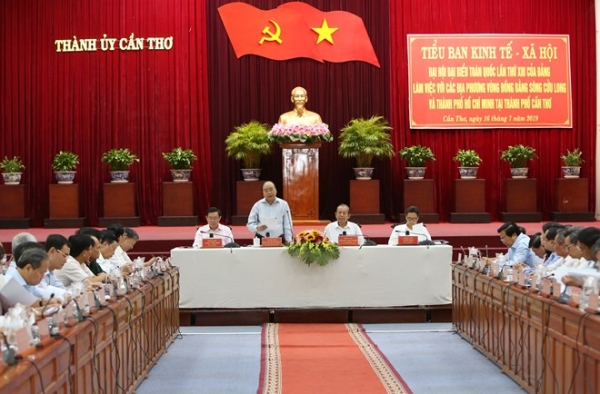 Prime Minister Nguyen Xuan Phuc (standing) speaks at the working session in Can Tho city on July 16 (Photo: VNA)

PM Phuc made the request at a working session in Can Tho city on July 16 between the Socio-economic Sub-committee of the 13th National Party Congress and officials of the 13 Mekong Delta localities and Ho Chi Minh City.

Highlighting the country’s socio-economic achievements, he said in the 2019 Sustainable Development Goals Index, Vietnam ranked 54th among 162 countries and territories, up three places from last year, and second among ASEAN nations, after Thailand.

The PM attributed those successes partly to considerable contributions by the Mekong Delta, which makes up 20 percent of the global rice market share and 80 percent of Vietnam’s shrimp production.

The local economic structure has been shifted in a positive manner with the expansion of agricultural processing and industrial product manufacturing and export.

The PM also pointed out challenges to the region, including climate change, asynchronous infrastructure, human resources that have yet to meet requirements, limited regional connectivity, and local residents’ modest income.

Noting several solutions, the Government leader underlined the need to finalise a plan with a new mindset and vision that can associate the Mekong Delta with HCM City, an economic hub of Vietnam.

He told the Ministry of Planning and Investment to coordinate with relevant localities, ministries, sectors and experts to build this plan and submit it for approval in mid-2020.

Additionally, it is necessary to build a mechanism for mobilising resources for the plan implementation, he said, asking the localities to capitalise on private resources.

Meanwhile, the Mekong Delta needs to restructure its agriculture by promoting the sector’s technological application, efficiency and adaptation to climate change, along with developing agricultural brands and the market for farm produce.

The localities should also pay attention to cross-border and sea-based economic activities and different forms of businesses, PM Phuc noted.

He asked the regional provinces and cities to further improve local human resources, which is now an urgent need, and form chains of cities to create a driving force for development.

Representatives of the provinces and cities said the Mekong Delta need to remove “bottlenecks” in terms of infrastructure, transport, land and irrigation, make breakthroughs in energy systems and expand connectivity between the localities and HCM City and the whole country, so as to ensure sustainable socio-economic development as well as defence and security.