Prime Minister Nguyen Xuan Phuc emphasised Vietnam’s aspiration to develop a strong economy in his speech at a plenary session of the Vietnam Reform and Development Forum (VRDF) 2019 in Hanoi on September 19. 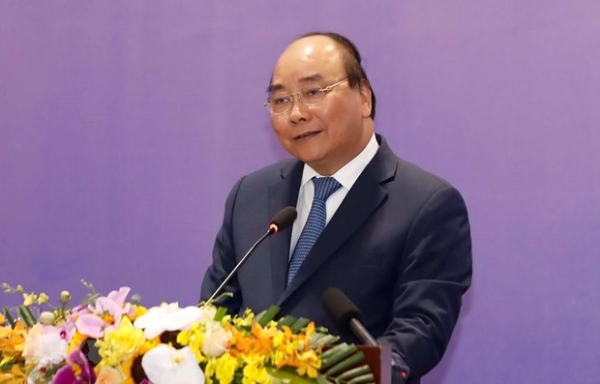 Hanoi (VNA) – Prime Minister Nguyen Xuan Phuc emphasised Vietnam’s aspiration to develop a strong economy in his speech at a plenary session of the Vietnam Reform and Development Forum (VRDF) 2019 in Hanoi on September 19.

Speaking to policy makers, development partners and domestic and foreign experts at the forum, the PM underlined that over the past 30 years of reform, Vietnam’s economy has achieved high growth, which is the foundation for the country to bring the poverty rate from a high level of over 53 percent in 1992 down to a mere 5.23 percent in 2018.

The middle class has expanded, accounting for more than 15 percent of the population, and is still growing rapidly.

At the same time, the PM agreed with international experts’ assessment about limitations, shortcomings and hidden risks of the Vietnamese economy. Vietnam's resilience and adaptation to external impacts remain weak and its capacity to access the digital economy is still limited.

Recently, the gross domestic product (GDP) growth has been sluggish while the risk of falling into the middle income trap and falling behind remains high, he said.

In 2018, Vietnam ranked third in the Association of Southeast Asian Nations (ASEAN) in terms of population but only sixth in economic size. The country’s participation in the global value chains remains limited, the PM added.

Vietnam hopes for active support from the international community to address the aforesaid restrictions, he said.

He went on to say that Vietnam is working on a development strategy for 2021-2030 amid unpredictable global developments, especially trade war, protectionism, and climate change.

In such context, Vietnam needs to maintain a peaceful environment along with political and social stability for rapid and sustainable development, he said. 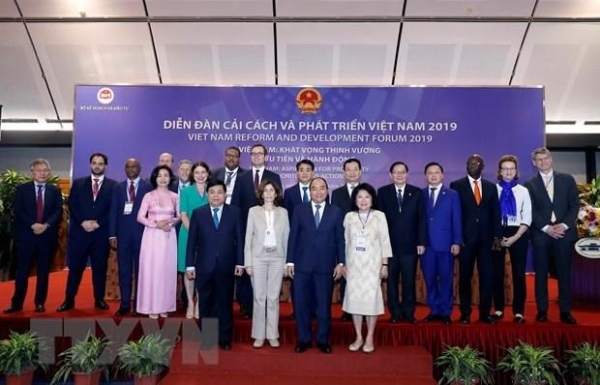 Prime Minister Nguyen Xuan Phuc in a group photo with participants at the forum (Photo: VNA)
According to the government leader, the country has been implementing three strategic breakthroughs which are improving the institutional system, developing the infrastructure network, and promoting human resources.

He stressed that Vietnam aims to develop a dynamic and creative private sector, and making businesses the centre and the momentum of development.

He affirmed that Vietnam will continuously make stronger investment in education as well as build an independent, self-reliant and highly adaptable economy, and implement sustainable development goals 2030 to bring prosperity for people with no one left behind.
At the same time, Vietnam will focus on expanding external relations and international integration while implementing effectively the signed free trade agreements and joining global value chains, he said.

He highly appreciated experts’ constructive opinions and policy ideas to improve the institutional system in Vietnam, saying these recommendations will help the country better its policy making.

The VRDF this year was organised earlier than the previous year’s event with the aim of collecting opinions from domestic and international experts for the building of a socio-economic development strategy in 2021-2030, as well as orientations and tasks for the five-year socio-economic development plan in 2021-2025, which will be submitted to the 11th meeting of the 12th Party Central Committee in October this year.

The topics for discussion at the VRDF 2019 will be more inclusive, covering the reform of the market economy institution, innovation to overcome the middle income trap in the era of Industry 4.0, and priorities and actions to build a prosperous Vietnam./.
(Vietnamplus)
Tweet