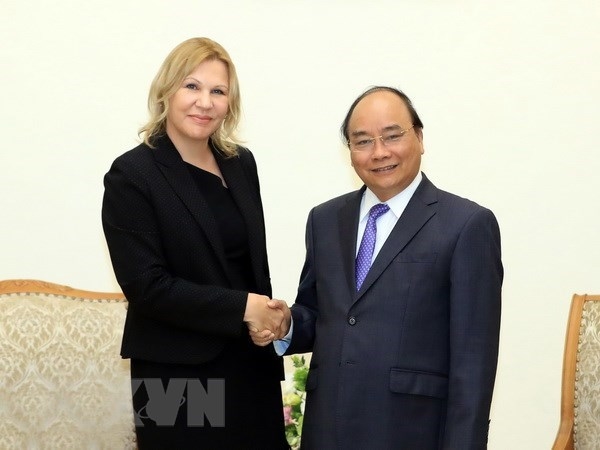 During a reception for visiting Vice President of IFC for Asia and Pacific Snezana Stoiljkovic in Hanoi on April 11, PM Phuc suggested IFC and other international organisations invest in renewable energy, that Vietnam has great potential.
He hoped IFC would cooperate with some Vietnamese financial institutions, and support Vietnam in improving its financial management capacity.
For her part, Stoiljkovic congratulated the Vietnamese Government on its effective economic management in recent times, which contributed to the stable economic growth. This is an important basis for IFC to continue cooperating with Vietnam in the coming time.
She said 2017 is a successful year for IFC’s activities in Vietnam, especially in supporting the private economic sector.
IFC wants to work with and assist Vietnam in developing new fields, thus helping the country attract foreign direct investment in those, including the development of small and medium sized enterprises (SMEs), agriculture, and renewable energy, she stated.
Stoiljkovic said IFC is cooperating effectively with many Vietnamese enterprises and banks, adding that it wants to support young Vietnamese entrepreneurs in promoting startups via IFC’s partners in Vietnam.
Agreeing with Stoiljkovic’s opinion on the importance of the private economic area, PM Phuc said Vietnam always attaches importance to the potential of the area, and target to have 1 million enterprises by 2020.
He stressed that Vietnam appreciates IFC’s support for the country in recent times, and hopes the agency will continue to accompany the country on its path of development in the future.