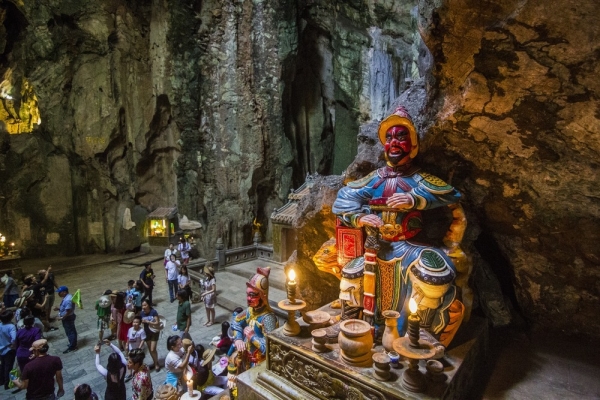 A 100 ha portion would be restored in Hoa Hai Ward in Ngu Hanh Son District, the Da Nang people's committee said.The restoration would factor in socio-economic and tourism requirements, and make the Marble Mountains a cultural and festival space, a unique entertainment destination and an important part of the "Central Region Heritage Path".

The plan would drive research for the preservation of the tangible and intangible cultural heritages of the area and its original ecology, the committee said. PM Phuc has instructed Da Nang authorities to allocate funds for the work and approve costs.

The five were named by King Minh Mang in the 19th century after the five elements: Kim (metal), Thuy (water), Moc (wood), Hoa (fire), and Tho (earth).They are home to religious ruins of the Cham ethnic people dating back to the 9th-10th century and 400-year-old pagodas.

The inscription of those who made contribution to building the pagodas 400 years ago is carved on rocks. There are also names of Japanese and Chinese merchants who traded at the bustling port town of Hoi An in the neighboring province of Quang Nam several centuries ago.In January 2019 the Marble Mountains was recognized as a special national site.