The Philippines' top diplomat said Tuesday it remains to be seen whether China will cooperate fully in ongoing efforts to craft a legally binding pact designed to prevent aggressive behavior in the disputed South China Sea. 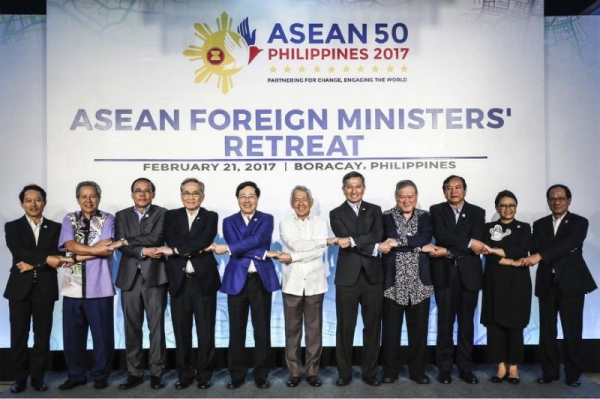 Despite the likelihood of tough negotiations ahead, Foreign Secretary Perfecto Yasay Jr. expressed confidence that the 10-nation Association of Southeast Asian Nations and China could at least complete a framework for such a pact, called a code of conduct, as early as June.

Efforts to forge such a regional nonaggression pact have dragged on for years without any concrete sign of when it might be completed. Asian and Western governments led by the United States have called for the rapid conclusion of such an accord as territorial disputes in the South China Sea escalated in recent years.

China, however, has opposed a legally binding agreement that could block its actions to assert its claim to virtually the entire South China Sea, a senior Southeast Asian diplomat involved in the negotiations for the nonaggression pact told The Associated Press.

Yasay said he was confident a framework for the agreement could be finalized by mid-year "on the basis of the fact that everyone, including all of the ASEAN member states and China are pushing hard for this."

"Whether, in fact, China will be able to cooperate along the way is something that we cannot say for now," Yasay said, without elaborating, after hosting a closed-door meeting of ASEAN foreign ministers on the central Philippine resort island of Boracay.

"China will not agree to anything that will tie its hands," said Jay Batongbacal, who heads the Institute for Maritime Affairs and Law of the Sea at the state-run University of the Philippines.

China's cooperation is crucial, Yasay said. While Southeast Asian governments generally want a strong pact, Yasay suggested the regional group would not want to craft a framework that is unacceptable to Beijing and would simply be "a piece of paper that will just further prolong discussions on the matter without getting any tangible results."

When China seized Philippine-claimed Mischief Reef in 1995, the Manila government strongly protested and took steps that led to the start of negotiations for a regional accord with China to discourage actions that might spark armed confrontations.

Bejing's opposition to a legally binding pact then, however, led to the signing in 2002 of a nonbinding declaration to encourage China, Brunei, Malaysia, the Philippines, Taiwan and Vietnam to avoid aggressive actions in one of Asia's potential flashpoints.

China and rival claimant countries, however, have traded accusations of violating the 2002 pact, which urged them to "exercise self-restraint in the conduct of activities" and refrain "from action of inhabiting on the presently uninhabited islands, reefs, shoals, cays, and other features."

In the last three years, China has turned seven mostly submerged reefs, including Mischief Reef, into man-made islands, including at least three with runways. It also reportedly installed defense missile systems on the new islands, sparking alarm and protests from rival claimants.

The Philippines used to be the most vocal Southeast Asian critic of China's actions in the disputed waters, successfully questioning the legal basis of Beijing's claims in an arbitration case Manila won in July last year. Current President Rodrigo Duterte, however, has taken steps to reach out to China and has prioritized improved economic engagement.

That has helped deescalate tensions in the disputed waters, a key waterway for Asian commerce and security, but removed a key player that had defiantly stood against China's territorial ambitions along with the United States. That raises a question about how far the ASEAN bloc can push against China's assertiveness now, Batongbacal said.

"If the Philippines won't push, Vietnam and the others won't do it alone," he said. "There will be no pressure to come up with anything really substantial."