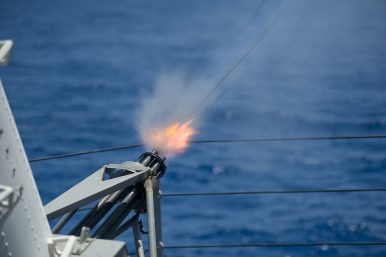 A former Australian Defense chief and a former head of the U.S. Navy both recently, separately, expressed the same opinion: that it is too late to dislodge China from its bases in the South China Sea without a clash. Meanwhile, a recent People’s Liberation Army (PLA) assessment not only places the South China Sea fourth on a prioritized list of five threats facing China, but concludes that it would only be able to effectively control parts of the disputed sea in a conflict. Despite recent elevated rhetoric from Trump Administration officials, there appears to be some consensus that neither country can establish fully satisfactory conditions over the South China Sea without unsatisfactory costs.

Speaking to a U.S.-Japan-Australia strategy conference in January, Sir Angus Houston, who led Australia’s armed forces in the mid 2000s, told attendees that it was “too late to stop the China program in the South China Sea.” In an interview to The Cipher Brief, former Chief of Naval Operations Admiral Jonathan Greenert said, “it is too late to reverse or undo [Chinese] occupancy, without risking a conflict.”

Both expressed this view after Secretary of State Rex Tillerson told Senators in his confirmation hearing that, “We’re going to have to send China a clear signal that, first, the island building stops, and second, that your access to those islands also is not going to be allowed.” White House Press Secretary Sean Spicer then told reporters that the United States would defend its interests in the region and that, “It’s a question of if those islands are in fact in international waters and not part of China proper, then yeah, we’re going to make sure that we defend international territories from being taken over by one country.” China’s official responses to these remarks have been measured, but reiterated China’s commitment to protecting its “sovereignty and maritime rights.”

In March 2016, long before Tillerson’s and Spicer’s comments, the PLA ranked a South China Sea conflict below the U.S. pivot/rebalance to Asia, war on the Korean Peninsula, and a conflict with Japan in the East China Sea in descending threat order in planning guidance recently obtained by Kyodo News. The guidance recognizes that China’s buildups on artificial islands in the Spratlys still do not guarantee its ability to exert effective control over the entirety of the South China Sea and therefore “cannot be optimistic” in a conflict. This assessment is consistent with the findings of a 2015 RAND Corporation study that the bases would be highly vulnerable in a conflict  and “unlikely to be a significant factor in high-intensity military operations against U.S. forces beyond the first hours of a conflict.”

The Asian Maritime Transparency Initiative assesses that China has constructed over 3,000 acres of artificial land on seven reefs and features in the Spratly Islands since 2013, and covered them with airfields, hangars, command buildings, and extensive sensor array. China is unlikely to be compelled to abandon such massive, and public infrastructure projects peacefully, hence Admiral Greenert’s warning that any attempt to restore the status quo ante in the Spratlys risked a military clash. Similarly, when China began deploying missile systems to its bases on the Paracel Islands last April, I underscored the political potency of China’s South China Sea bases, despite their limited military usefulness.

In a series of lectures last year Singaporean Ambassador-at-large Bilahari Kausikan argued that China’s moves in the South China Sea were primarily a demonstration to the Chinese people that the Communist Party was fulfilling its promise to restore lost territory and honor in a way that was both low-risk and low-cost compared to Taiwan and parcels that are now part of Siberia and Mongolia; “The very insignificance of the territories in dispute in the South China Sea may well be part of their attraction to Beijing for this essentially domestic political purpose.” However, given China’s investment and the high-profile and provocative nature of recent U.S comments, China is unlikely to accept the domestic political embarrassment of withdrawing from those bases.

China cannot credibly deter the U.S. Navy from operating in the South China Sea and the U.S. cannot compel China to “dig up the artificial islands it has constructed,” because the only opinion on the South China Sea that the Communist Party cares about is the Chinese peoples’. For all the attention and political rhetoric that the South China Sea garners, the best outcome either China or the United States may be able to expect is a stalemate.