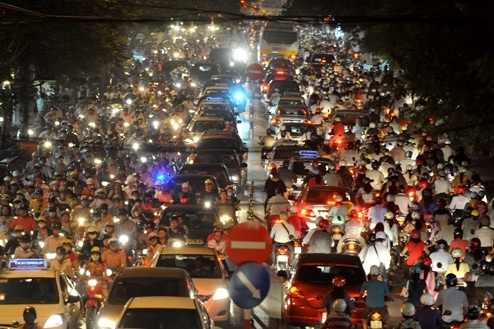 There are undulating mountains and forests, the delta areas stretching as far as the eyes could see and the East Sea seeing billows upon billows; the country’s territory stretches from Lũng Cú Peak (the North) to Rạch Tàu hamlet (the South), from Trường Sơn Peak (the West) to the Trường Sa (Spratlys) archipelago (the East).

The history of conquering nature is the glorious song, expressing the creativity and vitality, overcoming all obstructions to adapt it to the natural conditions to carry on production, existence and development of the nation. With the different natural geographical conditions (land form, soil and climate), the nationalities of Vietnam have found the different ways of treating nature.

In the delta and midland areas, the ethnic groups work the rice fields, grow wet rice plants and build the village culture with the communal houses, the wells and banyan trees being the center and bamboo groves around them. In the delta areas, the farm work and villages are the source of inspiration, the origin of the traditional clothing, pink brassieres and conical hats of the country females, of the folk songs of love duets of Bắc Ninh and of the Mekong river delta areas. In the low-lying areas of the mountains, the wet rice growers of the ethnic minorities groups have combined their farm work by growing rice plants and maize with growing the perennial industrial plants on the terraced fields. They live in the stilted houses and wear their indigo traditional costumes with patterns of wild flowers, animals and plants. They have the custom of drinking rice wine to express their profound feeling of community.

In the highlands of Việt Bắc (Northern Vietnam) and Tây Nguyên (the high plateau in Central Vietnam), the ethnic people choose the slash and burn farming method. The climate here is the subtropical climate, so the cultivation is mainly done in summer and autumn. For thousands of years, the people in the highlands have alternated their crops in order to get high income as well as protecting the soil from being eroded by summer rains. With the skilled hands of the ethnic minority girls, beautiful costumes have been made with colorful patterns suitable for their farm work on the hills. The wild forest land together with the backward farming method has engendered and developed a lot of mysterious rituals and festivals of the ethnic minority people.

Most of the highlanders have got the buffalo stabbing custom for God offering rituals, praying for good health, abundant cattle and bumper crops. These are also the areas steeped in legends and epics, the value of which can be compared to the legends of the neighboring countries. The ethnic minority people here have also created a lot of folk musical instruments such as stone instruments or lithophones (the highlanders call it goong lu), the T’rung, the Krong Put instruments, the gongs and the group dances. Along the coast from the North to the South, those ethnic people living on fishing start going offshore early in the morning and get going home late in the afternoon. Life in this area is so busy.

According to the results of the 2009 population census, Vietnam had 85,789,573 people, the third largest population in the Southeast Asian region and the 13th in the world. In the 1999-2009 period, the average increase of population is 1.2% per year, a 0.5% reduction per year in comparison with 10 previous years and it was the lowest ratio in the past 50 years.

Physical fitness and stature of the Vietnamese people have developed pretty well and improved markedly in comparison with that in 1975. After 25 years, the average height of young male with the age of 18 to 19 increased by 4.5 cm and of young female, 4 cm. It is expected that in 2013, Vietnam’s population will reach the milestone of 90 million people, one million more as compared to that in 2012./.