Chairwoman of the National Assembly (NA) Nguyen Thi Kim Ngan stressed the important role of the legislature’s external relations during a plenary session within the 30th Diplomatic Conference in Hanoi on August 16. 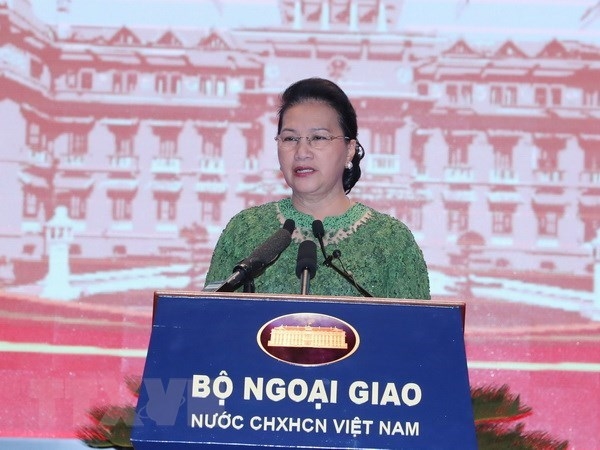 The NA’s external activities have changed bilaterally and multilaterally, as well as via friendship parliamentary mechanisms, she said, citing the establishment of the 57 specific friendship groups which have helped enhance understanding and friendship with foreign parliamentarians.
Pointing out the rapid and complex development of the regional and international situation that presents both opportunities and challenges, the top legislator said it is necessary to identify the position and significance of the legislature’s foreign relations in order to carry forward the efficiency of parliamentary diplomacy, and thus ensure national interests are kept.
Besides this, the legal system must be completed in order to facilitate external affairs in the spirit of Politburo’s Resolution No. 22 on international integration, NA Chairwoman Ngan suggested.
She also talked about coordination between channels of external affairs to maximise the nation’s strength in this regard, with focus on reinforcing relations with neighbouring countries, other ASEAN members, strategic and comprehensive partners, and traditional friends.
The coordination should also target promoting trade ties; narrowing differences and seeking new friends and partners; contributing to strengthening friendships and mutual trust with foreign countries; and gathering international support, she said.
The chief legislator added that the NA will effectively perform its membership at the Inter-Parliamentary Union (IPU)’s Executive Committee; thoroughly prepare for hosting the 41st General Assembly of the ASEAN Inter-Parliamentary Assembly (AIPA) in 2020 and taking on the role of AIPA General Secretary for 2019-2021; while constructively participating in the Parliamentary Assembly of La Francophonie (APF), the Asia-Pacific Parliamentary Forum (APPF), and the Asia-Europe Parliamentary Partnership forum.
At the same time, the Vietnamese legislature needs to engage in building common mechanisms, rules, and standards; forming a transparent, equal, democratic, and sustainable economic-political order; and utilising benefits brought about by multilateral cooperation, Ngan concluded.