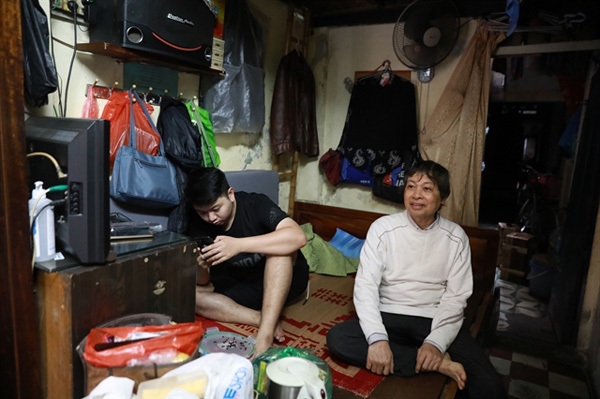 His three-generation family of seven has been cooped up in a 9 square metre house for dozens of years.Eating and sleeping both take place on the bed, he said, adding that his family shared a bathroom with six other families.

Although his home is cramped, Hai doesn't want to move as long as his family can make a living in the area.However, he said he would consider moving if the State offered compensation for relocation which would work with their business.

Many local residents feel the same way, stuck in uncomfortable, crowded and dilapidated houses.“Once a cement plaque fell on my head while I was watching TV at home,” a woman named Phuong who lives on Trung Yen Alley on Hang Bac Ward told Tiền Phong (Vanguard) newspaper.

She also said her family had to wade through water due to the submerged public toilet whenever it rained.Efforts of relocating people living in the Old Quarter to other areas began 20 years ago but to date, few relocation projects have been carried out and none are complete.

In 1998, the Hanoi People's Committee said it hoped to decrease the population density from 823 people per hectare in 2010 to 500 in 2020, improve living conditions and preserve heritage sites in the Old Quarter.Figures released in 2016 from the Old Quarter Management Board showed 800-1,200 people lived in the area per hectare.

Covering a total of 81 hectares, the Old Quarter includes 36 streets, stretching from Hoan Kiem Lake to the south, Long Bien Bridge to the north, Tran Nhat Duat Street to the east and the citadel wall on Ly Nam De Street to the west.

The streets have developed with shops in the front and living areas in the back. As a result, homes have become increasingly narrow and streets increasingly busy.

According to the plan, up to 6,500 households with 27,000 people in Hoan Kiem District were to be relocated.One proposed resettlement area covers more than 11ha in Viet Hung New Urban Area in Long Bien District and includes 16 buildings with eight to nine stories each and public works like kindergartens, schools, health clinics.

The failure has been blamed on difficulties in site clearance and compensation, as well as a lack of data on land area and house prices, according to the Hanoi People’s Council.The Old Quarter now boasts about 4,300 houses. Nearly 1,000 of them were built more than 100 years ago, while 63 per cent of the houses are degraded and 12 per cent are in danger of collapse.

To accelerate the relocation efforts, the municipal government has tasked Hoan Kiem authorities with identifying affected people in the area to prepare compensation.

It has also assigned the municipal Department of Planning and Architecture to work with the district People's Committee to study the height of the buildings and diversify types of apartments to ensure cost-effectiveness.

However, a representative from Hoan Kiem District People’s Committee said an adjustment planning for the resettlement area has not yet been finalised.According to Dao Ngoc Nghiem, vice chairman of the Hanoi Urban Planning and Development Association, it was necessary to take into account harmonisation between social infrastructure including schools, hospitals, commercial centres and green space in resettlement area to persuade people to leave the Old Quarter.

“Most residents in the Old Quarter have a medium or high income. They are not ready to move if there are no high-quality schools in resettlement areas,” he told Kinh Tế & Đô Thị (Economic and Urban Affairs) newspaper./.