Security experts have urged the Philippines to explore a common visiting forces agreement (VFA) with Japan and Australia or a trilateral deal among the three countries to counter China’s aggression and its continuing expansion in the South China Sea. 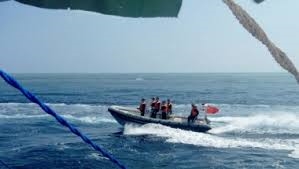 Renato de Castro urged the Philippines to explore more strategic partnerships with other countries in the Asia-Pacific, especially Japan and Australia.
“Japan and Australia hold a common view on the importance of encouraging third countries in playing active roles in regional security and the need to develop closer ties with them,” De Castro said at a recent roundtable discussion organized by private think tank Stratbase Albert del Rosario Institute.
“The Philippines might consider either negotiating or signing a separate VFA with Japan or it may extend its existing VFA with Australia to include Japan,” he added.
The country currently has its bilateral Philippine-Australia Status of Visiting Forces Agreement (SOVFA), ratified in 2007.
Another arrangement could be like the Democratic Security Diamond, an informal partnership among Australia, Japan, India and the United States, which De Castro said could help the Philippines enhance its maritime capabilities and contribute to the establishment of a rules-based order in the region.
“Democratic Security Diamond is relevant to the Philippines in order to develop and enhance the maritime capabilities of the Philippines in the face of China’s expansion in East Asia. Specifically, capacity building efforts and attempting to reorganize regional security architecture through establishing a rules-based order in East Asia,” Stratbase ADRI president Dindo Manhit said.
“Maximizing the Japan-Australia Strategic Partnership efforts for capacity building in parallel with healthy relationships with the US will greatly benefit Philippine interests,” Manhit added.