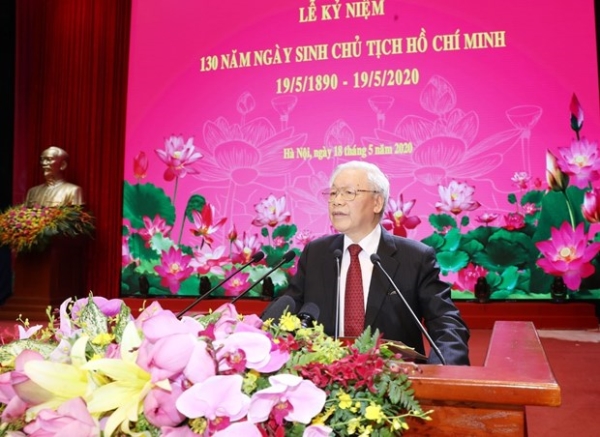 Party General Secretary and State President Nguyen Phu Trong told the gathering that President Ho is a symbol of patriotism and revolutionary heroism.

He was the crystallization of the morality, knowledge, mettle, and conscience of the nation and the era, Trong said.

President Ho devoted his entire life to the glorious revolutionary cause of the Vietnamese Party and people and international friends, he went on, stressing that his fame and career will forever be in the hearts of Vietnamese people and humankind.

He passed down a valuable ideological heritage and is a shining example of morality and lifestyle to the Vietnamese Party and people, Trong said.

Recalling the late President’s glorious life and revolutionary career, he said President Ho’s thoughts are a comprehensive and profound system of views on basic matters in Vietnam’s revolution and are the result of the innovative application and development of Marxism-Leninism to Vietnam’s specific conditions and the promotion of traditional values and the absorption of humankind’s cultural quintessence.

His thoughts are also a precious spiritual asset of the Vietnamese Party and people that forever light up the revolutionary cause of the Party and people from victory to victory and contribute to the common struggle of nations around the world for peace, national independence, democracy, and social progress.

The founder and mentor of the Party, President Ho always paid special attention to Party building, in order to make it a truly revolutionary Party that has morals and is civilized.

President Ho is a shining example and model of revolutionary morality, the senior leader said, and he urged officials, Party members, and the people to follow his teachings and examples to perfect themselves.

Trong pointed out the tasks ahead: continuing to enhance the building and rectification of the Party and the entire political system, making them pure and strong in politics, ideology, organisation and morality; and improving the leadership, governance and combat capacity of the Party and building a socialist State ruled by law, “of the people, by the people, and for the people.”

It is necessary to promote the close-knit relations between the Party and the people, build the Party based on the people, promote the people’s democracy and right to ownership, and preserve solidarity and consensus with the Party, he said.

“In following President Ho’s instructions on enhancing revolutionary morality and sweeping away individualism, we need to resolutely, persistently, and actively purify the Party, prevent and drive back corruption, degradation in political ideology, morality and lifestyle of officials and Party members, and phenomena such as ‘self-evolution’ and ‘self-transformation’ within the Party,” he stressed.

Trong called for greater efforts to complete targets and tasks, first of all dealing with the adverse impacts of COVID-19, ensuring social welfare while optimising opportunities to fulfil socioeconomic development tasks in 2020, thus successfully completing tasks set for the Party’s 12th tenure and the 2021-2020 period and preparing and organising all-level Party congresses towards the 13th National Party Congress./.